So here it is ! At last ,The Blue Aeroplanes hit us with their new studio album Welcome, Stranger!, a mere six years since previous album 'Anti Gravity'. 'Welcome, Stranger!' is album number 12 for the Bristol art rock heroes, and never more keenly anticipated by their fiercely loyal fans.

Over the years, the Aeroplanes have been somewhat a revolving door band, think The Fall or The Wedding present for ex members, and the list of alumni even inspired a t-shirt, however things have changed recently with their most stable line up ever actually. Always centred around chief pilot Gerard Langley, the band boasts 3 talented and energetic guitarists in Bec Jevons, Mike Youe and Gerard Starkie. The rhythm section co-pilots are drummer John Langley bassist Chris Sharp, and of course, on dance, the inimitable Wojtek Dmochowski.

The album opens with what has already become a live favourite over the last year or so 'Looking For X’s On A Map'. A portentous opening, all drums and chiming guitars, makes way after a minute for the cue to go nuts in front of the stage. Aeroplanes albums have always been a mixture of guitar driven chorus singalong, and sublime poetry spoken/sung over a backing track. This opener falls into the former category and is the perfect start to the 40 odd minutes.

Another song in the same category and surely to become another firm live favourite is 'Dead Tree! Dead Tree!', with chant-along chorus and typically enigmatic lyrics.

'Standing on the cusp of getting it right', it probably won’t work out, but it might” If there was ever a more pertinent or indeed typical Aeroplanes rhyming cuplet, then I’ve yet to hear it, and this welcomes in the wonderful Nothing Will Ever Happen in the Future, with its gorgeous surprise of added strings into the mix.

Bec gets her own song three quarters of the way through the album, the more straightforward rocker 'Skin' (Rodney Allen’s Fun is the obvious comparison), and it acts as a pallet cleanser for the final two tracks.

The sublime 'Here Is The Heart of All Wild Things' is the penultimate track, and the song that has got under my skin the most since absorbing the album. Based around a warm and muted guitar riff, the mid paced track descends into a full on rock out of slaying guitars.

Finally, 'Cat-Scan Hist’ry' has now got a rival for best Aeroplanes album closer in the beautiful 'Poetland'. Yes, its Gerard reciting a poem over the band with added piano - another lovely surprise. And what is Poetland ? Well, its like Poundland...only weirder.

It’s easy to be nostalgic with the Aeroplanes, especially during the heady years of the mid 90’s, but its now time to talk about the present and the surely bright future of the band. This is a magnificent album, closest in tone to 'Beatsongs', yet quietly evolving their sound and direction too. Its fresh, its dynamic, its layered and most of all, it’s a new Blue Aeroplanes album. Everyone rejoice. 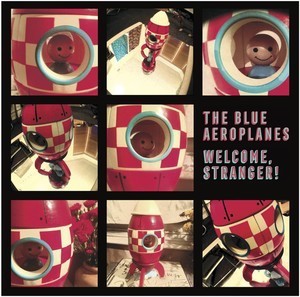 You can pre-order the album via PledgeMusic HERE