Andy Taylor, the songwriter, guitarist and singer behind hits from Duran Duran, Thunder , The Power Station, Robert Palmer, The Almighty , Gun and many more is to play an intimate UK tour this May.

This follows Andys recent sold-out 100 Club show with details of a UK tour set for this May including a very special homecoming show in Cullercoats, Tynemouth where Andy grew up .

After recently releasing 'Love Or Liberation, r to specialist radio featuring guest vocals from REEF frontman Gary Stringer, the former Duran Duran and Power Station guitarist will be previewing more songs from his new album which is due out later this year on BMG Records.

Of this special homecoming show, Andy says “It was exactly 40 years in May 1980 when I left Cullercoats & started Duran Duran so in my heart I felt that going back to Cullercoats, to the club my grandfather co-founded & where it all began for me, seemed like the right thing to do - And me Nan would haunt me if I missed her out”

“I also wanted to play SOME other cities that hold a special place in my heart - So for starters we’re making noise in Glasgow, then Manchester and of course Birmingham too”. Sadly there’s no Rumrunner anymore "

Andy will again be joined on stage by REEF frontman Gary Stringer alongside fellow REEF rockers Jack Bessant and Jesse Wood with Skindred Drummer Arya Goggin on the sticks, who also performs on the new album.

You can listen listen to Andy Taylor - Love or Liberation Here 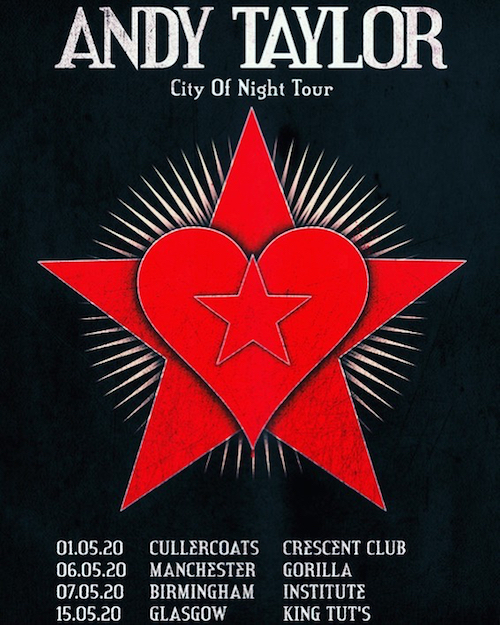