Foxing are playing a run of European and UK live dates this month which includes shows in London and Brighton as well as a slot at the Latitude Festival. on 19th July.

Foxing released latest album 'Nearer My God'  in August, 2018, via Triple Crown Records. Created over the course of nearly three years, 'Nearer My God' was produced in St. Louis and Montreal by Walla and Hudson, with additional help from Joe Reinhart (Hop Along, Modern Baseball).

'Nearer My God' took the band nearly three years to complete, but that time was well spent re-focusing on the future of Foxing. What preceded 'Nearer My God’s newfound energy was the emotional and physical fatigue that came from years of their relentless drive. Their last album, 2016’s 'Dealer', helped push the St. Louis group to entirely new heights;  and the band spent nearly 2 years off and on the road in support of it. 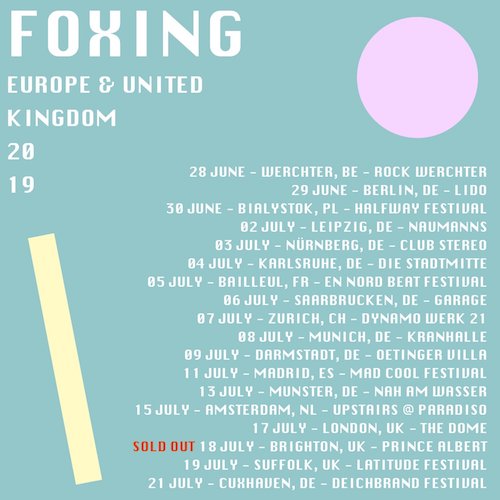