Tonight we have three bands and the sold out capacity audience in this wonderful church are certainly in for a treat.

Owen Kennedy from the isle of Eels (Ely). Young and certainly someone who has been listening to Red House Painters and Sun Kil Moon or if not, should be. Owen’s sound comes across as very Mark Kozalek like and the band are certainly one to see again.

Tour support Able Noise are a sound to behold. An experimental baritone guitar and drum duo, there is a depth to their music that needs investigating further.

Caroline are an eight-piece London based band who are totally unique. All fine instrumentalists, they stand in a circle, facing each other. First thing you notice as they start playing is just how in sync they are, in attitude as well as musical timing. No egos, just a collective whole. Happy, not pretentious.

As the musical pieces slip by in mainly darkness (with the lights coming on now and then, blinding everyone for a moment) your mind drifts with the music. Are we listening to a happier version of the Wicker Man soundtrack? (Original version not the new one obviously).

The music and vocals are spellbinding and the surroundings of a church and an attentive audience only adds to the magic of the night.

Let’s see where this unique band heads next. 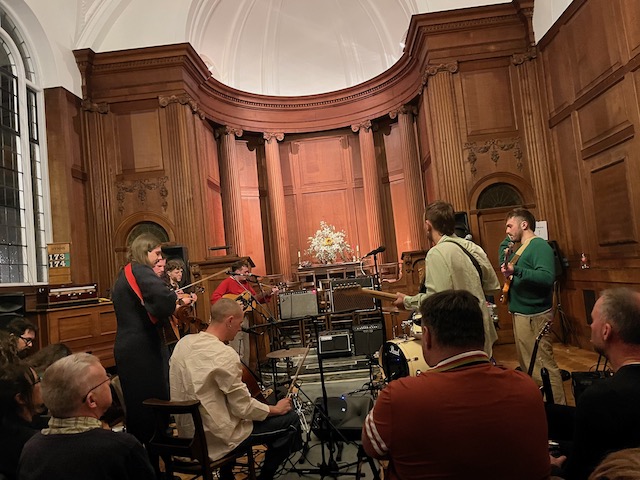