Another show promoted by Cosmic American Music who do a terrific job bringing American roots, Americana and new Country music to the Midlands which is one of the few good reasons to venture outside on a bitterly cold Nottingham night. Tonight at the Running Horse is Native Harrow their most recent album 'Closeness' provided one of the musical highlights of 2020.

Opening is Jason McNiff whose 2003 album 'Nobody's Son' was Americana UK's album of the year. Jason plays a set of beautifully finger-picked tunes about his time in Nottingham as a student (he was kicked off his course), a mid-Winter songwriting retreat in a freezing cold Cadiz hotel and a lovely Townes Van Zandt cover (we were offered a choice of covers between Townes and Dire Straits).

Jason recalls that his first ever gig was as a student in the same venue during which he nervously played Bob Dylan covers to three people who drifted off to the bar well before he finished. Tonight he holds the whole room entranced by his songs and outstanding guitar playing.

“Its been a long time, we're here to play some songs” says Devin Tuel singer and guitars in American duo Native Harrow. The first four tracks are all from the 'Closeness' album. Starting with the 1970's groove of 'The Dying of Ages', other half of the duo Stephen Harms provides some sublime slide guitar for the folk-pop of 'Smoke Burns' and 'Turn Turn' which Devin describes as from her Billie Holiday period benefits from Stephen's beautiful jazzy guitar accompaniment. One thing which ties the show together is Devin's amazingly emotional and powerful vocals which grabs your attention as they fill the room. This also comes to the attention of a couple in the audience who agree with a possibly alcohol-induced, enthusiastic and creatively expletive phrase delivered at high volume, which causes a lot of amusement on stage.

The band have moved through several cities in the States ( Devin found the 'Southern' politics of Nashville uncomfortable) and are now living in Brighton where the sound of the seaside gulls apparently provided a romantic (each to their own I suppose) and inspirational source for Devin's songwriting. Several new tracks feature tonight; 'Turn It Around' is the recent single release, 'Old Kind of Magic' is a great tune and the organ accompaniment on 'Song for Joan' is particularly notable and all promise great things for the next album.

The majority of the remainder of the set is from the 2019 album 'Happier Now' which has a more traditional folk-country feel. Highlights are the “....fly into your arms” passage from 'Hard To Take', the title track which is closer in feel to the 'Closeness' album and the marvellous 'Something You Have' which has the feel of Laura Marling in one of her more electric moments.

After a two song encore of 'Even Peace' and ' How You Do Things' the evening finishes all too soon. Devin hopes that they'll be touring again soon and if you get a chance to see this wonderful duo you won't regret it. 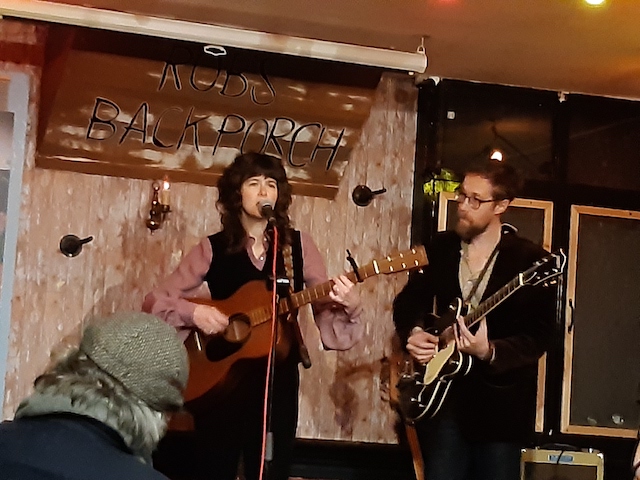