My first concert in 20 months (discounting two socially distanced shows). On 10 March 2020 I saw Frank Turner solo in Middlesbrough. Frank ended up having to cut his tour short. For the first year of the pandemic I thoroughly enjoyed livestreams. Nick Cave solo, Celtic Connections and Lucinda Williams' Jukebox are some highlights that come to mind.

Yet after a year I suddenly had enough of them. And during the summer, as festivals started happening in mainland Europe and the UK, I got frustrated waiting for the end of Ireland's seemingly never-ending lockdown. Live music proper only started up again in the Republic four weeks ago.

One of the last livestreams I watched was Saint Sister's album launch in July. They performed their second album 'Where I Should End' in full at The Complex in Dublin, backed by the musicians who played on that album, with guests Crash Ensemble and Lisa Hannigan. It was a sumptuous affair and I decided there and then that I wanted to go and see them. Their Dublin Olympia concert only had 'nosebleed' seats left, so I randomly chose another town.

I travelled to the walled city of Derry; a home gig of sorts. Saint Sister are Gemma Doherty from Derry and Morgan MacIntyre from Belfast. Their parents were sitting right behind me. I saw a lady so like Gemma that it had to be her mother. Morgan's mother I recognized from a photo of her holding the Northern Ireland Music Prize, which Saint Sister won last week for 'Where I Should End'. They had been unable to attend the ceremony as their tour had started.

The show at the Nerve Centre was seated and close to sold out. Support came from local singer Reevah, who usually performs with a band, but on this occasion had one accompanist. I had heard from others that despite waiting for over a year for their first post pandemic gig experience, as soon as it starts, it all feels surprisingly familiar. And so it was for me too. I wanted to sit near but not quite at the front, in the centre for the best sound. When Reevah announced her last song I got ready to beat the bar queue.

During the interval Michael McGoldrick's 'Aurora' album blasted out of the PA, which was a real treat. They put it on again at the end of the evening. Big thumps up to whoever made that choice. Beautiful album.

I had seen Saint Sister a few times early on in their career, but then lost track. It was that livestream and the strength of their second album that got me back. I was a little disappointed that the band from the livestream was not with them, but I guess one has to be practical in these unusual times. It was impressive to hear how well the songs held up with just two voices plus one instrument. Gemma alternatively plays harp and keyboard, and occasionally uses a loop pedal for some percussive sounds. Morgan sings. From a recent interview on 'Other Voices' I learned that Morgan writes the lyrics. The songwriting for me the main thing that make Saint Sister's self-styled atmosfolk so unique. Their harmony singing is really special too. The audience was completely quiet, which is what this music needs.

The only songs where I missed additional instrumentation are their two danciest numbers, 'Any Dreams', which is crying out for a full on techno remix, and the wonderful 'Karaoke Song', the final song of the night.

I could not have wished for a nicer return to live music. Thank you Saint Sister. Long may you continue to do what you do. 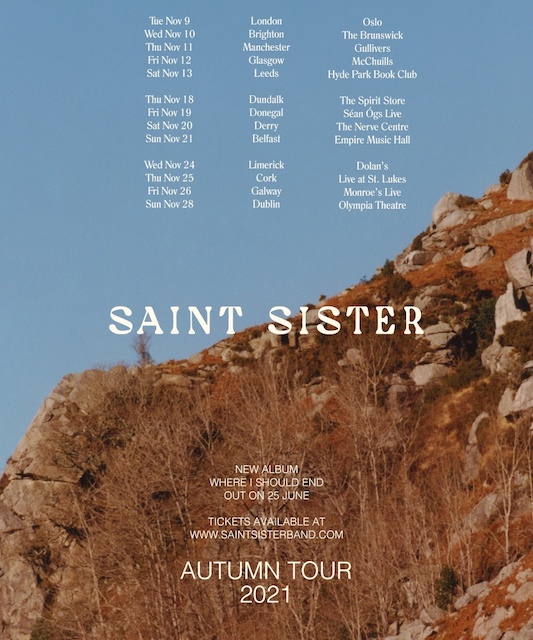