Positives to come out of the pandemic ? Well not many, but the concept of socially distanced gigs has at least meant a few new venues have popped up on the gig circuit that promoters might not otherwise have considered. And so it is that we find ourselves at the Constitutional Club, Lewes, West Sussex on a Sunday afternoon. An extremely tidy social club with a good-sized performance space leading off from the main bar area.

Penelope Isles are putting on two shows today, a ‘matinee’ kicking off at 5.30 as well as a later performance. It was simply exhilarating to be in a room with like-minded souls even though they numbered no more than 30, and thrilling to drink in a live rock n roll performance.

Some line-up changes saw two new faces in the band. Joe on drums and guitarist Henry (who we have seen with the band previously) joining brother and sister Jack and Lilly

Penelope Isles’ debut album Until The Tide Creeps In has been embedded in our music psyche for some time so we weren’t disappointed to enjoy a set of 11 songs that combined highlights from that album alongside seven new tunes. Energy levels were high from the off as they kicked straight in with two new songs ‘Sailing Still’ and ‘Have You Heard’, the opener a 9-minute rockin tune which carries the hallmark of a future set-closer.

This band have always been tight musically and the line-up changes do nothing to diminish a feeling of togetherness, displayed particularly today on older favourites ‘Cut Your Hair’ and ‘Gnarbone’ which saw Jack and Henry duelling on guitars with Lilly, centre-stage, wielding bass and keeping the protagonists apart. Heart rates were then allowed to subside with new number ‘In A Cage’, a beautiful tune introduced by a soundtrack of birdsong.

Energy levels from this band’s set are maintained through Jack and Lilly switching vocal duties and Lilly herself flipping between thumping bass and tuneful keyboards. And between enjoyable glances back to old favourites ‘Chloride’ and ‘Leipzig’ we were treated to new song ‘Soduko’, before ‘Camera’ with an 80s feel building to trademark searing guitars. The set was brought to close with ’11 11’ another gently sung number from Lilly.

“As a new line up that’s all the songs we know” said Lilly in response to chants of ‘more!!’ “but here’s one we tried today” a short tune which conjured images of paddling in the sea with Lilly singing “white horses kissed our feet”.

Feet kissed or not we were blessed to be here today. Wonderful band. Wonderful LIVE music 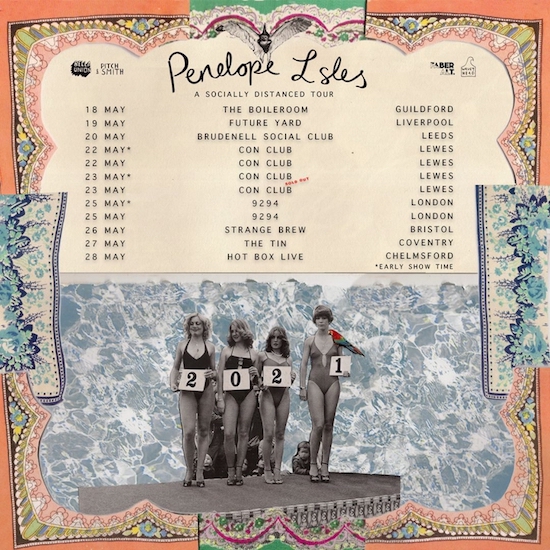