Before anyone decides to inform the authorities of an illegal, socially non-distant house party in the Barnsley area this show is folk duo Gilmore and Roberts' last Patron gig before Katriona Gilmore's maternity leave starts. The show is being live streamed from their garage which they recently had converted into a performance and rehearsal space.

Tonight the show starts with Katriona on mandolin and Jamie playing his guitar in the 'lap-tapping' style with the guitar placed in his lap, strumming the strings and cleverly using the guitar's body as a percussion instrument. The lack of audience is felt as there is nobody to provide the “oh, oh, oh” part of the chorus in 'Cecilia' from 2015 album 'Conflict Tourism. The same set up is used for 'The Stealing Arm' a song based upon a story from 1888 by John Ashton. The protagonist loses an arm in battle and an unscrupulous surgeon replaces the arm with a thief's limb which subsequently possesses the soldier and converts him to a life of crime. Surely a script for a horror movie waiting there.

Katriona admits she's had to extend her mandolin strap to accommodate the change in dimension (“deep rather than wide”) caused by her baby bump. There's a nice improvised guitar solo added into 'Silver Screen' and lovely fiddle on the Americana style 'Off to California'. A couple of tracks show how well their vocals harmonise together; 'Just A Piece Of Wood' a song written by Katriona about the history of her fiddle and a lovely cover of Cindy Lauper's 'Time After Time' the duo's acoustic version seems to give the song room to breathe and benefits from it.

When performing 'Selfish Man' in front of an audience there is a vocal 'round', with the audience, Katriona and Jamie each taking separate vocal parts which harmonise delightfully. Jamie confesses this to be his personal high of their show and despite only 2 of the required components being present it's still a great track. Final song is a blast through 'Stumble on the Seam' the interplay between the fiddle and guitar in the instrumental break being a highlight.

Katriona shares some thoughts that probably mirror those which many of us have about the future of live music when she says that she “hopes that the few gigs we have booked over the next few months do happen..but it's a strange feeling not knowing. I hope we all stay safe.” In the meantime enchanting shows like tonight will have to fill the gap. 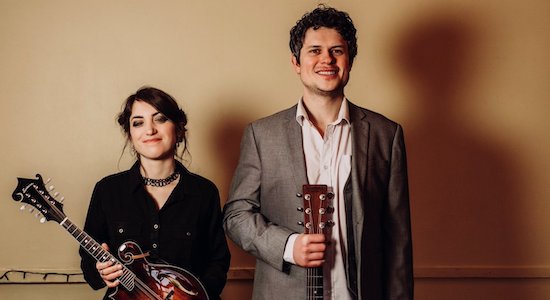