Patti Smith turned 74 on 30 December and celebrated this with livestream. Unlike many livestreams that come with a replay option, this one was live only. The show went out at 9 p.m. New York time, which was 2 a.m. GMT. I had set the alarm and can report it was well worth getting up out of bed for.

Patti had spoken to Rolling Stone prior to the concert and stated: “We’re not going to try and make an approximation of a concert. I just want to do a good job. It’s really that simple. Doing it with the band, we have half a century of camaraderie. We’re all people who care about each other.”

Patti was accompanied by Lenny Kaye and Jay Dee Daugherty, both of whom have been playing with her since ‘Horses’. Tony Shanahan joined her band in 1996. Also with them was Patti's son Jackson Smith. Jackson apparently had driven down from Michigan. Patti mentioned that people had quarantined and been tested. They were positioned apart from each other and the band wore masks for the majority of the gig.

Patti was in great voice and it was a wonderful performance, with songs from all throughout her career. Patti said they had opted for "the songs that are most requested". This meant two songs from 'Horses', three from 'Easter' and one each from 'Wave', 'Dream Of Life', 'Gone Again', 'Gung Ho' and 'Trampin''.

The stream was filmed at Electric Lady Studios in New York with filmmaker Steven Sebring at the helm. It had been made to look as if the band were in the backroom of a pub, with table lamps, mirrors, radiators and Persian rugs. Patti’s introductions added to the homely atmosphere.

Lenny Kaye had had his birthday three days earlier. Patti and her lifelong musical partner were born three days apart, in 1946. In this day and age it is great to see musicians who are not afraid to look their age. I had to think back of something said by none other than the Dalai Lama, when he guested during Patti's Glastonbury show in 2016: "I see white hair, but so much energy". The Dalai Lama had found their youthful energy very inspiring, he later said in an interview.

During the show Patti read out a poem. She also described the moment: “A birthday night, a full moon, a new year to look forward to". Those who follow Patti on Instagram will know that she is a master at making the ordinary extraordinary. She finds poetry in everyday things and occurrences.

Towards the end of the show daughter Jesse Paris Smith, herself recently Grammy nominated for her album ‘Songs From The Bardo’, brought in a cake. She joined the band on piano for 'People Have The Power’, a song that never fails to give me goosebumps.

When I got ready to go to bed in the early hours of the morning I had a flashback to my teenage years, when my experience of live music was solely via TV. I grew up in a small Dutch village, far away from places where concerts happened. I was an avid viewer of the ‘Rockpalast Nacht’, an all night live music marathon on German TV. How curious that in 2020 things have come full circle. 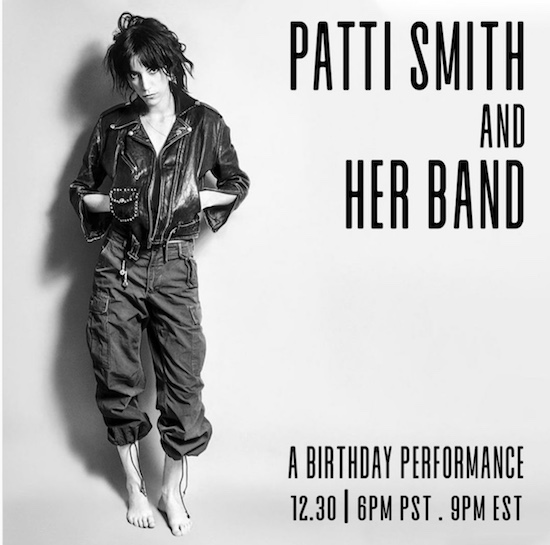 Beneath The Southern Cross

People Have The Power