There is a tremendous appetite for live music in Ireland as there is elsewhere I guess. Away from the glare of the capital, enterprising souls have been putting on small gigs, to great success. The Doolin Hotel in County Clare have their Spaced Out Sessions, which so far have featured Lisa Hannigan, Sharon Shannon and Scullion amongst others, and which are ongoing. They have had to add matinee shows to meet the demand for tickets.

Sligo’s Hawk’s Well Theatre meanwhile host the Safe & Sound Sessions. A concert by Cathy Jordan coincided with me being in that part of the country, so I was absolutely thrilled to be able to go to an actual gig, six months and a day since my last live concert.

Cathy Jordan is the singer and frontwoman of trad band Dervish, recipients of the Lifetime Achievement Award at last year’s BBC Radio 2 Folk Awards. She is also a member of The Unwanted, who have released two great albums of old time music and folk ballads. On her solo album ‘All The Way Home’ Cathy approached traditional songs as well as some new compositions in a fresh way by working with a Swedish producer, Roger Tallroth from the band Väsen.

Recently, during the first two months of Ireland’s lockdown, Cathy has been posting a daily video online, broadcasting from her home. The Lockdown Singalong attracted a worldwide audience, judging by the reactions Cathy would read out. She tackled a traditional song each day, accompanying herself on a variety of instruments, and giving us historical background to the songs. She did 60 songs in all, which can still be viewed on Dervish’s Facebook page.

Surprisingly enough Friday’s concert was actually Cathy’s first ever solo gig. The Lockdown Singalong had made it clear that she would have no problem performing without her bandmates. Cathy accompanied herself mostly on guitar and ukulele, sometimes whistling as well. She played bodhrán on ‘Madam I’m A Darlin’’, learnt from the singing of Frank Harte. One of the highlights was when she picked up the accordion (“It’s not just a prop you know”) for ‘The Old Churchyard’. Cathy also talked about the journey the song ‘Barbara Allen’ has been on and gave us a rendition of it.

She mentioned Steve Earle, who guested with Dervish on their ‘Great Irish Songbook’ album. Cathy joked that Steve surely should be given the freedom of the city of Galway, for all his association with the place. Steve of course wrote ‘The Galway Girl’. The song that he recorded with Dervish, and which Cathy sang during her show, was ‘The Galway Shawl’. As she got the crowd to sing along (a very strange experience singing through a mask...) I suddenly remembered the last time I heard her sing that song, when Dervish played the Acoustic Stage at Glastonbury 2019. Different times..

As a Lankum fan I have to note the probably coincidental repertoire overlap between Cathy and the Dublin band. At the concert Cathy sang two songs that Lankum play as well (‘The Tri-Coloured House’ and ‘The Pride Of Petravore’), and she has also recorded ‘What Will We Do When We Have No Money’. Furthermore Cathy sang a song she wrote herself about the Curragh Wrens. I was unfamiliar with this intriguing part of Irish history until hearing Lankum talk about their song ‘Hunting The Wren’.

Cathy said how great it was to be out in front of a live audience and jokingly thanked us for taking a chance with our lives. She had not brought any CDs as she thought “that would be too much loitering about the place. "Can’t have ye touching things.”

A note on the set-up of the show. It took place in the foyer of the theatre, where tables had been positioned to allow for distancing. There were about 45 people present. Despite the distancing we were asked to wear masks. The set-up does not favour solo giggers. I was brought to a stool by the side of the stage, where my view was partially obstructed by a speaker. Thankfully there were some no-shows (the concert was sold out) so after a few songs I moved to a table with better view.

The Hawk’s Well Theatre representative mentioned that they are hoping to put on more shows as soon as they know what the new guidelines are going to be. It is clear that audiences are willing to adhere to whatever is required if it means they can enjoy live music again. 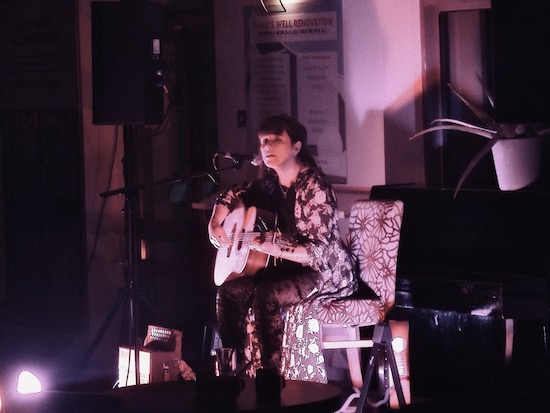