“This may well be our only gig for the rest of the year”, Lankum stated when promoting their one off show at the Abbey Theatre. The Dublin band put on ‘A National Disgrace’, which was live streamed to a worldwide audience via the Dice platform on Saturday night, and available to watch for 24 hours afterwards - thankfully, as a show this special warrants repeat viewing.

The title ‘A National Disgrace’ refers back to an event in 1926. Sean O'Casey's play ‘The Plough and the Stars’ premiered at the Abbey Theatre. It was a controversial play and caused the audience to start a riot, as they were displeased with the subject matter and bad language. As this riot was happening, W.B. Yeats took to the stage and shouted at the audience, “You have disgraced yourselves once again”. The evening became known as A National Disgrace.

2020 started well for Lankum with two sold out shows at Vicar Street. Their third album ‘The Livelong Day’ won the Choice Music Prize, the Irish equivalent of the Mercury Award. At the time of the award ceremony the band were over in the U.S., touring the East Coast and recording a Tiny Desk Concert . Then Covid 19 happened and they had to use their prize money to get themselves back to Ireland before everything shut down.

They re-emerged in June with a wonderful performance filmed in Kilkenny Castle, as part of the Courage live stream series curated by Other Voices. During that gig the band announced that they were going to do a concert in the Abbey. Social media posts in the run up to the show revealed that this was not going to be just another gig. The band posed with a script in hand, and involved a production company to help them get their vision onto the screen. This would be, as per the press release, “a gradual descent into a warped dreamworld of musical performance, theatre, winding passages, doorways, drones and existential uncertainty”.

This was my third Dice live stream and they have all been top quality. First Nick Cave’s amazing solo performance from Alexandra Palace, and then Frank Turner & the Sleeping Souls reuniting in Oxford for their ‘Show #2500’. In less than six months we have gone from singer/songwriters filming themselves on their phones and sending that out on Facebook to fully fledged performances with perfect sound and cinematic visuals.

Even the waiting time was intriguing. A glorious drone, that gradually got louder. Next we are in a taxi which drops us at the Abbey Theatre. The driver is the father of band members Ian and Daragh Lynch, a taxi driver in real life. A strange crowd of masked musicians are busking on the pavement outside the theatre, and an usher beckons us to enter.

We are led through the foyer and alleyways of this historical theatre. We hear an opera singer in the background while we enter the auditorium and the curtain goes up. The concert is divided into two halves. The parts are presented as continuous pieces of music, with each song segueing into the next, thus avoiding the deafening silences which I am sure Nick Cave left in his show on purpose, but which had seemed a little awkward on other live streams without applause.

The setlist is perfect. Staples ‘Cold Old Fire’ and ‘The Old Man From Over The Sea’ are dropped to allow for an atmospheric set, with songs from each of their three studio albums. As all Lankum's pieces are long there is time for nine songs in total. The first half has two songs from the debut album. ‘Lullaby’ is particularly impressive and fits in well stylistically with the more recent material.

‘The Young People’, their bittersweet song about suicide, features guest musicians on drums, keys and trumpet. In between the songs there are voice-overs: Accented voices from older trad musicians, describing particular styles and complaining about their compositions being performed differently from the way they intended. The latter comes just before Lankum’s unique take on ‘The Pride of Petravore’. I did not know this song, but have checked out versions by Dé Danann and Dervish’s Cathy Jordan, and although the melody is the same, the interpretation could not be more different. How did they even come up with it?! I love Uinseann De Búrca’s description of it on Twitter: “the one that sounded like a fuckin Vaudeville steampunk circus elephant march to the tune of Éileen Óg”.

Those short spoken word fragments are also a feature of Ian Lynch’s remarkable radio show, ‘Fire Draw Near’, which airs monthly on Dublin Digital Radio and which I highly recommend. It is unlike anything else you hear on radio; field recordings, whacky trad, furiously-paced instrumentals - lots of fun.

The curtain comes down for the end of part one, and we are off around the theatre again. In one room we see a bizarre band wearing face masks; next it is the Mary Wallopers and in yet another area a sewing machine is pumping out industrial noise. It is all gloriously surreal.

More drone leads us into part two, where we get a sequence of songs featuring Radie Peat on vocals. Radie recently received elaborate praise from none other than Shirley Collins and deservedly so. First she takes the lead on ‘The Wild Rover’. I have recommended Lankum to many continental friends whose only notion of an Irish trad band is the Dubliners, and who were taken aback by something so different. This version of ‘The Wild Rover’ will hardly remedy that, but I love it, especially the heavy part at the end when the big accordion comes in and the guys start stomping their feet.

Next are two of the bands’ own compositions, ‘Hunting The Wren’ and ‘The Granite Gaze’. As I sit here typing this I find myself wishing the concert would be released as a live album. The arrangements were just so good, and different from their recorded counterparts. It all looked really pretty too; sepia coloured with just the right amount of light.

The next segue features a beautiful high-pitched female vocal, which initially reminds me of Tibetan singer Yungchen Lhamo. It is the start of ‘Katie Cruel’, a traditional ballad most famously sung by Karen Dalton. The backing singer turns out to be Katie Kim. This brings back memories of a fantastic one of show that Radie Peat and Katie Kim once did, which I still hope they will revisit someday. I have seen Katie Kim on stage at the Abbey before, when she was with the Waterboys as part of their Mr Yeats project. Katie is a wonderful singer in her own right. Check out her Bandcamp site .

The final song puts the spotlight on fiddle player Cormac Mac Diarmada. ‘Bear Creek’ is an uplifting Appalachian tune. We are back to just the four band members now, showcasing their superb instrumental skills. I cannot help thinking back of hearing this at the Vicar Street concerts, where every time the chorus came around joyful cheers erupted from the crowd. We live in hope that such occasions will return, but while we wait it is a real treat to be able to watch unique live streams like this one.

Once the curtain falls we are led to other parts of the theatre, where we meet further colourful characters, including Kneecap bashing out some banging techno. We get to see Lankum and their guests again at a backstage singalong before being led back to the door we came in, leaving wonderland.

Massive thanks to all involved! 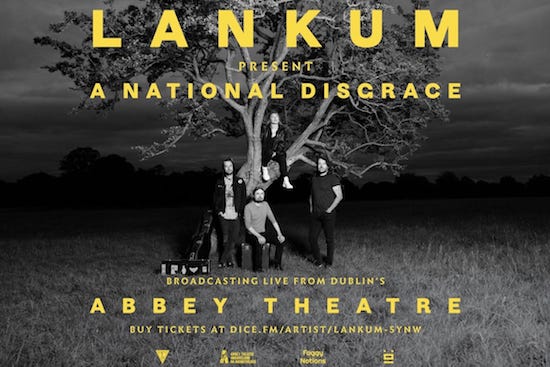