“We're the guinea pigs for a new format”, says Steve Wickham, best known as the long-time fiddle player of the Waterboys. No Crows is his other band, and on 11 July this band played a concert at Windmill Lane.

Windmill Lane is best known for the fact that U2 recorded many albums there. This was at their old location in the Dublin Docklands, long a pilgrimage site for visiting U2 fans. I remember going there and writing on the heavily graffitied wall on my first visit to Ireland. That building is no longer there, and the current Windmill Lane studios are in Ringsend, and they had in fact launched a visitor experience for the public, not long before Covid appeared.

As for live music during lockdown, in the future perhaps we will look back upon early Covid livestreams as charmingly shambolic affairs: A musician would play a living room show, and stream this via social media. Only if there was another musician in the same household might you get two people playing together. These gigs were all free, donation-based. I watched many of them, as I am a folk fan and that music lends itself particularly well to stripped down performance.

We have moved on and it is now possible for a band to reconvene somewhere and play together, with a proper crew overseeing proceedings. No Crows were invited by the Seamus Ennis Arts Centre and the Hawk's Well Theatre to play a concert, which would go out live to an audience that had paid for their tickets and received an admission link. In addition to watching the show, audience members could zoom in and be visible to other viewers and to the band. The band were seated in a circle and on a big screen behind them the audience was displayed, sitting in their respective living rooms, watching and applauding.

No Crows are best described as a fusion band. Band members come from traditional, classical, jazz and rock backgrounds. The band formed in 2005 in Sligo, where they had been playing in a pub session together. Initially a quartet, the band is now a six piece. Two band members, Eddie Lee and Ray Coen, are from Sligo. Steve Wickham is originally from Dublin and the remaining band members are from Switzerland (Anna Houston), Mallorca (Felip Carbonell) and Russia (Oleg Ponomarev). No Crows' music is mostly instrumental, however they always include a number of songs into their set. All band members write and contribute towards the repertoire.

Steve Wickham's voice and looks bring Tom Waits to mind, and Steve's song 'I'm A Fearful Man' was one of the highlights for me. I am a lifelong Waterboys fan and I always wish that Steve would get more of a chance to shine when playing with the Waterboys. What he gets to play with them is always amazing, but I wished there was more of it. With No Crows he gets that chance. The interplay between Steve's fiddle and Oleg's violin is pure magic, precisely because their styles are so different. You have to think of the Gloaming, who have similar magic going on with Martin Hayes and Caoimhín Ó Raghallaigh. Four outstanding fiddle players contained in just two Irish bands!

I found that as the concert progressed and the music got more and more electrifying, I started to miss the presence of an audience more. We were visible on the screen and the band could see us applaud them (albeit with a considerable time delay), but it is not the same as having a live audience. It's a good thing No Crows are a big band, because at least the band members could play off each other. The music they played warranted whooping and hollering and standing ovations though, rather than a polite clap and a wave.

The sound was absolutely superb and the band acknowledged the video and sound team that had made it all work. The concert lasted an hour and a half and really did the job in reminding me what an outstanding band No Crows are. They have released six CDs which are available from their website www.nocrows.net.

It seems that the “payable livestreamed concert from a proper venue” will be with us for a while. The team that brought us No Crows are hosting Muireann Nic Ambhlaoibh, again at Windmill Lane, on 25 July. 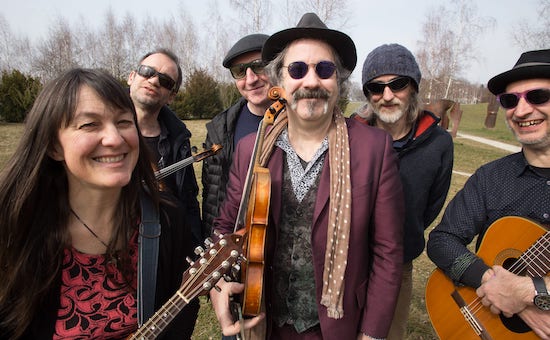 Other upcoming online concerts include: