A lot has already been written about the changes concerning Sleater-Kinney post the launch of their most recent album 'The Center Won't Hold'. It's sufficient to say that the two founding members, principle songwriters and vocalists Corin Tucker and Carrie Brownstein are still in the band, and that bands which are afraid to evolve and embrace change often stagnate and finish which is clearly something Sleater-Kinney were not prepared to do.

The stage is dark except for vertical light tubes placed around the stage and the mic stands. The set opens with the title track of the new album ; as the light tubes flash red and white the sound of Corin Tucker hitting an electric cowbell resembles an anvil being struck in a blacksmith's workshop, the mid-point of the song is whispered which sets you up for the gut-punch to the senses as the guitars and lights explode in a ferocity which is to be characteristic of the rest of the evening.

Their song about teenage suicide 'Jumpers' ,“My falling shape will draw a line/Between the blue of sea and sky ... Four seconds is the longest wait.” gets the first big audience reaction of the night. 'What's Mine Is Yours' features the closest we get to a guitar solo through Carrie's awkward, angular, jarring guitar playing and 'Ironclad' is a blitz of guitars from Corin, Katie and Carrie high-kicking her route around the stage.

As an intro to 'No Cities to Love' Carrie says “We were in another city last night ..and its great to be in a rowdy city tonight”. Corin has a charming story concerning a Manchester hotel employee refusing her tip ,“ I felt like such a crude American... who has to monetise every act of kindness” including a passable Northern English accent which causes Carrie to announce “Corin will be attempting other accents later in the show” causing laughter on the stage. Judging by the grins, shared smiles and laughter between Corin and Carrie it's apparent that after 25 years they still enjoy playing music together.

The main set finishes with 'Entertain' Carrie spitting out the verses “Where's the 'fuck you ' ?/ Where's the black and blue ?” and Corin adding her vocal howl to the chorus “ 1-2-3! If you wanna take a shot at me, well get in line / 1-2-3 Baby I heard all the shots and I'm fine” and ends in a bombardment of guitars and white lights.

The five track encore starts with a complete change of pace. During 'Broken' Carrie is on piano and Corin's emotional, cracking vocal helps to heighten the song's theme of women who have spoken out against sexual aggression which is particularly relevant in the week of Harvey Weinstein's guilty verdict. The sarcastic chorus of 'Modern Girl' “My whole life / Was like a picture on a sunny day” is loudly sung by the audience and there's a great, rocked-up, fun version of Laura Branigan's 'Gloria' with Corin leading the dancing and call and response with the audience.

The evening finishes with the ferocious, brutal guitar riffs of 'Dig Me Out' in a wall of white lights, Corin showing the range of her vocals from harmonic to feral howl and Carrie lying on the floor strangling notes from her guitar.

During the encore Carrie speaks about sexual equality, tolerance, diversity and inclusivity which have been consistent themes throughout Sleater-Kinney's career ; this stunning show from Sleater-Kinney proves that in the current climate these riot grrrls still have every reason to keep rioting. 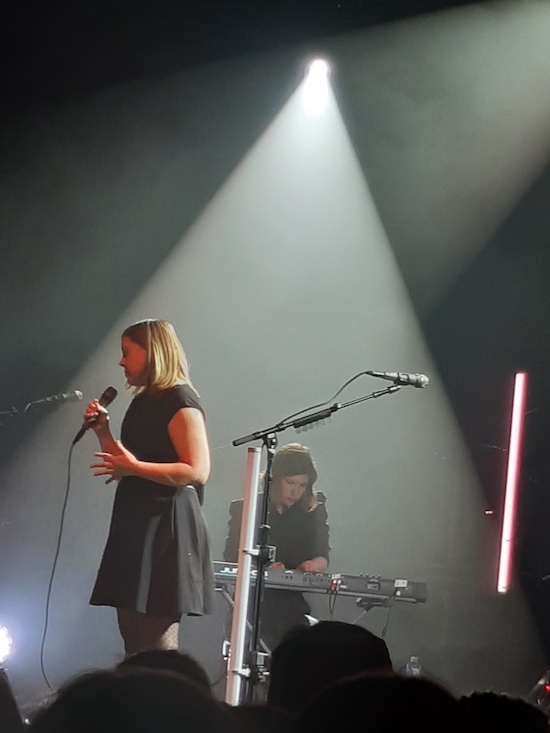