Compared with other parts of the country the wrath of Storm Ciara largely bypassed Coventry enabling the audience to get to tonight's venue without a storm-related incident, “Thanks for battling your way through the storm... I don't think its been so bad this way..we had a lovely trip down from Glasgow....though tomorrow morning we might find our van half way up a tree....” says Anna Meredith referring to the prevalent weather tonight.

Those of you familiar with Anna's work will know that whilst her musical background is predominantly classical, in this 'electric' band format her music often sets up a dancey rhythm via the variety of instruments on stage. A fine example of which is 'Sawbones' the first track on her second album FIBS (which was released last October ) and opening track tonight as the keyboards, brass and cello dance around each other in a seemingly never-ending rising note (employing the Shepherd tone I believe though please don't quote me).

To compliment the trippy rhythms there are back screen projections of various geometric shapes and patterns which swim, rise and spin throughout the show and the band are all dressed in white with angular black lines in a unique pattern for each performer.

Anna has an engaging on-stage personality and invites the theatre-style seated audience into the orchestra pit area in front of stage “ there's a lovely space down here to dance in ...lovely and warm (as the band set up a tropical beat).... palm trees” a number of the audience willing head to the space apparently undeterred by the light-hearted threat which follows “don't leave or I might have to glue your feet to the floor.”

The five piece band are touring in support of FIBS tracks from which form the bulk of the middle of the show. 'Inhale Exhale' has a more prominent dance rhythm than the recorded version set up from the drums of Sam Wilson, who also provides falsetto vocals on 'Killjoy'. Anna's music has been described in a variety of ways but whatever description fits there's certainly a great sense of joy which is evident from the audience members dancing and the smiles on the band who look like they're having a great time.

There's more evidence of musical virtuosity in the guitar-heavy 'The Vapours' which features Jack Ross performing his best Eddie Van Halen style fretboard tapping and the beautiful cello playing of Maddie Cutter during 'moonmoons'. Anna herself contributes in a multitude of ways, through keyboards, programmed sounds, clarinet, percussion, merchandising opportunity announcements “ we have stickers, put them on your fridge, your cat, or your cat's fridge” and random freestyle dancing all adding to the joyous feel of the show.

The mood of the evening is typified by the cover version medley encore which consists of Daniel Bedingfield's 'Gotta Get Thru This', Carly Rae Jepsen's 'Call Me Maybe', and we're unlikely to forget Anna and Maddie's ABBA choreography during 'Lay All Your Love On Me'. A joyful evening of music to move your head, heart and feet without the aid of a storm-force wind. 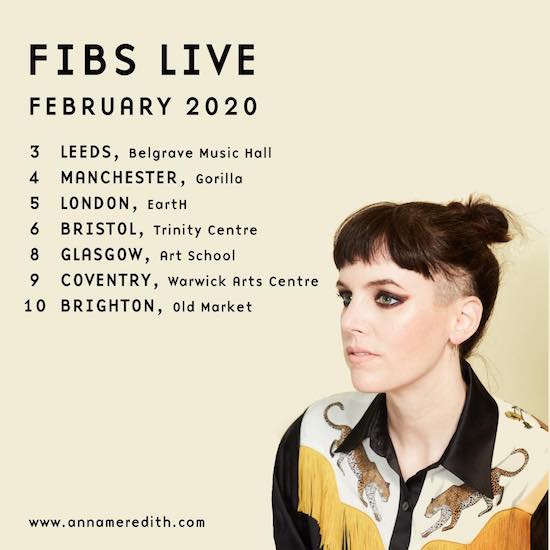