An experimental event, as part of 'Independent Venues Week' curated by Sam Duckworth (aka Get Cape Wear Cape Fly) Effectively a two day mini-festival under the guise of a fake wedding, ie: Saturday “come in wedding gear”, ready for the party with DJs til 1.00 a.m.; Sunday – “the morning after” all the guests invited for a chill-out day. Venue was The Half Moon, Putney - a long standing supporter of live music, and as promised, the weekend delivered an interesting range of acts.

So at the wedding party we were treated to :

Blab – in the Bas Jan (Serafina Steer) mould. Amusing and personal lyrics with a homespun feel like “are you still working in insurance?”. Finished with a song with edgier guitar about ‘how I murdered my ex-boyfriend “. Wearing dayglo green trousers she told us “ tonight I’ve come dressed as a highlighter “

Heavy Highness - five piece guitars with keyboard. A touch of White Denim in the guitar sound but with harmonies the Beach Boys would have been proud of. The greatest whopping was reserved for the keyboard player (Henry) who had two solos of Wakeman-esque proportions

Eat The Evidence - Madness for 2020. Absolutely not taking themselves too seriously. A ska vibe with King Blues throw in and a rich vein of comedy

Get Cape Wear Cape Fly – superb set from Sam, supported by a band of eight. Songs old and new, though mostly old. This was a devoted crowd, singing along to every note and immersing themselves in the richness the band brought to complement Sam’s faultless vocal.

The evening then went into ‘wedding party’ mode with a Disco Ceilidh – which saw the ‘guests’ partaking in traditional country dancing but to disco tunes performed by a live band. So there we were, desperately trying to keep our balance on the beer soaked floor as we stripped the willow to ‘I Feel Love’. Marvellous fun.

Charlotte Carpenter – from Leicester, wonderful vocal and acoustic guitar. Varied songs, incl a self-penned James Bond theme and another personal and poignant song ‘Follow You Down’ touching on the inevitability that one grandparent will at some stage leave the other behind.

Christopher Bliss - simply hilarious. “My name is Christopher - no relation “ and “I’m recently becoming quite famous.... amongst my family ...... and friend”. These lines were typical of his straightforward comic style. Most of the performance was centred around the narration of his film which was actually a series of hand-drawn slides with Sam plus Callum on drums & Jay (keys) playing an improvised soundtrack.

Brigitte Aphrodite - Poet from Margate. First poem set in her hometown. Gave us some real food for thought about the help that people need who are not neuro-typical

Get Cape Wear Cape Fly – brought the curtain down on proceedings with a solo acoustic rendition of his first album, now 15 years old ‘Chronicles Of A Bohemian Teenager’. Seated today, the crowd listened in rapt silence barring the moments when Sam invited us to sing along. A contrast to the previous days more raucous set, and perfectly fitting for a late Sunday afternoon.

I suspect all the hard work (by Sam himself, all the other artistes, and the venue) wouldn’t have yielded much of a financial return but, true to Sam’s ethos, this wasn’t what it was about. Charlotte Carpenter summed it up by saying it was an honour and a privilege to play here alongside so many of Sam’s friends. And certainly the loyal crowd repaid that with love and respect through the whole weekend. 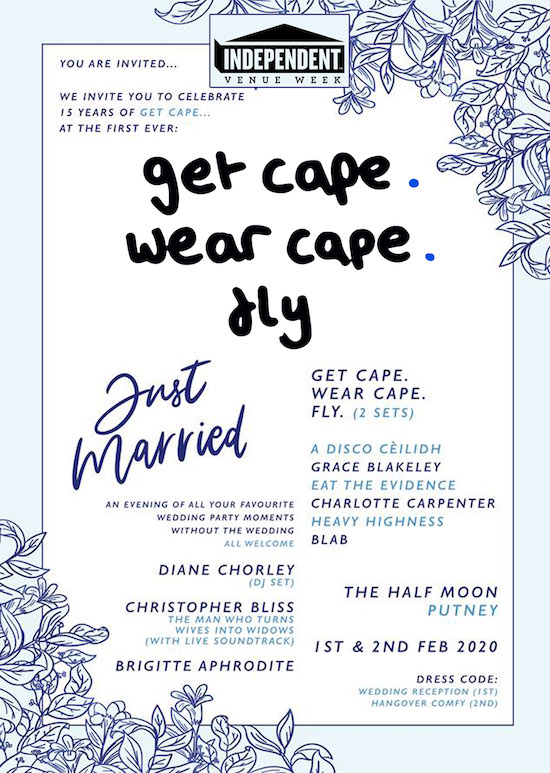