Music Network is an Arts Council funded organisation who, amongst other things, organise tours of live music throughout Ireland. These tours can involve either traditional, contemporary or classical musicians and most significantly the network bring these shows to small theatres all around the country. Sometimes they bring over acts who have a show ready to go (De Temps Antan and Rhiannon Giddens & Francesco Turrisi are recent examples), but at other times they put a number of musicians together and ask them to develop a programme.

For their first tour of 2020, Music Network presented Anxo Lorenzo, Jim Murray, Dónal O'Connor and Jack Talty. I was familiar with Anxo and Jim. I later realised that I had come across Dónal and Jack previously as well. Whether it was their names or the excellent reputation of these collaborative tours – the guys played to a full house in the Sugar Club on the first night of their 14 day stint.

Anxo Lorenzo is a Galician piper who I once saw with his band at Cambridge Folk Festival. It is a well-known fact that Irish trad and Galician music go very well together (think Lúnasa, Carlos Nuñez), so to hear Anxo collaborate with the three Irish guys was an exciting prospect.

Jim Murray is best known as Sharon Shannon's right hand man. I have followed Sharon since her days with the Waterboys. When Sharon started her solo career, she worked with a number of guitar players (Steve Cooney, Donogh Hennessy), before settling on Jim, who has been in her band since 1999. I particularly remember a spectacular concert in Galway, when the ever-changing line up of Sharon's quartet had Jim plus Frankie Gavin and Michael McGoldrick. I am also a fan of Jim's work with Seamus Begley (check out their duo albums 'Ragairne' and 'Éirí Go Lá').

Fiddle player Dónal O'Connor is a member of Ulaid with John McSherry. Ulaid are known for their collaboration with Duke Special. Dónal is the son of musicians Gerry O'Connor and Eithne Ní Uallacháin. I only recently discovered Eithne's extraordinary singing through an article in Songlines Magazine. It was Dónal who completed and produced 'Bilingua', Eithne's stunning album that was released posthumously in 2015.

About concertina player Jack Talty I learnt that he is a member of Ensemble Ériu, he has released an album with Cormac Begley ('Na Fir Bolg'), he is the founder of record label Raelach Records and a nephew of the legendary Noel Hill, who was his teacher when he started out playing.

Any readers still with me must surely like their trad, and naturally the combined talents of these four musicians guaranteed a fantastic evening of music. The show was entirely instrumental. There were ensemble pieces but also solo performances, combinations with only two instruments etc.

Anxo played two different sets of pipes as well as tin and low whistles. His tunes sounded familiar, though the only title I recognised was 'Jota do Porto do Cabo'. In between songs the guys talked about the music they were playing, and gave us often humorous stories about where the tunes came from or whom they were learnt from.

The concert also included a suite that had been specifically composed for this tour. Each of the musicians had written a piece, which they then put all together and created specific arrangements for. I cannot choose which part of the show I enjoyed the most: the often rousing full group numbers or the lovely and simple slow airs, performed solo.

The show finished with a great rendition of 'The Gold Ring' (“...all sixty-three verses of it. We'll be here a while”, as per Jack's introduction). I left the Sugar Club with a renewed enthusiasm for all things trad, which is a great place to be as the Temple Bar Tradfest is going to be on next week. 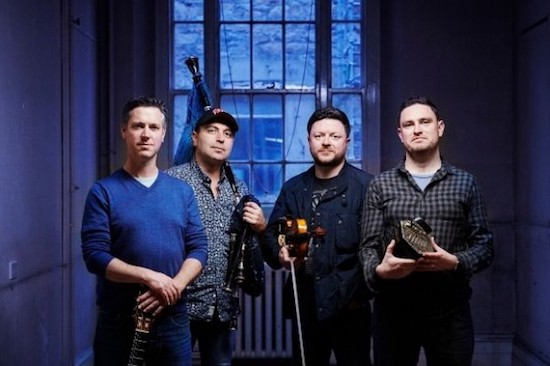