The Cornucopia tour is a theatrical companion to Bjork's Utopia album what an abundance of amazing things were on display tonight. The 2 hours at Glasgow's Hydro were such a visual and audio spectacular that it's difficult to adequately describe to do it justice.

Instead of the generic playlist prior to show-time the impressive surround sound system brings the birdsong of the rainforest to Glasgow. Eighteen members of the Icelandic Hamrahlid Choir (Bjork tells us she was a member of the choir) dressed in traditional Icelandic folk costume appear in front of the stage curtain to perform 20 minutes of Icelandic folk songs which includes their interpretation of Bjork's 'Sonnets/Unrealities XI' and 'Cosmogony'.

Bjork has described the show as a possible future where “plants, birds and humans will merge into a new mutant species” her vision is realised through the use of breathtakingly beautiful images projected onto giant screens, including a transparent curtain at the front of the stage, as human faces (often Bjork's) merge into underwater life forms, then plants and insects which grow and mutate to become almost human again. The theme continues as the various platforms on which the musicians perform are designed to resemble giant tree fungi, the various percussion instruments are set into organic shapes and the stage costumes take references from nature.

As the majority of tonight's set is from the flute heavy Utopia album, the flute septet Viibra play a big part in the show, their choreographed movements making them appear like wheat fields being blown in the wind or waves on water. After the first three tracks Bjork enters a white reverb pod to sing the a cappella track 'Show Me Forgiveness' from Medulla and 'Venus as a Boy', the projections onto the pod turns it into a living organ and the surround sound transforms her vocal to give the illusion of intimacy in an arena setting. 'Blissing Me' is one of many tracks on which harpist Katie Buckley accompanies Bjork and during 'Claimstaker' and 'Isobel' percussionist Manu Delago plays a series of gourds floating in a water bath and uses the sound of pouring water as percussion.

During a spectacular 'Body Memory' the frame of a cone descends above the platform on which Bjork stands, the base of the cone is in fact a circular flute which four members of Viibra play together. Further unique instruments are used when two giant organ pipes are lowered over the audience to produce bass notes and compliment the surround sound.

The themes of the natural world are continued during a short intermission during which Viibra play behind a projected message of the potential risk of withdrawal from the Paris Agreement (clearly targeted at the audience in the Manhattan theatre where Cornucopia was first performed). The projections of nature and human interaction continue in stunning beauty as we appear to go on a roller-coaster ride through forests of roots, groups of humanoid figures float across the screens co-ordinated with the beautiful music and vocals as the Hamrahlid Choir and Bjork sing 'Hidden Place' and 'Mouth's Cradle'. And it snows.

Bjork has described Cornucopia as “an optimistic proposal” on how we can deal with the issues of climate change it's impact of nature, between the end of the main set and the encore there is a message from Swedish environmental activist Greta Thunberg, the impact of which is heightened as it's delivered as a black and white close up in contrast to the projections used throughout the show.

In a recent Mindscape podcast Grimes spoke about the influence of technological developments on live music, “I think live music is going to be obsolete soon” primarily because people “don't actually want the real world.” Fortunately for us Bjork wasn't listening and in a similar vein to David Byrne's 'American Utopia' tour Bjork has shown that through the dazzling creativity of talented musicians and visual artists merging with state of the art technology she has created one of the most spectacular arena shows ever. Live music remains relevant and very much a part of the real world. 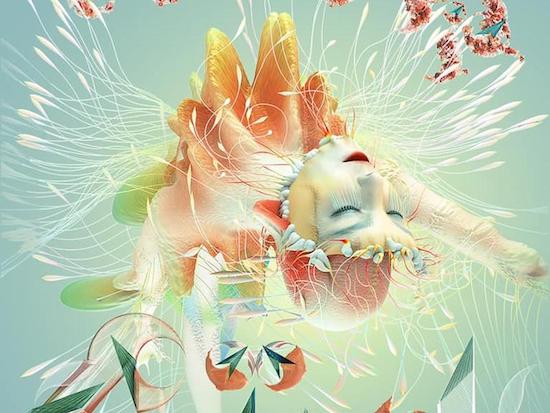