Headbanging trad on speed. That was how I described Talisk’s late night show at the main stage at Cambridge Folk Festival this summer. When the opportunity arose to go and see the trad trio at their own headline gig I jumped at the chance, and so it was that I found myself in Edinburgh’s historic centre on a very dark and wet November evening.

This was the last show in a run of mostly sold out concerts for the band. Support came from The Benedict Morris Trio, who mentioned that they were going to change their name in the new year. I recognised guitarist Pablo Lafuente, from the duo with Josie Duncan and the Tweed Project. Benedict Morris himself played fiddle and the other member of the trio was on pipes and flute. Their set consisted of sets of jigs and reels, all instrumental. The musicianship of the guys was such that it remained interesting throughout.

By the time Talisk were due to start, the small venue - standing room only - was packed to capacity. What followed was an absolute tour the force, high speed trad at its very best. Talisk are at the top of their game right now and really have to be seen to be believed.

They are Graeme Armstrong on guitar, Hayley Keenan on fiddle and concertina genius Mohsen Amini. Mohsen won musician of the year at the BBC Radio Two Folk Awards last year and that was so totally deserved. He is the most amazing musician, playing so fast that it is impossible to focus on his fingers, and your brain sometimes has trouble keeping up with what you are seeing and hearing!

Like the support, what Talisk do is instrumental sets of jigs and reels, and they do it better than anyone else today. It is an acquired tase, but if this is your thing, it is an absolute treat to undergo the Talisk live experience. Trad bands often have a particular piece that gets the audience clapping, stomping and hollering towards the end, but with Talisk the entire show is like that. The tempo hardly ever drops, and when it does, it is only to build up towards the next rollercoaster of aural attack.

While Mohsen Amini is undoubtedly the star of the band (and he is in another band, Ímar, who will be gigging in the new year), the other two musicians are equally talented. Graeme Armstrong is a master of the percussive guitar style pioneered by Steve Cooney, and Hayley Keenan’s fiddle playing is beautiful, especially when the tempo drops briefly. I bumped into Hayley in the toilet beforehand. She is a statuesque presence, and I had to look up to talk with her. It was her birthday. She told me the support act were amazing.

Talisk cannot really be compared to any trad outfit currently working, but what they share with Lúnasa is that they are so good at the instrumental material that they really do not require vocals (Lúnasa recently worked with singers for the first time; an unnecessary move in my view). And while most trad music is ten times better live than on album, Talisk are again up there with Lúnasa in that their recorded work is equally good and exciting to listen to at home.

It was hard to take a proper photo as the floorboards were reverberating for the entire gig. The audience was with the band all the way. I had a brief rave period in the 90s which I look back on fondly, and while modern dance music does nothing for me, Talisk come closest to capturing that spirit: Grin on your face, hands in the air, jumping up and down.

Despite the fact that the show must have been a significant physical workout for the band, immediately afterwards they were at the merch desk, smiling. Bands are moving with the times and take card payment these days. Edinburgh being the hilly city that it is, and the Mash House a basement venue, the card reader did not work. This gave rise to the hilarious scenario that those wanting to buy merch had to meet Mohsen outside in an alleyway so he could take their money. I came prepared with small notes, but met the very likeable maestro outside all the same to get my CD signed.

Often when you have been to an absolutely standout gig (Talisk at Cambridge, get an impression of it here ), it can be disappointing when you try to repeat the experience. With Talisk that wasn’t the case. Ten out of ten again. 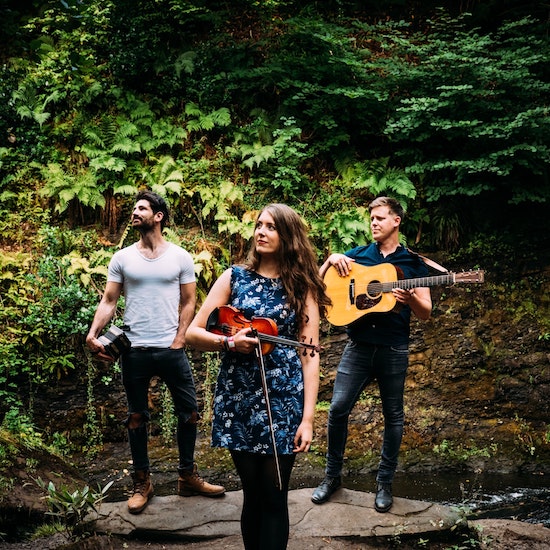