It’s a cold, dark and wet November evening in Cambridge and Kenny Wayne Shepherd is in Town. Wow, the Louisiana guitarist is in our town and an almost sold out crowd haul themselves away from their cosy living rooms for a night of smokin’ hot electric blues.

The first band to turn the Monday night into a Saturday night was The Danielle Nicole Band from Kansas. A 3-piece, Danielle is a bass guitarist with a superb voice for the blues with a smile and engaging personality to match. Current album ‘Cry No More’ formed the backbone of her 45 minute which got the audience warmed up nicely.

The Kenny Wayne Shepherd band is a 7-piece outfit of classy seasoned musicians who, really excel in their trade. Long time singer Noah Hunt, drummer Layton, bassist Troy Franklin and keyboard player Riley Osbourn are the powerhouse behind one of the most accomplished guitarists on the planet today. The horn section of trumpet and sax are ever present and glue the sound together.

We are treated to one hour and 45 minutes of the highest quality guitar playing around at the moment. The show kicks off with a deep 'look-see' at current album ‘The Traveller’ . ‘Woman Like You’ is followed by a Buffalo Springfield cover of the classic ‘Mr Soul’ then, ‘Long Time Running’ and ‘I Want You’. Not that the audience needed converting but four songs in and the crowd are enraptured in the show.

A look back to ‘Diamonds & Gold’ is followed by an Elmore James cover of ‘Talk to Me Baby’ with full audience participation. The set flows brilliantly with originals and covers. Homage to Joe Walsh on ‘Turn to Stone’ and to end a 3 song encore, there is a sensational rendition of Jimi Hendrix’s ‘Voodoo Child (Slight Return)”.

This was a band show, every member in sync with everyone else, an absolutely brilliant night of electric blues. Kenny’s guitar playing is so clean and crisp and he demonstrated a very broad range of guitar styles throughout the set.

The tour calls in at Shepherds Bush Empire tonight , Buxton on Wednesday and Birmingham on Thursday. Tickets are here . 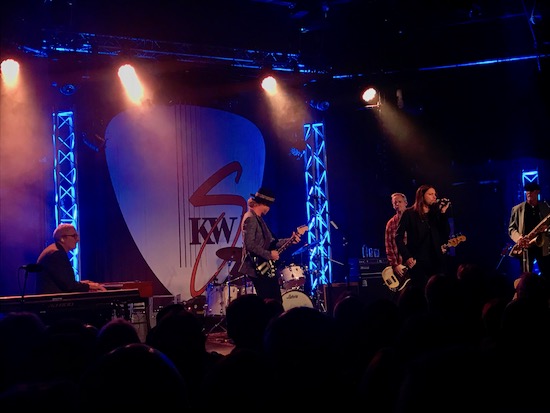