To say that Lankum’s concert on their album release day was highly anticipated would be an understatement. The band had tweeted photos of them working on ‘The Livelong Day’ in the studio (Meadow Studio, Delgany, Co.Wicklow) earlier in the year. They posted a fascinating playlist on Spotify, compiled by their producer John ‘Spud’ Murphy, of tracks that inspired the making of the album . In interviews the band had been saying that they had finally made the album that they had been trying to make for a long time.

I saw Lankum during the summer at Glastonbury, but time restraints meant that was a concise festival set. So last Friday their new music was finally going out into the world. I picked up the album en route to the gig, but had only heard the two tracks that been released early online, plus ‘Katie Cruel’, which Radie Peat has been singing for a long time and had been released on SoundCloud by side project Rue in 2016.

‘The Livelong Day’ is the band’s third album (their fourth really - check YouTube for ‘Where Did We Go Wrong’, released by Ian and Daragh Lynch as Lynched in 2004!), and their second with Rough Trade. Reviews had been unanimously positive and I really could not wait to hear what they had come up with and to experience it live.

Vicar Street was sold out and the vibe was festive. Support came from Junior Brother, a musician and singer from Co.Kerry, based in Dublin. Accompanied by two musicians Ronan (Junior Brother) delivered a strong set, in his very unique style, full of conviction. Traditional instruments (banjo, bodhran) used in a unconventional way, created a big, at times droney sound.

The previous day Vicar Street had played host to the RTE Folk Awards, and Junior Brother’s album ‘Pull The Right Rope’ had been up for Folk Album of the Year, alongside albums by Lisa O’Neill, the Gloaming and the eventual winners Ye Vagabonds. Unfortunately his album is available on vinyl and as download only - a regrettable trend (same for Thomas Bartlett & Caoimhín Ó Raghallaigh’s recent duo album). I am a “middle school” music fan who likes to buy CDs. I mentioned this to Ronan after the gig and his joking reply was that he is a hipster, hence vinyl only, but that the album could be streamed as well...

Lankum took to the stage at 21:00 and what followed was a an unbelievable hour and a half of big, droney, beautiful music that was simply stunning. It was almost like a theatre piece, meant to be taken in as a whole. They started with their amazing and totally different (to the pub song, that is) version of ‘The Wild Rover’, followed by ‘The Young People’, an original song written by Daragh. As far as I am aware this is only the second song written by Daragh released onto album. His first was ‘Cold Old Fire’. In other words, he may not be prolific, but the songs are golden. It is early days, but ‘The Young People’ may well be the standout track.

Four additional musicians contributed to some of the songs, adding brass, organ and percussion, while the Lankum members themselves switched instruments all the time as well. An early highlight was an instrumental piece, ‘Bear Creek’, led by fiddle player Cormac Dermody, which started off as a trad tune but morphed something much bigger sounding, with drone underneath.

They played a large chunk of the new album. These days I feel thankful when bands take that risk. I started gig going in the 80s, when it was the norm that musicians played what they wanted. I have been to Waterboys gigs that did not include ‘The Whole Of The Moon’; have seen Big Country who stubbornly refused to play ‘In A Big Country’. Bands played their new album, with maybe two or three hits at the end, and I was absolutely fine with that. Nowadays gig going for some is just a social media opportunity and bands cave in to the pressure to play the hits. It really annoys me; I cannot understand why people would not want to be more open minded.

In an article about the album in the Irish Times, Ian Lynch said, “You should be giving your audience what you think they need, not what they think they want.” Exactly! As it happened, the audience were totally on board. And this was not easy-on-the-ear material. ‘Hunting The Wren’ is another original song, written by Ian, about the Wrens of the Curragh. This was a community of outcast Irish women who lived on the plains of Kildare in the 19th century. They lived in shelters resembling nests. Their story was unknown to me; it is tragic yet intriguing at the same time.

Some older songs were played. ‘The Granite Gaze’ stylistically fit in very well with the new material, and they played their version of ‘Rocky Road To Dublin’, recorded for RTEs ‘Ireland’s favourite folk song’ project earlier this year.

There was notably less banter than previous times I had seen the band at Vicar Street. There was a sense of occasion about the night, and it all seemed a bit more serious. Ian actually said, “In a way it feels like our whole lives have been leading up to this gig”. In an interview a few weeks earlier I heard Radie say that she was just so keen to get the album out, in its entirety, and that she was not keen on leaking individual tracks.

The gig ended with another mad instrumental, ‘The Pride Of Petravore’. Originally a hornpipe tune, this was the most startling piece of music of all. A glorious cacophony, the melody coming from two tin whistles sellotaped together. There was brass, thunderous percussion and it descended into a fabulous noise, certainly more Beefheart or Neubauten than Dé Danann, who have also recorded this tune.

The band did not bother to leave the stage, and encored with ‘Cold Old Fire’ and ‘The Old Man From Over The Sea’, after which they received a prolonged standing ovation.

What a night. Fans took to Twitter the following day to express their appreciation: “Still processing the whole experience. Magnificient will have to do for now” (@stilpix); “Good to be alive in the times of Lankum. They have evolved to the point where they sound like no one who has gone before them” (@foggynotions); “I honestly have no idea how it could have been better”(@ThatHatGuyJack).

Lankum are touring the U.K. in November. An additional date at Dublin’s Vicar Street on 4 January still has some tickets left. 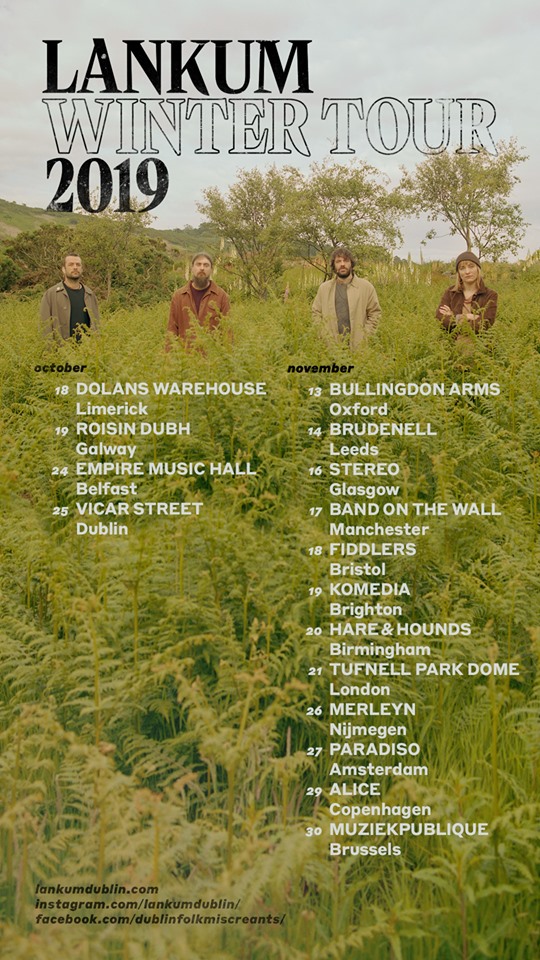