Sometimes I ask myself why we are drawn to certain types of music. Out of the many variants of African music for example, why am I drawn to desert blues whereas I find Afrobeat too jerky? And where does my fondness for throat singing come from?

I clearly remember when I first heard it. It was a Sunday morning at Roskilde Festival and I saw Yat-Kha on a stage that is no longer there called the White Stage. At the time they had a Björk-like female singer in their line up. I loved this strange music instantly. Found out it originated in Tuva in Siberia.

I have since gotten into all the types of throat singing: Tuvan, Mongolian and Tibetan throat singing, Sami joiking and the most otherworldly of all: Inuit throat singing. I have been lucky enough to travel to Mongolia, border regions of China, Kyrgyzstan, and I have seen the landscapes that match the atmosphere of this beautiful music. I have witnessed the music live too (Hanggai, Tanya Tagaq, Sainkho Namtchylak), but my attraction to the music pre-dates the travels and the knowledge.

And I had never seen the granddaddies of the genre - Tuva’s Huun Huur Tu. Back in winter they announced this concert at the Sugar Club, and almost immediately a second show went on sale. I did not give it much thought, but this was unusual enough for a not widely known world music act. When I joined the queue outside the Sugar Club last Wednesday it became clear why: The city’s entire Russian population had come down to see these veterans. The women had all dressed up for the occasion. Once inside, most people started drinking with gusto. There was no support, so there was ample time to get in the mood.

Huun Huur Tu have been going since 1992. Their line up, unchanged since 2005, consists of Kaigal-ool Khovalyg on lead vocals and mouth harp, Sayan Bapa on guitar, Radik Tyulyush on flute and Alexey Saryglar on percussion. All four men sing and play a variety of string instruments: Doshpuluur (Tuvan lute), igil (horsehead fiddle) and byzaanchi (open body, four strings, played with a bow). The instruments are beautiful and have horse's heads at the neck. The men come on stage dressed in traditional costumes. Sayan Bapa takes care of the introductions and explanations. He is a man of few words: “The next song is about a horse”.

The songs makes you think of vast open spaces and an older world. Many pieces have the rhythm of galloping horses; we hear bird-like noises. When all four members sing together they create a big and powerful sound. The flute player plays with his mouth open and produces a beautiful panflute-like sound. The horsehead fiddle is a melancholy-souding instrument and with the mouth harp they create a twangy sound. It is all magical.

There was an interval and I had a look at the merch desk, hoping to expand my throat singing collection. These kind of CDs can be hard enough to find. The band had brought a good selection, some vinyl as well, but prices were steep.

The second half of the show was even more impressive and I found myself wishing I could have a recording of this magnificent concert. The sound in the Sugar Club was excellent, and for all the alcohol consumption the audience were really quiet and attentive. It was ideal. Huun Huur Tu received a standing ovation, and followed this with an encore.

If you ever get the opportunity to see this band in concert, do go! 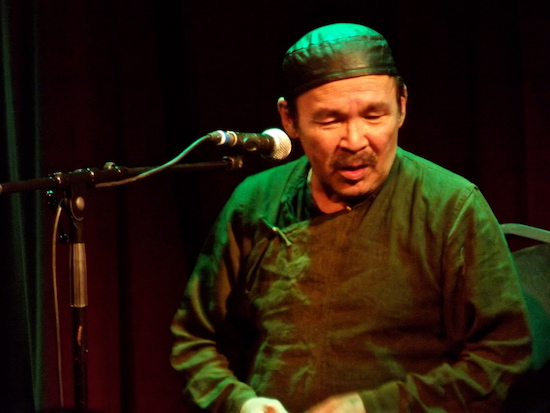