In January 2018, the world was left with a Mark E Smith sized hole to fill with the sad passing of the iconic front man of The Fall. At the time of his passing, The Fall had been enjoying their most stable and longest serving line up, with members Dave Spurr, Kieron Melling and Pete Greenway having done over a decade with the mercurial frontman. So what to do next ? Recruit a new vocalist, record a debut album and get out onto the road...that’s what.

Named obviously after a Fall album, the remaining members recruited Sam Curran formerly of the band Black Pudding, and he has become writer, vocalist and frontman – not just a Smith replacement, and no shrinking violet either. In workmanlike shirt and jeans, and face partially hidden by hair, he bids the approximately two - thirds full Brudenell to “come and stand down here (nearer the stage), you’ve f***in paid to see us haven’t you ?”

We did as we were told, shuffled forward and they blasted off with a song called The Art of Projection. Presumably, most of tonight’s unnamed songs will be found on their upcoming debut album 'Gastwek Saboteurs', due for release in May.

From the first half an hour, the songs have a harder, more dynamic thrusting edge than the Fall’s later output, but this was going down well with the inevitable gathering of Fall fans in the audience.

The stage was dominated by the hard as nails presence of Dave Spurr – built like a brick outhouse, neck of the bass guitar at 45 degrees and unmoving like a solid old oak tree, roots firmly planted. Curran himself however was giving his best, with guitar hitched up and howling into the mike indiscernible lyrics and screams. Greenway is the melody section of the band, often contorted and twisted around his guitar, which he makes sing at will.

When he stepped up to the mike and announced “we’re now going to play our hit single”, the crowd were their most animated of the night as No Man’s Land is the only song released at the moment, and it’s a pounding, kinetic belter.

The set ended with a couple of Fall covers – Senior Twilight Stock Replacer from Imperial Wax Solvent (a nice touch), and Auto Chip 14-15 from 2015’s Sub-Lingual Tablet, presumably because they only have a handful of their own songs and as an homage to their past.

Excellent night, from a band who are clearly comfortable with each other, and have found an edgy, bellowing replacement for Smith. Whilst obviously and inevitably leaning on the past, this band is no Fall tribute act. From what I heard tonight, and hopefully be confirmed in May when the album drops, this is a band keen to develop their sound and move forward, perhaps now, more on their own terms than ever before. 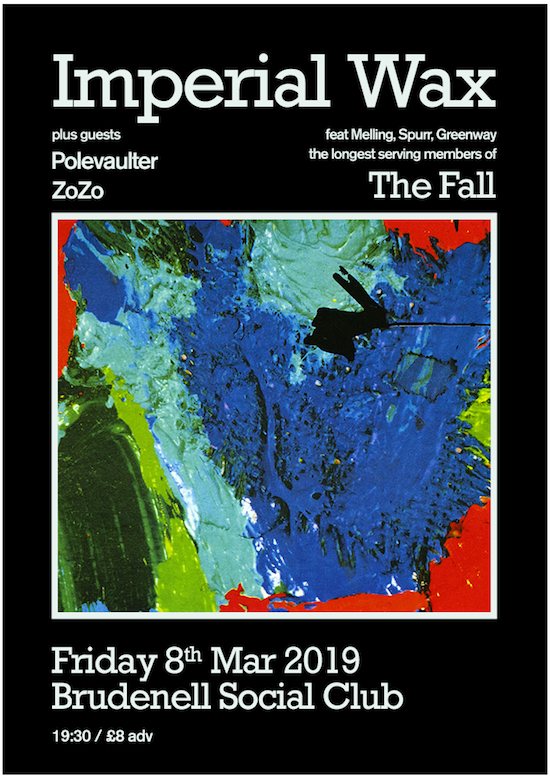