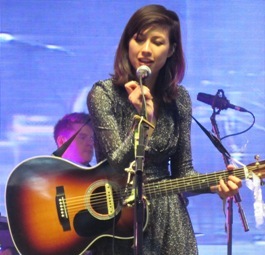 Hi Emmy. How the devil are you today?
Soooo tired today. How are you?
How was your Glastonbury experience last weekend and how did the Tim Wheeler Pixies cover come about?
It was epic, as always! The cover was something Euan and I had done in the past, and when Tim did his Pixies cover set for JD sessions, he asked us to come and do ‘where is my mind’ with him. Now it's something we do together because it's in our repertoire. I really wanted Tim to come to Glastonbury this year and since he was there it seemed cool that he would come on stage with us.
I am sure the last time I saw you, you were solo at the Latitude festival prior to the release of the first album. Second album done and with a very substantial band( judging by Glasto,) playing alongside you, how is your musical life right now?
It's pretty varied at the moment. I play solo acoustic, or with just me and Euan, and then we go on tour with our big band, and then at bigger dates still we add two backing singers. I also have a side project with Elizabeth from Summer Camp where it's just the two of us and we sing without guitars. And yesterday Tim and I played a show at the Willowstone Festival in Northern Ireland and that was a different experience again. I got to play guitar on Shining Light. As you can imagine it was a pretty awesome experience.
There is a massive amount of competition out there for singer-songwriters, what can you do to get your album at the top of peoples shopping list and is there anything you would like to tell the wide world about your new record, that they may not already know?
I don't mind that there's a lot of singer songwriters out there - there's enough room for everyone in the world to be making music...but I guess if I had to find something that distinguishes me from other people it would be my extraordinary capacity to act like a teen on her first period.
How do you personally tackle the art of song writing?
I write down little notes and make records of melody ideas, and I take photos and collect images. Then when I sit down to write I gather these things together and the ones that fit together turn into songs. It's like filing. I'm basically a secretary.
Are you a fan of the social networking phenomenon for music promotion or, do you think it has a limited shelf life?
I am an avid Twitterer. Sometimes I annoy myself but it is good for promotion and I have some really good friends on there. I like writing in single sentences as well, it makes me sound pithy. And you really can't live in the 21st century and not follow Jedward on Twitter. Having said that I just got in trouble with someone for not replying to him on my personal Facebook, when I didn't even know you were supposed to check those messages, and I literally have no idea how I know him. Sometimes all the different forms of the communication zap the life out of your actual, day-to-day relationships.
I won’t ask your musical influences but, if you were forced onto stage in a bands T-shirt, which band or artist would that be?
I have a very loved and very old Pixies t-shir and Nirvana. Can't go wrong with a Nirvana t-shirt. I used to have an amazing B-52's t-shirt from Austin but I gave it to someone who I'm not in contact with anymore. My Pixies t-shirt also got sent to LA when I lent it to a boy. I had to go there to get it back.
One,from the Ladies; You looked serene at Glasto, where did you get that dress?
So obviously from you! It's one of my best friend's dresses. Her name is Jazz Domino Holly and she's a writer who writes about crafts and feminism. She's very stylish and she literally styled me for Glastonbury. I wore a t-shirt that she hand tie-dyed for one of her columns in Company magazine. Her book is out in the Autumn - check it out:
The art work of your two albums couldn't be more different. How do you go about choosing the artwork for an album?
I worked with an artist, Anna Pesquidos, on the first one, and a photographer, Alex Lake on the second. It's all about what you come up with, with the person who you've chosen to work with. Alex is mind-blowingly talented so I gave him some initial thoughts but left the big decisions up to his massive mind.
What do you most prefer, being in the studio, playing at a festival or, an indoor concert venue?
I like all those things at different points in the album process. I'd love to start making a new record right now and skip all the touring but I think the touring is something you have to do to become a better musician and move forward with the next release. 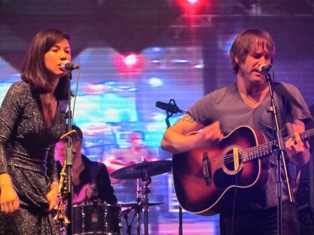