A Q&A with Jessica Clemmons of Jess & the Bandits

With new album ''Smoke and Mirrors'  due for a September release and tour dates on the horizon, we caught up with lead singer Jess Clemmons;

New album 'Smoke & Mirrors’ done and dusted, how was the recording process different this time around?

We actually did quite a bit in London this time as opposed to before but the process in Nashville was about the same. Record all of the instrumentation in about 4 days and then spend another 3 days on vocals.

Anything in the title of the album we should be aware of? ... Is there a theme to the album?

Honestly, the minute I wrote this song with Ben Adams (A1) and Shelly Poole (Alisha's Attic, Red Sky July) I knew I wanted this to be the title of the new album. This was one of the first songs written for the album so I didn’t really know what the theme would be yet. This song is about feeling like you’re not living the life you should and ever day is just putting on an act, smoke and mirrors. I also equate this to the music industry. There is a lot of that in this world. People think it’s so glamorous... and it has it’s moments but sometimes what you see is not always what you get.

How is life in a band in 2017 .. Would you recommend it as a career step for budding musicians still in college today?

Yes, 100%. It can be tough at times but it’s that way with anyone you spend a lot of time with. It’s like a family. You fight, you laugh, you fight again and then you laugh about it. The important thing is making sure you’re all in it together, as a team. I also think it’s a lot easier to promote a band instead of a solo act. Bands just tend to feel a bit more exciting.

Do you consider yourselves as a ‘Country’ band or do you avoid a categorization?

I would say we are hanging out under the umbrella of the country genre but would never want to box ourselves in. That’s the fun of music, making something new. Country music in terms of the melodies and storytelling is where I’m at home but rock and even gospel is where I come alive on stage. There is definitely room to include that in country music. It certainly wouldn’t be the first time.

Are there any songs on the new album that are particularly close to your heart?

There are a few but Already Written and The Bullet are the closest. Already Written was written last summer with Ben and Shelly before I met my fiancé. I was just writing a song about the person I hoped to meet one day. The Bullet is about finally meeting “The One” and how you let your walls down to fall in love with someone.

You recently played the 'Buckle & Boots' festival near Stockport, how was that?

It was a lot of fun! It was our first time out in a long time so a bit nerve-wracking to sing the new songs for the first time, but to our surprise, people were singing along!

What is your key to remaining sane on tour?

Who said I was sane to begin with?! Haha! Honestly I think that’s the time I don’t worry about it. I just let go and enjoy every second of it. Being on tour is the big payoff to all of the work in the studio and writing rooms for months and months.

What was the first record you brought and where did you buy it?

The first album I personally bought myself was a Garth Brooks box set. I bought it at a CD store that has, of course, gone belly up.

What is your passionate interest outside of music?

I’ve really gotten into cooking lately but I LOVE to bake and decorate cakes.

Is there one particular band or artist you would love to tour with?

Lady Antebellum would be so much fun to tour with. They have fantastic songs and I think it would be a great match!

How did the Bandits get together and what is the hardest thing about leading a band?

Most of us met years ago when I was doing the solo pop stuff and touring with a group called The Overtones. The guys were their backing band. We got on so well and when it was time for me to start making the switch to country and do my first outing as Jessica Clemmons, the country singer from Texas, I knew I wanted them to be my band. From then it naturally developed into a band and Jess and the Bandits were formed. I think the hardest thing about leading a band is finding the balance between work and fun, friendship and co-workers and all of the things in between. 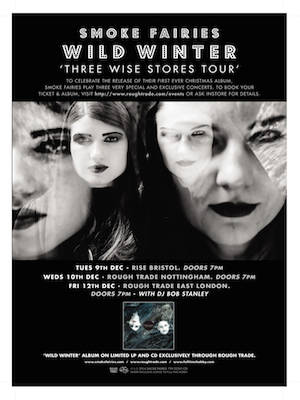 New album Smoke and Mirrors is due for release on 15th September and the band are on tour as well;