Q&A with Peter Coyne of The Godfathers

Hi Pete, how was the UK tour?

It was a really great tour of the UK this February - 6 blinding concerts in Middlesbrough, Birmingham, London, Newcastle, Glasgow & Hebden Bridge. The audiences at each gig seemed to really love it & we had a blast too! That's what it's all about...

What’s the feeling like having a new album on the shelves again?

Fantastic, wunderbar! I really think 'A Big Bad Beautiful Noise' is definitely the best album The Godfathers have ever made & we are all so very pleased with it & the amazing reviews & reaction we've been getting to it from all around the world. It's a KILLER album - do yourself a massive favour & check it out. We did here's our review

How did the current band come together?

Guitarists Mauro Venegas & Steve Crittall & drummer Tim James were actually 'recruited' via a post on Facebook! We had lots of auditions/rehearsals in London & it was quite obvious that they were serious players & personalities & asked to join (which of course they did) & Darren Birch on bass knew Tim from playing in bands together in Birmingham. Together we make an unholy funk, a bitches brew & quite literally a big bad beautiful noise. This is a seriously wicked line-up of the band as anybody who has seen us live recently or heard our new album would testify - probably the best it has ever sounded. So all good or onwards & upwards as we say in The Godfathers.

Do you think your sound has changed over the years, and how was the recording experience in the studio putting the album together?

Of course it has changed over the years & that's how it should be, you can always make it bigger, badder & more beautiful than before. Each album is a new, sonic adventure. We wrote what we thought were some great numbers, rehearsed & played most of the songs live & so when we went into record it was then a case of capturing the right performances from everybody & the band as a whole.

We recorded most of the material for a week, then took two weeks off to reflect on what we'd done & write some more & then spent another week finishing it all off. So 2 weeks in total which was a relatively fast recording process compared to some other bands & that kept the whole thing fresh for us too.

Recording was mainly a lot of fun this time, with the odd bit of ball ache thrown in to keep us all on our toes. I really enjoyed making 'A Big Bad Beautiful Noise' & I'm so pleased & proud of the sound we achieved & how it all turned out.

Why did you choose rock n’ roll for a career?

I've been in love with music since I was about 5 years old so I guess you could say being in a band is a natural progression to that.

They can certainly expect to hear some really brilliant rock & roll music from a group that gives absolutely everything on stage. The best numbers from our new album & what we consider the best stuff from the vaults of The Godfathers. We hope that people in the audience leave wasted, exhausted & entirely happy with our live experience & judging from the reactions we've been getting all round the world in the last few years that very definitely seems to be the case.

Roxy Music's 'For Your Pleasure' album in 1973 from a record store in south London. Early Roxy Music were literally out of this world to me at that time, like they'd beamed in from another planet - exotic, sinister, great songs like 'Do The Strand' & 'In Every Dream Home A Heartache'. That album still sounds really great today, very forward sounding & even anticipating some of the punk music that followed it. Don't be fooled by the MOR band that Roxy Music later became - their first 4, maybe 5 albums were absolutely brilliant.

What is one major difference for people forming a band today as against when you started out?

It's very difficult for working class people to break into music now as like in acting or other sectors of the arts there is a definite, middle to upper class mafia in charge that excludes them. That's a very unhealthy, unfair imbalance in my opinion. I doubt very much if working class bands like The Sex Pistols or Slade would be allowed to exist now & that's a real, bloody shame. There are lots of Ruperts, Tarquins, Jemimas & Sybillas in charge & they can all go f*ck themselves - their music, acting & general artistic outputs SUCK - BIG TIME!!

What are the plans for the rest of 2017 for the band, any festivals?

We plan to celebrate the recent release of 'A Big Bad Beautiful Noise' by touring all round the world to promote it. In March we play concerts in France, Belgium, Holland, Germany & Austria. Eventually & in time we will hit everywhere on planet earth! We have announced quite a few big festivals in Spain & the UK already (Azkena in Spain & Rebellion in the UK & others) & we will no doubt be adding to those festivals soon. Look out world - a big, bad, beautiful noise is coming!!

Watch the video for 'You Don't Love Me' 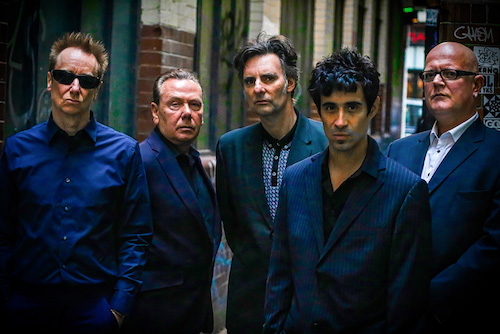