New EP ‘I welcome the Flood’, where did the title come from?

I actually had the title before I had the song or the EP. Even before I started playing solo. It's been hanging around in my phone notes since 2014. It's got a Biblical kind of feel to it. It's about wanting everything around you to be washed away.

Many of the lyrics seem to relate to dark stories. is that the case or just our interpretation?

Dark is an interesting adjective to apply. I think I agree that a lot of it comes across as dark but I'm not sure it was my intention in anything other than the title track. I tried to make them pretty to listen to initially. I think some of it's kind of funny. Possibly not 'ha ha' funny.

What was different about the new EP compared to your solo EP debut?

I tried to strip it back a little. I tried to use a bigger uh... pallette. So there's a little more percussion and odd sounds. I also tried to record everything analogue. There was some MIDI stuff on the first EP. Also, on the first EP I wrote the songs just using strummed chords and the vocals, and then I picked them apart and built up the song. With this one I built the music first and applied the words later. So I had a bunch of instrumentals that kind of worked on their own and then tried to come up with the vocals. So the melodies are a little more interesting I think. I was paying more attention to them.

How is the music scene in Brighton these days, still buzzing?

It's pretty healthy, yeah. I've only been here about six months, not too long, but there's always loads of stuff to see at any one moment. Usually some of it is really alternative and interesting, which is nice.

Is your working life that of a full-time musician or do you have other work to keep the wolves from the door?

I have a full time job and any time I'm not at work I'm doing music stuff. Although the music stuff is becoming slightly less time consuming as more people take notice of what I'm doing.

What was your favourite album of 2015 and why?

To Pimp A Butterfly by Kendrick Lamar. I've always liked artists who are brave and uncompromising. Kendrick's last record was critically acclaimed, but still fairly niche. So he was poised to have a huge mainstream breakout record. The fact that he had that, and that it was this weird, free jazz, cultural thesis thing was pretty brave and uncompromising. His lyrics are great too. There's great vision in that album.

What is your method of songwriting, real life moments, being in a particular space or mood. What is the spark that starts you writing lyrics?

A little of all the above. If a nice line hits me I'll write it into my phone. Then when I'm writing I'll draw the ones that fit together onto one bit of paper and then improvise around them. I'm not sure what the song is gonna be about until I'm singing it a lot of the time, so the space and the mood I'm in has a lot of influence on that. I'll draw on real life stuff sometimes, but largely I don't appear in the songs.

Hopes and plans for your music career in 2016?

Play everywhere all of the time. Possibly release some more music. See where it all takes me.

Ryan Adams covered Taylor’s Swift’s 1989 ... What album would you like to cover?

I have actually been thinking about this a lot lately, because I'm considering undertaking a similar project. I'd like to do something the complete opposite of what it is that I do. I'm leaning towards Sound of Silver by LCD Soundsystem.

Kylo Ren. I'm whiney and I dissapoint people one audience at a time.

'I Welcome the Flood‟ will be released on 15th February 2016 on iTunes, Amazon, Spotify, and "basically anywhere else you can think of". The CD release will be available exclusively through Adam's BandCamp page. 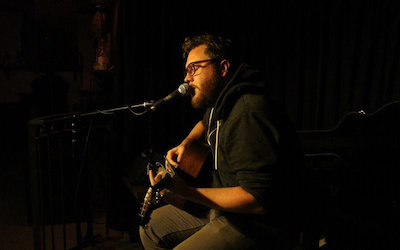