In Conversation with White Reaper at The Leadmill in Sheffield

I'm backstage at The Leadmill in Sheffield with White Reaper, who are Tony Esposito (Guitars, Lead vocals), Ryan Hater (Keys), and twin brothers Nick (Drums) and Sam Wilkerson(Bass) to have a chat before tonight's show.

This year you've released your debut album (which people should be buying) 'White Reaper Does It Again', which I bought after hearing a track on NPR's All Songs Considered podcast.

We really appreciate that , and hope you enjoy the show. It blows my mind that people this far away have even heard our music.

I hear on the album some Ramones, early Strokes, New York Dolls, Nirvana, was that the stuff you were listening to growing up in Louisville?

Yeah, basically all those bands you just mentioned. plus some punk shit. Everybody loves Nirvana,   Nevermind, is one of the first CD's your friends show you. We didn't consciously try to make album that sounded like that but it's going to happen.

Looking at your logo and the character on your band merchandise (who's the spitting image of Eddie), were you Iron Maiden fans as well?

It's a direct rip off. We liked the Iron Maiden merch, their look and Eddie so much we decided to rip it off. It's a tribute. Nobody does that stuff anymore, everyone wants to get all artsy it's a straight metal ass T-shirt. If I went to a show and saw one of those T-shirts I'd want to buy it.

Does your guy have a name?

We call him Deadie, (laughter in the room) we've never properly called him that but that's our joke.

Tell us something about the music scene in Louisville?

It's cyclical over a decade, you'll look up and there'll be 20 new bands appeared, which is kind of where we are now, but it can also die. We were born out of a lull there wasn't too much going on, there was a really big all ages scene we were part of, basically a punk scene. There was a venue called Skull Alley which was the one all ages venue in town got shut down and we were what are gonna do now? But it's back now and it's pretty good, but a lot of people move away they'll do high school band then leave, most kids want to go to a big city.

More like Chicago, it's closer and cheaper than New York. I'm not knocking that, it's kind of how the scene works, everyone wants to go to a big city.

I know My Morning Jacket are from Louisville. Are they still based there?

Yeah, they're the big band from the area. The guy that recorded us Kevin Ratterman, he has parties every now and then and everyone from My Morning Jacket are at his parties, they're just guys who hang out. They played Forecastle (a Louisville festival) with us.

Tony, you're the songwriter in the band. The last track on is album is B.T.K I've read through the lyrics and can't work out a reference to B.T.K.

Have you seen the movie Scream, at the end of the movie it's revealed that Billy's the Killer, so BTK.

And the track Wolf Trap Hotel ?

It's a real hotel.  We stayed there in Virginia and it's definitely haunted. It looks like it hasn't been touched since the seventies, its old school. We turned on the TV and it was just fuzz, definitely more than one murder has happened there.

I noticed the tour has a couple of days off. Are you planning to do anything?

We're still trying to work it but. if we have to play a basement show for free we'll do that, we just want to play. We hate having days off, we like to play all the time. Days off are just so slow. I think we're all going to get tattoos this weekend. We love getting tattoos on tour. Ryan - I think I'm going to get 'Free bird' ( the Lynyrd Skynyrd track) across my arm, they're my favourite band .

You played SXSW in Austin this year. Tell us about that.

We only played three shows, which is ridiculously low for a band playing. But it ended up being really fun for us we had a free place to stay; they gave us the keys to their house. There were so many bands we wanted to see that were playing. Not to mention you get to meet a lot of people. We played our label showcase and met a lot of people we've never met before; we met Alvvays (who White Reaper are supporting on this tour).

Are there any US based bands that people should check out?

Broncho who are from Oklahoma they're super poppy, rock and roll kind of like us. Twin Peaks who are probably the most accurate modern interpretation of The Rolling Stones, like if the Stones broke into hardcore punk every once in a while. Jawws, who are from Nashville who are one of the best bands I've seen. They're so young, so cool. We really listen to mainly old stuff. It's really hard for me to like a band until I see them live, I very rarely fall in love with a band until I've seen their live show.

For a young band like yourselves, is the prevalence of downloading and streaming a benefit?

On the one hand I love it that,... I think it's beautiful that so many young and un-noticed people can come up through the internet, but on the other hand I want to hear bands that record and tour a lot, they're really serious about being in a band. So many people come up to us, and tell us on the way to the show we listened to you on Spotify and really got excited about it and that's great , but I'd much rather you just listen to our record, the whole thing.

I think it's a great compliment, somebody told us you could illegally download our album , like wow are you serious . That means far more to me that somebody's made it available for others to listen to. To answer your question the Internet makes it easier to listen to our music, but you should definitely see us live.

Finally. You've got the rest of the UK tour with Alvvays, then what's next for you guys?

We do Canada with Alvvays, then we do the US. We going to try and record a few splits (Split 7” single) with bands we like and try to put out some new music really soon. Ideally we'll be recording some new songs back in Louisville in December or January in the same studio cos he did such a great job on the album.

The UK tour with Alvvays continues until the 11th September. Their debut album White Reaper 'Does it Again' is out now. 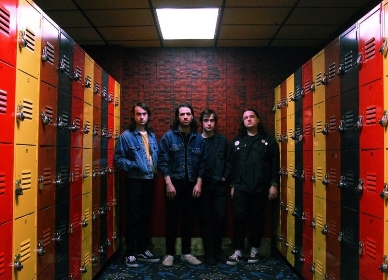