How and when did the band come together and what are your early ambitions for your album?

We formed through number of years in a series of lucky timing and coincidental circumstances with enough Kevin Bacon degrees of separation to make it happen.  That's the short story at least.

I think our early ambitions for the album are for people to hear it, spread the word and get some traction on a few different fronts.  We've never put out a real album before, let along a 13 track, full length, so this is sort of our coming out.   We want it in as many people's ears and stereos as possible, preferably at high volumes.  Not to mention trying to find some licensing/commercial deals for some of the tracks.  And now that we have something to show people, we are starting to look for a label as well.  This first album is the foundation for all of that, hopefully.

How important do you think it is for new artists in 2015 to find a label?

Good question.  I guess I wouldn't know because we don't have one... yet.  I think ultimately you need a label for sure.  Whether you create it yourself or not though, somebody is going to have to that work, and it's a LOT of work.  I don't think it's realistic or beneficial to have the band doing the artistic side and a majority of the business side as well because it takes away from both at the end of the day.  Plus, with a label, I think there’s more of a family vibe and they help immerse you into more of a community with a connection to other bands, people and places.   It takes a village…

How would you describe your songs for people that have not heard your music yet?

We have never been able to boil that down to a concise answer.   I’d say we are a blend of spices.   The main ingredient is gritty rock, with a heavy dose of soul, a handful of punk and a pinch of jazz.   The side dish would be funk and desert would be hip hop.    You combine all of that; you get a nice taste of the Benjees.

Where was your debut album 'Alright, Alright, Alright' recorded and over what period? Were the songs already complete before you went into the studio?

We recorded at Virtue and Vice Studios in Brooklyn, NY with Rocky Gallo and had a great experience with both.   But studios are expensive and like most bands, we’re broke- so being well prepared helped save us a lot of money.  We had an agenda, literally. I typed out a production schedule for recording because we didn’t have any time or money to waste and we needed to get a lot done.  We had already written and recorded 18 demo tracks to narrow down and choose from, before we hit the studio.  We pretty much knew exactly what we wanted to do, we just had to do it in a nice studio with a good engineer.  Two full days into night, a full moon, flasks of whiskey, beers, a few jazz cigarettes, Chinese food delivery and some Williamsburg pizzas later, we had recorded 13 tracks and the album was finished.

How do you go about creating new music, do you have to be in a certain space, mentally and physically or is i t, when the spark strikes?

It depends on the song but usually the music comes first either way.  It also helps me to be in a really good mood or a bad mood.  Any extreme emotional state is gonna help dictate the nature of the song and those ones tend to write themselves more so than the others.  The emotion is there is just needs to come out.  Lyrics are a different story though.  They involve a lot of the same parallels, but I feel like they can’t just be pure gut feeling like the music is, because I want them to tell some type of story and that usually involves finessing things a bit more and re-drafting until there are some spots of clever word play and more of a through line to the character or situation.   But yeah, it’s definitely a “spark” kind of writing for me.  It’s there or it isn’t.  And it’s funny, some weeks are spark heavy, and others are the complete opposite and turn into practice weeks instead of creative weeks, so striking when the iron is hot is key for us.  Get it while the giving’s good.

Split 7" singles are quite trendy at the moment, who you like to share your split 7" record with?

We have played some shows with the Whiskey Bitches and they know how to have a good time and are a great band on top of that.  We love you bitches.

How do you approach getting your music heard and making an income and what are you feelings about Social networking as a means to musical recognition?

If I had a good answer to that we’d be a richer band.  We do the usual Facebook, and Twitter and Instagram, Bandcamp, and blah blah blah  and all the other sites… but we have tried to take an interesting approach in some aspects because we make short sketch videos to help promote whatever we are doing at the time.  Check out our our youtube page, we probably have 12 of them by now maybe,  www.youtube.com/thebenjeesrock .

I would say PR is also important. If a band makes an album in the middle of the woods and nobody hears it, does it make a sound?  The answer is a hard “no”.   And when it comes to making money playing music… I’d say licensing is the best option to get paid an actual amount worth bringing to the bank.

I think musical recognition stems from repetition and having good songs that people will share on media or pick up on blogs and whatnot.  It has to be good music first and foremost, but creative music videos can help a band stand out from the crowd too.   I think anything creative and unique that helps the band show their personality will help with recognition.

What are your plans for the rest of 2015 and how far do you actually plan ahead when it comes to your musical activities?

We will be debuting our second music video in August, recording another  music video during the summer and a tour is happening in the early fall.  Then we're going to head back into the studio and record another album in late fall.  We’ll have shows in the city throughout that time and will keep making promo videos.  In general, we try to plan ahead a fair amount because everybody in the band is busy.   We have our record release show on July 10th at Bowery Electric and want to pack it out as well!  So mark your calendars.

What was the first gig each of the band ever attended?

The first show I saw was the Roots, Joe’s was a Jurassic 5 I think. Martin's was Linkin Park... and Grahams..?  Not sure.

And finally …. Your views on Apple Music are?

There are so many platforms available now for “selling music” and they are all basically the same, to me.  Spotify, Pandora to Apple, it’s the difference in fractions of a penny to an indie artist.  I don’t think the music or television industry knows what to do with itself at the moment because the internet changed everything.  And the contracts and bureaucracy can't keep up with the speed of technology and the dramatic change in entertainment consumption.  At the end of the day, most musicians are not profiting on plays from any of those platforms and could probably make more money selling five T-shirt at a show than they would for a quarter’s worth of profits from one of any those places.  What’s 10,000 plays of a song multiplied by .007 of a penny?  Grocery money.  But $70 goes a long way at C-Town.  We could cook you a tasty meal with all that. 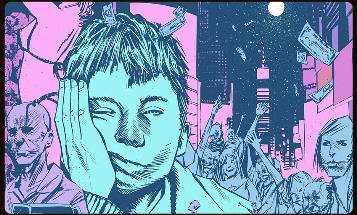