Cranborne Chase is an Area of Outstanding Natural Beauty which lies far from the beaten track on the Wiltshire/ Dorset border, the Chase surrounds the Larmer Tree Gardens which were created as a Victorian pleasure ground. Today the gardens are in demand as a wedding venue with black and white half-timbered buildings, peacocks and parakeets, lawns and laurel hedges carefully manicured providing the perfect background to many couple's nuptials. Since 2006 Simon Taffe (co-founder and curator) has used the Larmer Tree Gardens as the venue for End of the Road festival (EotR) interweaving the festival into the architecture and environs of the gardens.

It only seems in keeping with the diversity of musical offering at EotR that the first band in this traditionally English, tranquil setting are Joe & The Shitboys, a 'Queer, Vegan, Shitpunk band from the Faroe Islands' (their description) who serve up a loud, chaotic, fun, blast to lift the souls of the festival attendees post the drudgery of tent pitching. Three songs are dedicated to “People who piss me off”, 'Drugs 'R' 4 kids' to any kids in the audience and one lucky young chap is on stage singing along to “Shitboys in the house.” A great start. The musical theme continues with the mighty, Pigs, Pigs, Pigs, Pigs, Pigs, Pigs, Pigs . There's general chaos close to the barrier, the very sweaty and hot mosh pit transporting a convention stream of crowd surfers towards the stage as the Pigs dense Sabbath-style riffs rattle the spines of everyone in the tent.

Friday's opening slot on the Woods Stage demonstrates the variety of choice on offer from the EotR musical buffet. After collecting a following from a Pied Piper of Hamelin style walkabout the nine members of Shovel Dance Collective pause at the beer tent for an acoustic song before heading onto the stage. The collective focus on traditional music from the British Isles and Ireland but played with a nod to the contemporary and experimental, re-inventing and passing on the tradition which has always been a feature of folk music.  It's indicative of the openness of the EotR audience that music which is hundreds of years old is given such a great reception.

Amongst several bands checked out on Friday afternoon the highlight is the wonderful Anais Mitchell and her band. Anais plays several tracks from 2022's self-titled album, 'Brooklyn Bridge' and 'Bright Star' from that album both being exceptional. Eric D. Johnson from Fruit Bats (see below) who along with Anais makes up 67% of Bonny Light Horseman joins the band to sing the part of Orpheus on a track from Anais' 'Hadestown' musical. Her band are great as an accompaniment to the main course of Anais' unique vocal which moves from great power to fragile and cracked and illuminates an already sunny and warm Garden Stage. Late evening finds Fruit Bats getting a enthusiastic reception for their So-Cal folk-rock in the Tipi Tent. The Talking Heads stage is hidden in a wooded glade on the side of a considerable slope with hay bale seating and provides a perfect backdrop for Christian Lee Hutson's beautifully played and sung folk tunes with funny anecdotes (fan Anais Mitchell was spotted seated on a tree stump also enjoying Christian's performance).

The biggest headliner clash on Friday is a choice between Fleet Foxes or black midi on the Garden Stage. Judging by the space available in the Garden area the majority chose Robin Pecknold and colleagues close vocal harmonies. However those that chose the Garden Stage had the joy of watching the musical virtuosity of black midi close up. Love them or hate them, you cannot deny the incredible musical talent they possess. Whether they were being self-indulgent, or just mixing it up for the festival crowd, the whole set was a 75 minute blur of drumsticks and guitars. Running through favourites '953' and 'Speedway' from the 'Schlagenheim' album, 'John L' from 'Cavalcade' and numerous tracks from most recent album 'Hellfire'. It was a sweaty, exhausting and exhilarating all at the same time.

Friday night's hangover is blown away on Saturday morning by Sniffany & The Nits loud, shouty punk in the Big Top.  For a musical contrast try Margo Cilker's beautifully performed country rock, highlighting songs from her debut album 'Pohorylle', which document her travels through the States (California-born but Oregon-based) and the Basque region of Spain ( the track 'Bilbao Precipitation'). Margo has an amazing vocal and turns out to also be a lovely person during a brief chat outside the Big Top Tent later in the day.

There's a galaxy of glitter, tassels and shocking pink on the Woods Stage in the form of the LA-based glam rock of Starcrawler. Their sound and stage performance borrows from The Ramones, The Stones, Alice Copper and the Go-Go's combining those ingredients for a set of shout-out anthems. Lead singer Arrow de Wilde gives all the rock star attitude their sound demands leaving  lead guitarist Henri Cash to play the 'Keith' role to Arrow's front person. Their third album ' She Said' is out now. A great performance.

Another great performance is that of Perfume Genius. The large Woods Stage is filled with their  dramatic sounding indie pop as Michael Hadreas swaggers and shashays across the stage and at several points wraps himself in a huge pile of tulle netting. Final track is the epic 'Queen', Michael leaves the stage with the band finishing the track with the sounds of Meg 'Hand Habits' Duffy stunning guitar ringing and wailing around the arena.

The reception which Saturday night's headliners Pixies receive from the near full Woods Stage arena confirms them to be the largest draw on this year's line-up. The rhythm section start the show with the sounds of Paz Lenchantin's bass earth-quaking the ground during 'Gouge Away' which leads to a 'hits' suite of 'Wave of Mutilation', 'Monkey Gone to Heaven', 'Debaser' and 'Cecilia Ann.' There's a handful of tracks from most recent album 'Doggerel' and whilst there's no interaction with the crowd, a set heavy in tracks from 'Doolittle' and 'Surfer Rosa' needs little introduction. Closing tracks 'Where Is My Mind?' and the often played Neil Young cover 'Winterlong' leave a happy crowd heading for some late-night entertainment or their sleeping bags.

“I've got the sleepy Sunday slot”says a surprisingly perky Katherine Priddy who left her home in Birmingham just after 7 o'clock this morning. Katherine and George, her driver and accompaniment on electric guitar, play the gorgeous tunes from her debut album 'The Eternal Rocks Beneath' plus a couple of new songs. Judging by the reception Katherine gets and the queue for merchandising/ signing opportunities at the side of the stage afterwards her performance this afternoon collected a new set of fans. Continuing the chilled Sunday mood on the Garden Stage is Cassandra Jenkins with a set list mainly taken from her wonderful 'An Overview on Phenomenal Nature' album. The combination of Cassandra's almost whispered vocals, plus the gentle, lush orchestration of her band and the taped spoken words create a perfect, comforting post Sunday lunch feel. Beautiful stuff.

Anyone wishing to dance off the post Sunday lunch slump has the option of superb soul band that is Ural Thomas & The Pain on the Woods Stage. Ural is now in his 80s and brings decades of stage craft working alongside Otis Redding, Etta James and James Brown amongst others to his performance. The eight-piece band are a tight mix of soul, funk and a little psych that's the perfect accompaniment to Ural's age defying energy and enthusiasm which he transfers to the audience.

Tucked away amongst the artworks in the woods is the tiny Piano Stage which is largely used for   acoustic performances announced over social media on the day . There are a couple of hundred festival goers lucky enough to have a phone signal who witness a four song set from Lucy Dacus, which despite fighting with the sound of the nearby funfair is another lovely way to spend a Sunday afternoon.

Any guitar nerds in the audience are alerted by the presence of a Flying V on stage, a guitar shape rarely seen beyond the Download festival stages. Although it in the hands of Grace Cummings in the Tipi tent it proves to be a perfect fit for the huge tunes from her exceptional 'Snow Queen' album. Whilst the tunes are impressive Grace's unique voice  is the star  as it varies between deep and menacing and raging-roar edgy enough to tear the tent's fabric. Grace has a refreshing Australian honesty to her crowd interactions “ This song is dedicated to some ***t back home” and “I love being in England, what you lack in cheeses you make up for charisma” being a couple of examples. Final track is the epic, soaring 'Heaven' with the band morphing into Crazy Horse for an extended rock-out finish. Another memorable performance.

“Got to keep on going like it ain't the end” is pretty good advice for any festival attendees succumbing to day four fatigue and also the first line from 'Dance and Sing' sung by Conor Oberst of Bright Eyes, who rescue their Sunday night headline set from potential chaos. The source of chaos is Conor himself who clearly has spent too long enjoying the back stage hospitality; he stumbles and falls over the stage furniture, has a conversation with a small, stuffed toy wolf and frequently rambles incoherently between songs. In many ways it's typical of their sound where Conor's fragile, creaking vocals can suddenly explode into a melodic, emotional crescendo; despite his inebriation he still sings, plays piano and guitar and the magnificent band hold the show together. The musical mood  matches the atmospheric effects as the surrounding Cranborne Chase is lit by lightning. The tracks from 2020's 'Down in the Weeds, Where the World Once Was' are all played wonderfully,  Alynda Segarra from Hurray for the Riff Raff is invited on stage for a duet of 'Haile Selassie', there are a  selection of track from their more than 20 year career, finishing (after an extended rambling intro) with 'One for You, One for Me'. Bright Eyes emerging triumphant from potential chaos.

Simon Taffe can also claim another triumph after this year's festival. Solid headliners, with plenty of other credible choices if the bands occupying top billing don't appeal to you, delights and new musical discoveries to be found further down the line-up and mysteries worth seeking out hidden in the artworks and stages in the woods. As always Trust the Taffe. 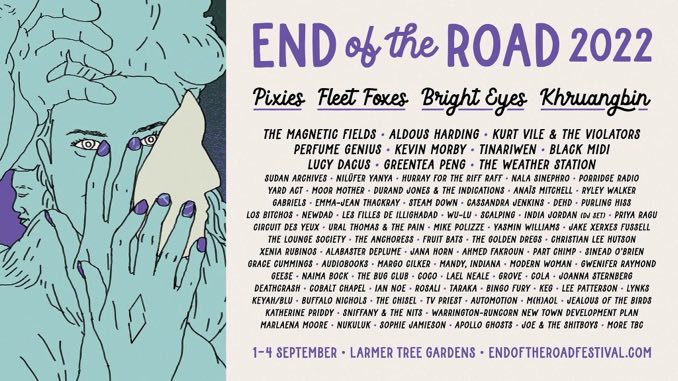