The End Of The Road was my fourth and final festival of the summer. It is a real music lovers festival. Having spent the previous weekend at Shambala, this came as a relief. You can put glitter on your face and fairy lights on your tent, but the main reason people come to the End Of The Road is to hear quality music. Instagrammers, whose main objective is to look to be having fun, are mercifully absent, and although people take photos or the odd short video as a memento, bands are not playing to a sea of phones.

The festival site is compact and easy to get around. There are plenty of side activities, from comedy to literature events, a cinema tent and wellness sessions, but music is End Of The Road’s main raison d’être. I love the fact that festival curator Simon Taffe puts such thought into the in-between-music. Apparently he would often get messages along the lines of “What was the song playing two songs before the headline act?” This year the festival released a compilation of such tracks, entitled ‘Between The Music Volume One’. I am listening as I type.

Food from the vendors was expensive, it has to be said. Drinks not as bad, and I appreciated them having Clear Head, a 0.5% IPA, on tap. The weather was good except for a heavy downpour with lightning on the final night. Toilets were okay, for festival toilets. Long queues at times, but rather than queueing you can always walk to the next block.

So who impressed me the most? From the top, here we go:

My first time seeing Anaïs live, and I was blown away by her performance. She played a large chunk of her most recent album, my favourite album of the year so far. Anaïs is a fantastic songwriter, with a voice reminiscent of Nanci Griffith. Her band consisted of guitar, bass and drums. Bonny Light Horsemen bandmate Eric D. Johnson guested on a song from Anaïs’ acclaimed musical ‘Hadestown’, which they are hoping to bring to the West End. The gig ended with ‘On Your Way (Felix Song)’, a very moving song Anaïs wrote for a departed colleague.

I had ‘undergone’ a BCUC show before, so I knew what to expect, and yet I found myself again shaking my head in disbelief at the end of their gig. It is hard to describe - such a powerful experience. BCUC are from Soweto. Their songs, if you can call them that, are extended pieces of wild percussion, rhythms, rapping and shouting, with segments of gospel-style singing from female member Kgomotso Mokone on top. There are frequent stops and starts, and audience participation is very much part of the experience. It is not often you see a mosh pit at a world music gig.

I first saw Tinariwen in the early 00’s at Roskilde Festival and I have been a fan ever since. The last few times I had seen the band, their founder member Ibrahim Ag Alhabib, had not been with them, and I thought that he had retired from touring, so I was delighted to see him shuffling around in the back, and joining the others on stage after the opening song. He exudes such calm with his wise, ‘seen it all’-face. Abdallah Ag Alhousseyni did the talking (“You are welcome to the desert”) and Alhassane Ag Touhami impressed with his energetic dancing. With hardly any English the band established a much warmer rapport with the audience than many an indie band.

Katherine must have played every festival going this summer and her show is simply perfect. Her songs are really quiet, but she effortlessly holds the audience’s attention. She chats in between songs, has an electric guitarist accompanying her and her voice is crystal clear. When Richard Thompson declares something “The best thing I’ve heard all year” we have to pay attention. I can’t wait to hear what Katherine will come up with next.

The opening act at the Garden Stage on Saturday, Yasmin instantly won over the assembled lunchtime audience. She plays instrumental guitar music. I am no expert, but her style seems very unique. She took the time to explain to us (“y’all”) what techniques she uses. For some songs she taped a kalimba onto the body of her guitar. She was also wearing tap dancing shoes for percussion. At times it sounded like there were three instruments playing, but it was all live - no loops.

Another female instrumental guitarist; one alone would have been a rarity.. Gwenifer Raymond is Welsh, and she is influenced by American blues and clawhammer-style players. Some of her tunes have a trance, drone-like vibe. Gwenifer played at night at the Talking Heads stage, a lovely amphitheatre in the forest. Many guitar enthusiasts were in attendance. I noticed a man filming specifically what the fingers of her left hand were doing. Gwenifer Raymond and Yasmin Williams have toured together. It was a privilege to be able to catch both of them at End Of The Road.

Five female acts among the first seven on this list, and that is purely based on quality, not gender (some festivals seem to have quite a few very average pop/folk acts on to achieve a gender balance). Margo Cilker is a road warrior singer/songwriter, originally from California. A Guardian review mentioned that every single one of Cilker’s songs sounds like a time-worn standard. I appreciated Margo being organized enough to bring CDs and vinyl to the gig and I look forward to really getting stuck into her songs.

Jake Xerxes Fussell from is a folklorist, a collector and interpreter of folk songs. He is from Georgia, now based in North Carolina. He strolls on, says “Hi, I’m Jake”, and when he starts singing and playing guitar it feels instantly familiar and comforting. “This is exactly up my street”, was my first thought, and the 45 minutes flew by. The sound at the Garden stage was fantastic yet again and a real treat to stand among a proper listening audience.

I saw a full John Francis Flynn concert earlier this year and very much wanted to see him again. John performs traditional folk songs, with unconventional arrangements and instrumentation. Drone sounds, two tin whistles taped together, clarinet, plus dry Dublin wit (about temperatures rising across Europe versus Dublin: “They’re all fucked. We’ll be grand”). All his songs are very long, so the 45 minute set felt too short.

The ’Summer Of Soul’ film made me realise that I enjoy soul music, something I had never paid much attention to. What a joy to see Ural Thomas & the Pain, a band from Portland, fronted by 82-year-old Ural Thomas. He was a professional singer in the 1950s and 60s, but did not like the business side of things. For many years music was a hobby, until he met drummer Scott Magee, who assembled a new band for him. The kind of gig that puts a big smile on your face.

Truly unique and very eccentric, Alabaster Deplume plays saxophone, does spoken word and leads a band in improvized pieces of music. It is all bonkers and probably not everyone’s cup of tea, but I loved it. Song titles like ‘Be Nice To People’, ‘I Was Gonna Fight Fascism’ and ‘Don’t Forget You’re Precious’ give an idea of the starting points. Alabaster instructs and leads the band through them, and he jumps for joy when the applause at end comes.

James and Wacław were the final act on the Boat stage. James is a producer and electronic musician; Wacław  a clarinettist with a classical and jazz background. They share an interest in drone and trance music. I had seen both at End Of The Road before, but not together. I still find it odd watching someone pressing buttons behind a deck and equating that with live music, but combined with the clarinet and the fact that much of it seemed improvised, the result was exciting and surprising enough to make for a very impressive gig.

I heard ‘Morning In America’ by Durand Jones & the Indications on an Uncut CD and thought it was an exceptional song. Durand Jones has a great voice and I loved the songs he sang. For some songs he left the stage and drummer Aaron Frazer sang lead in a falsetto voice, which I did not like as much. A gig of two halves.

There was so much hype around Fleet Foxes when they first appeared on the scene that I had let them pass me by. On one of my volunteer shifts at the festival this year, I worked with a girl who was a big fan and she told me about a trip when she had been camping in a forest in Norway and listening to Fleet Foxes all the time. That image was enough to make me want to reassess. Their Friday main stage headline slot had the best sound of the entire festival. Everything sounded crisp and clear, beautiful harmonies and Robin Pecknold is a superb singer. I remain a bit unconvinced by their songs.

Hailu Mergia from Ethiopia held a residency at the Addis Ababa Hilton for years in the 1970s. After getting to the U.S. his professional career as a musician stopped for many years, until he was tracked down by the label Awesome Tapes From Africa, who wanted to re-release his music. Listen to ’Tezeta’, an album of instrumentals recorded in 1975, complete with tape hiss. A great story and great music, though sadly Hailu’s performance at the Garden stage suffered from uneven sound. The bass was too loud and it was hard to hear Hailu himself, who played organ and accordion. 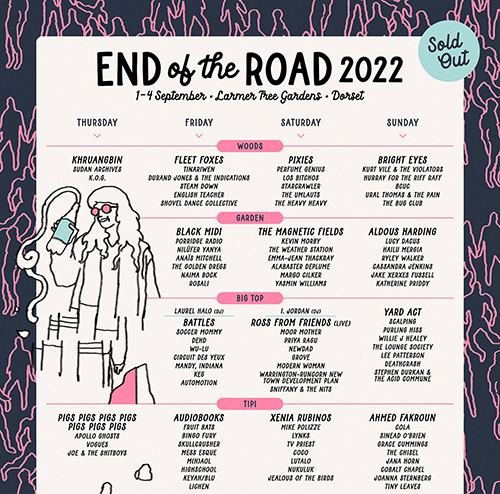