A brief dip into this years GE Festival, which has a well-earned reputation as one of the foremost showcases for up-and-coming artists. There are truly hundreds of bands across multiple Brighton venues and a great vibe to boot !

A sumptuous afternoon spent taking in nine bands, but laced with frustration that my schedule didn’t allow a return on any of the three further days of the festival.

A well organised event with many bands playing two or more sets across the weekend. With so much going on, venues are inevitably a little spread out but such is the quality of the line-up it’s not difficult to organise a schedule into clusters, for example on the three Beach Stages or in Komedia which has a Studio Stage and Basement Stage.

High School – Hailing from Melbourne and formed in lockdown so curiously have never played in Australia . Four piece with heavy bass and drawling vocal giving a Smiths/Strokes feel. No drums, just a drum machine which somewhat detracted from the overall spectacle. Gave outings to new tracks Third Place, The World Is Small and Only A Dream

Brimheim - the driving force behind this band from Denmark is Helena Heinesen Rebensdorff. The Brimheim moniker being a nod to her Faroese roots, translating to ‘home of the breaking waves’. Helena can comfortably be described as having “snarly charisma” as she belts out her songs backed by a solid 4-piece band. But fear not, between numbers songs it’s all lovely smiles and warm acknowledgement of the highly appreciative crowd. Standout track Exquisite Bliss.

Joe & The Shitboys - Fantastic intimidating punk from this Faroe Islands band who describe themselves unashamedly as vegan bisexuals. Like all the sets during the day they had just a half hour slot but managed to cram in a remarkable 26 songs. So for lovers of ‘Comma Comma Comma Full Stop’ (Brakes) and ‘Cha Cha Cha’ (Gilla Band) this is the band for you !!

Heartworms – heart-warming indie rock n roll with searing female lead vocal (in Che Guevara garb) in the sunshine. On the smaller beach stage facing outward to the sea, this was only the second time they’d played in daylight.

Iris Gold - another Danish artist, Iris delivers RnB rap with a forceful punch. Best costume change of the day as she morphed from jumpsuit to huge butterfly wings

Eli Smart - is a singer-songwriter from Hawaii, currently based in Liverpool. Superb collection of breezy ‘Aloha Soul’ tunes.

I can’t recommend Great Escape highly enough for anyone looking to get a feel of emerging sounds and talent . Best enjoyed, unlike me, if you can invest a whole four days in Brighton in early May. Many names sure to feature prominently on festival bills through the summer. 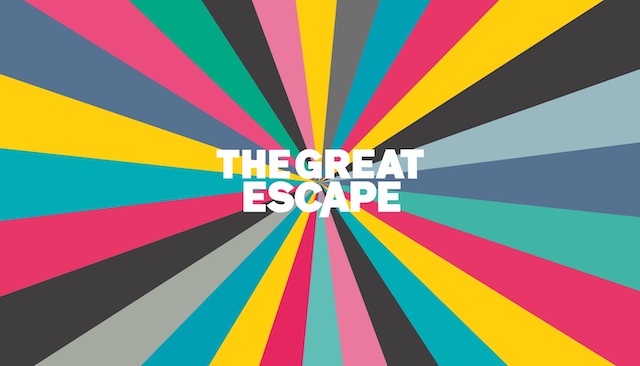