How exciting, finally going to a festival again. And a bit scary! After several postponements and a revised UK based lineup, its Friday and I’m here; negative test results shown to friendly security, I walk in to lovely Moseley Park, and everything looks the same! Well, perhaps a bit quieter, less stalls, but everyone is very considerate, plenty of space for social distancing, lots of hand gel, and it feels safe enough. Many artists express the feelings I guess we all have, of how special it is to be back. And, spoiler alert, I test negative each day since. I was pretty careful though, no late night partying this time.

Not perhaps my usual music, but friends and family are involved in organising, so I went last year and loved it. Always an eclectic line-up, 2019 had Burt Bacharach, and Gil Scott Heron’s musical partner Brian Jackson! Plus its such a great small site, with a lake and lots of trees, 4-5000 capacity, two stages beside each other so very short gaps between bands. And everyone dances, its very relaxing, you can easily get close to the stage.

Here are some of my highlights from this year:

Sipho was the first performer I saw on arrival, so maybe I was biased, but one of the best. Young, and from Birmingham, as many artists here are, his slow passionate androgynous delivery over his own piano and beats evoked people like Berwyn. Interspersed with crazy rockouts too.

Theo was almost the next on, similar in style and passion but with a wonderful sensuality to her voice and movements, and songs like Church and State that drew on her Irish Catholic background. She has just recorded with the globally famous Naughty Boy...who was rolling around on the grass while she played, in a horrendous baggy yellow tracksuit, the sort that only rock stars can get away with wearing. Didn’t seem to put her off. She’s THEO when you look for her online btw. And he’s SIPHO.

Lady Sanity is a powerful Birmingham rapper, with a full band, and she was followed by the Mercury nominated Nubya Garcia, equally explosive but just through the power of her instrumental music. She looked amazing, in army fatigues, quite a contrast to the long black dress she wore at the BBC Proms! She talked about the current thriving new jazz scene, with everyone supporting each other, and followed this up by watching the Comet is Coming from the middle of the dancing crowd. I have loved their albums that I played as homework for this festival, where they take the spirit of Sun Ra on to new universes, with echoes of Hawkwind and space rock. They take their name from a BBC Radiophonic Workshop piece. So I expected a lot, and it was great, but not quite loud enough to do justice to the music. Or maybe my ears had gone by then!

Kofi Stone was another great soulful conscious rapper, who has recorded with Loyle Carner, with a similar style. And closing the Friday night was the Cinematic Orchestra, very slow moving improvised pieces, connecting with some but not all of the crowd. They would have been perfect earlier on, with the Comet is Coming headlining, at full volume! I did wonder if this was an anti-Covid measure to stop us all dancing together at the end of the day.... probably not, but these days, who knows.

Saturday had the only band drop-out of the weekend, not bad for a big line-up, and the necessary reshuffle was well publicised and organised. Daytime highlights for me were Metz Jr, a great front man with some nifty dances and a happy reggae/pop sound, and the Little Easy Band, very different to everyone else, much rockier with echoes of the Eagles and the Faces. Their front man had an amazing voice, but quite a shy stage presence, surprisingly. It was a day for strong voices, with two contestants from the Voice, Kezia Soul from Moseley, and Hannah Williams, a finalist. Nice how they both talked about each other and their friendship forged by the show. Hannah in particular had the most incredible voice, backed by a full blues/r&b band, the Affirmations.

The Cuban Brothers blew the place away with their blend of risque humour and brilliant dance tracks. Their onstage dancing was unbelievable. The main man Miguel (possibly not his real name, as allegedly they all come from Lancashire) did a more hygenic version of a stage dive, climbing carefully over the barriers then dancing with the crowd. They led straight into Craig Charles, from 6 Music, a big fan of this festival, who DJ’ed a variety of mad dance and rock tracks. We all went crazy for it, particular his segues of parts of Martin Luther King’s famous Dream speech into Primal Scream and the White Stripes.

Again a quieter band finished the night, but a very special one, Cymande. Well known to rare groove collectors and much sampled, they are a British soul group who made it big in America around the time of Shaft and the Black Power movement, then vanished after two albums. Virtually all the original members had reformed the band and were recording new material again. The love from the crowd was palpable. Again perhaps a bit laid back for the end of the night, but lovely renditions of classic tracks such as Brothers on the Slide and Bra (slang at the time for brother, not a strange reference to underwear).

Sunday was largely disco dancing day, at least on the main stage. A surprise highlight for me was Odyssey, bringing back happy memories of dancing to Back to My Roots at Barbarella’s, a quite radical thing to do after punk gigs, with the guitarist from the band, Dave Rankin, who is sadly no longer with us. To be fair it’s Odyssey the brand, with just the son of one of the original singers and a bunch of talented musicians. Three great singers, one of whom arrived late after traffic problems but slipped seamlessly onstage into the middle of Native New Yorker to sing her solo. Lots of warmth and humour transcended the showbiz look and sound. They were followed by Jocelyn Brown, well known for her voice on various house tracks and, uncredited, on Snap’s I got the Power, which she didn’t play sadly. In fact her appearance was bit of a surprise, as she is much older than all the publicity pics. Rumours she arrived back stage in a limo turned out partly true as she could not walk unaided. Again great backing musicians, with sound mixing by her son, whom she regularly berated for making her vocals too quiet! She did sound great, although I think she said having Covid had affected her voice. One of her main songs was called We are Here, reflecting all who survived the previous months,including herself.

In a brief interlude I got to meet Lekan Babalola, who grew up with the great Fela Kuti in his studio compound in Lagos. I asked what he was like, he shrugged and said ‘Well, you know, Fela was Fela’, which I am sure was true! Lekan’s music spanned many African influences, and his great band included the amazing Xhosa Cole on sax, BBC Young Jazz Musician of the Year. He joins a line of sax virtuosos from Brum, including Soweto Kinch and Shabaka from the Comet is Coming. Xhosa also played a solo set and guested with Bigheadmode, two brothers who played glitchy experimental funk and neo jazz.

The party started again with Hot Chip - or at least the Hot Chip Megamix, Joe Goddard and two other guys basically live mixing and playing records on stage. They played a few Hot Chip tunes, and lots of other crowd pleasing/unusual dance music. It maybe should not have worked but it really did, and led straight into the Allergies, doing something similar but with more old skool rap and funk tracks. All quite exhausting, so it would have been nice to have another relaxing headliner...but no, tonight it was Mr Jukes, the alter ego of Jack from Bombay Bicycle Club, and his close friend and amazing rapper, Barney Artist. Powerful emotional dance music with a lot of humour too. The irrepressible Barney was actually lost for words at the crowd response, saying this was the best gig they had ever played, and I think he meant it!

An amazing weekend, highly recommended. Just one negative, next day we heard Brian Travers from UB40 had died. Many involved with the festival knew him well, and I was lucky enough to have drunk and talked with him both here at festivals and in the famous Hare and Hounds, where UB40 played their first gig. He was lovely, kind, a true gentleman, always first to buy a round, and deeply missed by everyone. Local radio was full of tributes to him as I travelled home. 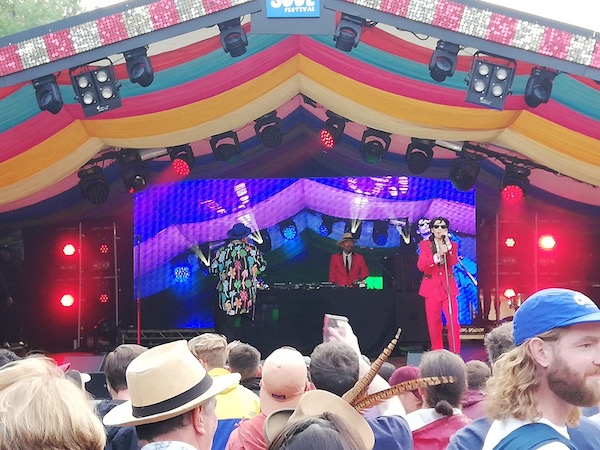