Despite a reduced size and a last minute change to one of the venues Visions still delivered an incredibly diverse set of bands across a wide range of genres. Most of the punters still look like they could be in Black Midi or BCNR (some of them probably are), Bethnal Green Working Men’s Club is a suitably shabby chic new venue (despite the ten minute walk in the pouring rain to get there) and, while the spectre of Covid still lingered (temperature being taken before entry, some mask wearing in the more crowded areas) generally the vibe was as good as always.

Here’s my review of seven acts with seven drinks across the three venues.

caroline and a pint of Guinness. My first pint of draft Guinness in about 2 years accompanies the uncategorizable sound of caroline (specifically written with a small c of course). The 8 band members play in a circle in the middle of the floor with the audience standing round them, and between them cover drums, guitars, strings and trumpet, sharing vocal duties. There’s even a spare drummer who takes up position behind the kit when the other one moves to the cello. Sounding like Black Country, New Road and deathcrash mashed with some folk drone harmonies and a sprinkle of British Sea Power, they play 4 songs in 35 minutes, each different to the last and all thoroughly engrossing. They were well appreciated by the crowd and from the quick chat I had with a couple of band members afterward seem like decent folks too. Well worth checking out, you can find them on Bandcamp.

Martha Skye Murphy and a bottle of Meantime IPA. Martha and her band (featuring the cellist from caroline) took to the stage 15 minutes late, meaning the beer was already drunk. To be fair, she might’ve actually started 5 minutes sooner than that as it was hard to tell where the soundcheck ended and the performance started. Her psycho-goth blend of Tori Amos and Kate Bush has produced some interesting songs on record but, suffering from some sound problems, it didn’t come across as well live. Maybe in the right venue (seated perhaps) with a bit more polish she’d work better.

2.5. Moving across to the Pickle Factory I caught the second half of Grove, notable for a guest appearance from Lynks (and his dancers Lynks Shower Gel). At this point I remembered that she’d joined him on stage at Latitude. She certainly had a lot of energy and the packed crowd enjoyed her full on performance.

Falle Nioke and a can of Camden Hells - step down in liquor but not in music. Hailing from Ginea in West Africa, Falle plays an engaging, upbeat set of songs that have the vibe of Hot Chip backing William Onyeabor. The crowd clap and dance along and a good time is had by all.

Famous and a can of White Claw Black Cherry seltzer - a fruity little number to accompany the act I’ve been most looking forward to seeing so far. Despite a reliance on quite a lot of triggered backing parts the 3 piece don’t disappoint. Jack is an enigmatic front man, with vocal styles ranging from spoiled child to Lou Reed, and posturing that at times reminds me of Jarvis cocker, twitching the mic lead and kicking his foot out into the crowd. It helps if you love his unusual lyrical take on life (which I do) - ‘yeah I know my way around a tune, but I wanna be a children’s heart surgeon’ goes one memorable line - but I find him thoroughly entertaining and will be seeing the band again as soon as I can Yard Act and a pint of Camden IPA - best beer so far. Professional Northerners

Yard Act, the spiritual heirs to The Fall and Half Man, Half Biscuit, successfully tread the fine line between social commentary and self-parody, whipping up a storm with their wry observations on modern life and their sly digs at all things ‘London’

Billy Nomates and another pint of IPA. I’d enjoyed her album when I listened to it for the first time this week, and while Billy has got a good voice I found her performance a bit one dimensional, which wasn’t helped by a muddy sound mix. I left before the end to make it back to the Working Men’s Club.

Loraine James and a Jack Daniels & coke - well it is the business end of the evening after all. Playing the sort of hard and dark techno beats that I doubt have ever been heard in the environs of the BGWMC before, James jumps straight in at full tempo. From there things just get progressively faster and more intense, and while there’s not a large crowd in the quite brightly lit venue, those present (Martha Skye Murphy among them) make the most of the opportunity to let go and dance.

So there you have it - 7.5 acts, 7 drinks, 3 venues, and all for the early bird price of £20. This has been, I think, my 6th Visions festival and the organisers never fail to pick the best of the exciting new acts. Shame, Songhoy Blues, Girl Band, Blanck Mass, Young Fathers and Black Country, New Road are just a few of the acts I’ve seen there for the first time, so it’s the place to go if you want to get ahead of the curve. See you there next year! 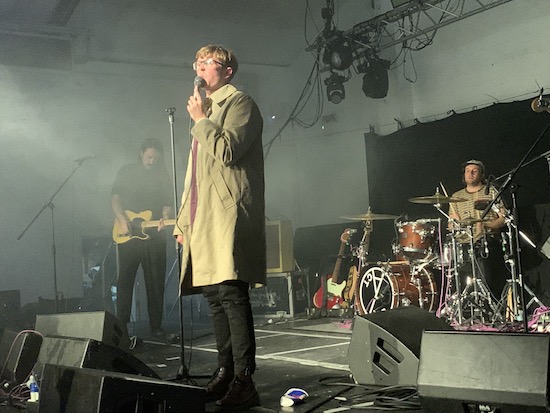