Eight venues across Nottingham hosted the third Beat The Streets festival. All the profits from the festival merch, bars and donations go to the charity Framework which provides housing, health improvements, employment, care and support services to people in need across Nottinghamshire, Lincolnshire, Derbyshire and South Yorkshire.

Due to the constraints of geography the music starts at Rough Trade the first floor of which has a bar/cafe and stage. After her colleague has frantically set up the stage on his own the singer/drummer of duo Witches Mark arrives 15 minutes late for a 30 minute set “Shit sorry, I slept in.” Fortunately their excellent White Stripes blues crunch with added punk make up for their tardiness. The aforementioned singer has a Courtney Love vocal howl through 'Taxi Man' and 'What A Fool' with its great blues slide guitar.

Punctuality is obviously important for Lacey who get the set times back on schedule.“Thanks for coming to see us rather than Jake Bugg....what time is he on?” asks Graham 'Graz' Turner lead singer of the local alt-rock quartet. Lacey are all dressed in black and play modern emo with big chorus and clearly already have a decent local, vocal and young following judging by the audience reaction. Graz has a stage confidence “ An all day festival, what a great excuse for daylight drinking ..and on a Sunday. It's hot as hell up here anyone going to the bar 4 lagers please.” They only get one to share but as Lacey have been building upon some impressive supports slots for Bowling for Soup and others along with their own headliner shows Lacey have justifiably been tipped to do well.

Round the corner to The Bodega where we find Remy, possessor of a confident vocal and jazz-influenced electric guitar, think of a Michael Kiwanuka's jazzy vibe and you get the feel. Remy won the Future Sounds of Nottingham showcase which gave him a slot at Nottingham's mid-summer outdoor festival Splendour in 2019. Highlight is 'Eye to Eye' and Remy puts a jazzy spin on Gnarls Barkley's 'Crazy' which fits the vibe of his impressive set.

Joey Collins is downstairs with his guitar in the more bar area. Whilst his songs have minimalistic arrangements the tracks on his second album 'Requiem' which was released last year cover a range of emotions; depression, anxiety, love, heartbreak, death, hope amongst others and he discusses mental health during his set.. He's picked up several plays on regional radio for the new album. There's a cover of Red Hot Chilli Peppers' 'Don't Forget Me', the lyrics of which fit the feel of his set.

The Leeds based duo Sunflower Thieves are upstairs in The Bodega main room playing pop-folk with their lovely vocal harmonies accompanied by accomplished acoustic guitar strumming and finger-picking. They get a sing along going during 'What if we never find out', recent single 'Heavyweight 'is lovely and they finish with 'Two Halves'. They are also “..grateful that you came to see us rather than Jake Bugg.” Personally I think I picked well.

Next towards Rock City passing the crowds of people who picked Mr Bugg as they leave the venue, to see the ambient instrumental rock soundscapes of Eyre Llew. Local legend and champion of new music in the East Midlands Dean Jackson is on stage to introduce the band. As they've got a 30 minute slot we only get 4 tracks, one of which is sung in Korean where Eyre Llew say they've recently been working “ We were told the Koreans find English really difficult, so we thought we'd give Korean a go”. For the first time in the UK they are accompanied by a string quartet and the addition of strings to their bowed guitars plus the bigger space of Rock City make for a special and very memorable half an hour.

If you want a range of musical styles and are prepared to invest some time then Beat The Streets has that covered. An unexpected highlight of the day is found next door at Rescue Rooms in the soulful, smooth grooves of Jerub playing to a pretty full house. Jerub explains he's here playing with some of his friends and what a tight, professional group of musical friends he's got. Beneath the jazzy, funk tunes there are great melodies with Jerub's rich vocals. He's clearly already got something of a following judging by the enthusiasm and size of the audience. Single 'Hold On' was released at the end of 2019. Well worth checking out at a venue near you.

Adjacent to the main venue at Rescue Rooms is the bar which has a lovely chilled atmosphere and a small performance area at the end. Whist in the bar I catch a few minutes of Obi Rudo and his Anglo-French Hip Hop which not a style of music I feel qualified to comment upon but he appears to go down well with those who are more au fait with it. But that's Beat The Streets, musically there's something for everyone.

Back in the main room for the pop-jazz of Mollie Ralph. Mollie's got a strong stage presence to go with her soulful vocals and gets the audience singing to the Amy Winehouse style tracks, the brass section of trumpet and saxophone give a great lift to the songs. Her debut E.P. 'Old Cafe' was released in February last year and got her regional and national airplay. Another joyful and unexpected delight.

As the bus home approaches there's just enough time for a few tracks in the company of the heavy, grungey riffs of four-piece Velvet Blush. They won the Battle of the Bands competition to get a slot at Nottingham's Splendour festival in 2019. Their live sound has been compared with Hole or The Breeders and true to form they blast through a cover of 'Cannonball'.
In the past two years Beat The Streets has raised over £170,000 for Framework.

If you want to find out more about the great work which Framework do then head to their website make a donation or support them by coming to Beat The Streets in Nottingham next January for a day of a variety of musical styles and unexpected musical delights. 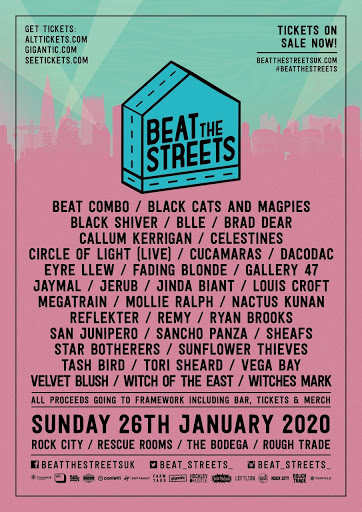