Fairport's Cropredy Convention is a festival I had never been to. When I saw their 2019 line up it was a no-brainer: Frank Turner, the Waterboys, Richard Thompson, Martin Simpson. I could stop right there and justify the cost of the ticket.

The festival has been held annually since 1979, so this year's edition was a genuine 40th anniversary – as opposed to Glastonbury, which has been going since 1970, but has had breaks (there have been 36 Glastonbury Festivals). Looking into the history of Cropredy, they have had an eclectic range of acts over the years: Alice Cooper, Petula Clark, Brian Wilson, Status Quo. Interestingly in an age where many festivals have pledged to achieve a 50/50 gender balance by 2022, Cropredy programmed a grand total of two female acts (Wildwood Kin and Daphne's Flight).

Cropredy is a village in Oxfordshire. The festival is held just outside. When you are on the village green you can actually hear the music coming from the main stage. Villagers welcome the festival and participate keenly. This is quite the opposite of Pilton, where Glastonbury is held, where many locals go away for the festival and rent out their houses. Cropredy has music in the pubs, people sell wares in their front gardens and the church does breakfasts and holds a multi denominational festival service.

Cropredy is a one stage festival, so if you don't venture off site you get to see all the acts. The stage is at the bottom of a slope, so you see well from anywhere. Many attendees bring chairs and even day shelters and stay put all day. If prepared to stand it is very easy to get near the front, though the sound was better a bit further back. BBC Radio Oxford broadcasted from the site and had a tiny tent where acoustic sessions took place during changeovers on the main stage.

The festival has many loyal attendees who come regardless of line up. It is also a dog-friendly festival, which was a first for me. Definitely a different vibe, to see people heading in in the morning with their chairs, cool boxes and dogs-on-leads. As I was watching one night I wondered if the dogs liked the Waterboys, but then I remembered that dogs are simply happy to be asleep at their owner's feet, never mind the entertainment.

Fairport Convention themselves opened the festival with an acoustic set and headlined the last night. I own a copy of 'Liege & Lief', their classic album featuring Sandy Denny and Richard Thompson and I did wonder what the current band has in common with that legendary group. The answer is Simon Nicol, a surviving founder member, whilst bassist Dave Pegg has been on board since 1969.

Also present at the festival was Georgia Lucas, Sandy Denny and Trevor Lucas's only daughter. Georgia lives in Australia and grew up not knowing her parents. It was her wish to come to the festival and meet her parents' friends and fellow musicians. According to the festival program a group of friends, including Richard Thompson, Robert Plant and Ralph McTell, contributed towards the airfare. Georgia appeared on stage with Fairport and a poem of hers was read.

The weather was challenging. Thursday was nice and sunny, but during the night exceptionally heavy rain fell, and my tent leaked. Friday had dry spells but also a lot of rain, and that was followed by very strong winds. Apparently it had been touch and go if Saturday, the final day, could go ahead. The festival is obviously run by a very experienced crew and they did all the necessary so the show could go on.

These were the highlights:

A masterful set from Martin, including three new songs from his soon to be released album 'Rooted'. The area in front of the stage filled quickly once Martin began and everybody listened reverently. With Martin the storytelling is as captivating as the music. He quoted Dylan from 'Blind Willie McTell': “Power and greed and corruptible seed seem to be all that there is”. This was the penultimate show on the last day of my last festival, and fatigue was setting in, but music this good makes you forget that you are tired. I was talking to a man beforehand who had seen Martin in a small club and he doubted whether the show would translate to a bigger stage. I knew it would. The man did tap me on the shoulder afterwards and said, “I take that back”. This was after Martin had finished with 'Never Any Good' and many people left happy but teary-eyed.

Some folks on the Cropredy forum had been concerned about this headline booking: A singer who swears and who has drunken fans whose rowdy dancing might knock over chairs. Add to that a serious amount of rain, and this was an interesting challenge for Frank and the Souls. I was actually curious to see it from further back, to see the crowd's reaction, but in the end I opted for the front anyway. I was standing next to a man in a wheelchair who was right at the barrier. It must have been his spot because when he arrived earlier in the day people made space for him. Frank explained the circle pit concept to the Cropredy crowd and many joined in enthusiastically. Between this show and the performance at the Radio Oxford tent, Frank played three songs from his new album 'No Man's Land', which were fabulous live.
Frank said he felt like a fool playing a song with a complicated fingerpicking part straight after Richard Thompson, but he explained the context. Frank is soon getting married and he met his bride to be at a party, where he was drunkenly discussing folk music with singer Will Varley. Will said that Frank wasn't a proper folk singer if he couldn't play 'Beeswing'. Frank asked if Will could play it and actually he couldn't. Jess Guise was listening to this and said she could play it and went on to play said song. I had heard Frank's song 'How It Began' before, but only now noticed that the word 'Beeswing' is in the lyrics.

A friend who was working security said that up on the hill it got quite empty towards the end of the show. I guess the relentless rain was a bit too much for the “chair people”. Judging from reactions of the Cropredy Facebook page however there were a lot of new converts after the gig. Upwards and onwards.

Richard Thompson said that it made him feel quite smug seeing people standing miserably in the rain listening to acoustic music. From the crowd it felt far from miserable and I would stand in any weather to listen to music this good. The first part of the set was similar to Cambridge the previous week. I particularly loved 'Valerie' and 'Crocodile Tears'. Next Richard was joined by Dave Mattacks, Dave Pegg, Simon Nicol and Zara Phillips for an eight song electric section, which I enjoyed much more than I thought I would. And this time they did include 'I Want To See The Bright Lights Tonight'. A superb show once more.

Mike Scott is on a roll and the Waterboys have released three very strong albums in the past five years. I have to admit that I was a tiny bit disappointed that this was a typical 'festival set' as I would have loved to have heard more from the latest album, 'Where The Action Is'. They played the title track, plus 'Ladbroke Grove Symphony' and a very impressive 'In My Time On Earth', which somehow sounded very appropriate in the countryside setting with slightly drizzly weather. They played other recent material, all of which I love ('Nashville Tennessee', 'Still A Freak'), however it was the same more recent material as the last few times I had seen them. And no surprises amongst the older songs either. I guess it is hard to please a long-time fan. So while it was truly a solid gig, I was not as overawed as I could have been if the setlist had been a bit more adventurous.

Gogol Bordello are a multi-cultural punk band from New York, led by Ukrainian-born Eugene Hütz. I have seen the band a number of times at festivals over the years and I always enjoy them. Eugene is a great frontman, who never seems to get any older. Again this wasn't typical folk fest fare, but at least at the front everybody seemed to love the music and the mad antics.

Always good to see Seth Lakeman, who had a different band with him from the last time I saw him. The set was evenly spread with songs from throughout Seth's career. 'The Educated Man' and 'Portrait Of My Wife' were my favourites. Earlier I had seen Seth play the amazing 'Lady Of The Sea' at the BBC Radio Oxford tent.

I used to have a T-shirt with The 4 Of Us on the back. They played at the very first Trip to Tipp in 1990 but I do not remember seeing them there. This in fact was my first encounter with Brendan and Declan Murphy. The band are now a duo. Their set was based on their latest album 'Sugar Island' and it was a mix of storytelling and songs about growing up during the troubles in Northern Ireland. I really loved it and wished their slot had been longer. Their CD sold out, which is always a good measure of audience appreciation.

Richard Digance is a singer, writer and comedian, who always opens the last day of Cropredy. There was a large turnout for him. Though the same age as Richard Thompson, this Richard presents himself as a pensioner and his jokes and lyrics are nostalgia-tinged. There was a poignant moment when he brought on a friend who had been in the London bombings and another lovely moment was the audience waving white handkerchiefs during the song 'We Are Searching'.

I am not a massive harmonica fan but at a one stage festival you see everything and this can bring pleasant surprises. Will plays harmonica and Eddy accordion. They mix traditional sets with more world music-orientated material. They effortlessly filled their one hour slot with a varied mix of instrumentals.

Another act I would not have chosen to see but I am glad that I did. Adam Wakeman is a keyboard player who has played with Ozzy Osbourne and Black Sabbath, and he is the son of Rick Wakeman. Damian Wilson is a singer with a huge voice. He has worked with many different acts, mainly in the prog and metal areas. As a duo they do an acoustic show, with guitar, piano and vocals, and entertaining stories. Their final song, 'Seek For Adventure', was particularly impressive. 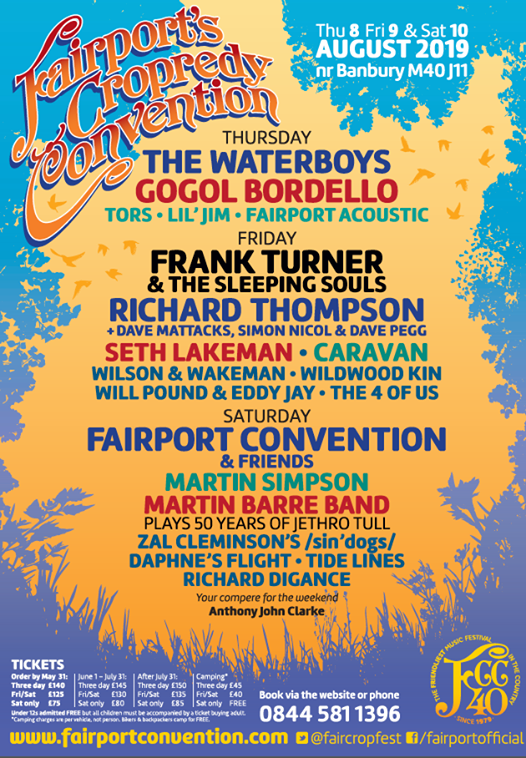