Welcome back to the Black Mountains of Wales for the 2019 edition of The Green Man festival, and a lush green welcome it is. The audience age range at this year’s festival must have been roughly 2 months to 80 years old. The festival has grown into a true family event for all ages, from the fabulous kids area for the tiny tots, to Enstien’s Garden with excitement for people young and old. There is comedy, there are films and talks and obviously, there is the unbelievably excellent line up of music which gets into full swing on the Thursday evening.

There are so many smiling faces around that your face can ache at the end of each day. Everyone is friendly and seemingly on the same page of having an enjoyable and safe weekend. Long may this vibe continue.

Thursday, after establishing Base Camp we make it to the Walled Garden stage for the delightful Bess Atwell, followed by a stroll to the Far Out tent for a dynamic Bodega, who really set the energy level required for the weekend ahead.

Having the Walled Garden stage in operation on a Thursday was a new and most welcomed innovation this year. So a stroll back to the garden for Brigid Mae Power was well worthwhile. New songs in the set were excellent which bodes well for her new album.

Back to Far Out for the end of what looked like a cracking set from These New Puritans to see Amadou and Mariam. On arrival it turned out that A&M were not playing until Friday and had been replaced that morning by The Wedding Present.

For a band that knew nothing of the gig when they went to bed the night before and expecting to be at rehearsal on Thursday, they played an absolutely storming set and one of the top shows all weekend. Do catch them on their UK tour this Autumn if you can.

Friday was the one and only day of rain. This is of course Welsh rain and the main reason the area looks so lush and green! Nobody seemed to mind much and all the stages still had healthy crowds during the 12 hour onslaught. The rain started sometime in the early hours of Saturday and did not stop until the early evening. Wellies and waterproofs where out in force as our day kicked off with the super Penelope Isles in the Walled Garden. A band who have just released their debut album and have a UK tour upcoming. Their confidence is growing  and they payed a forceful set.

Durand Jones & The Indicators brought their superb rock n’ soul  to The Mountain stage and were just the tonic for an increasing damp audience. Superb musicians and vocalists, this band should go far.

Julia Jacklin was next and played a lovely set, but by this time the cold and damp was settling in, so during the slower more sombre songs, your mind starts to wander to a cosy concert hall setting to get the full benefit of her music.

Diving into the Far Out tent for some cover, we found Marika Hackman still tuning up. Having been held up in traffic they only got to play for 45 minutes but the songs are great and the band are in fine fettle, so thank heavens they made it to the site!

Back to tent for a change into something dry and then it’s off to the Mountain Stage for The Fat White Family and a superb dynamic, brooding and dark show!  (it even stops raining). Villagers followed with a polished set before we head off to the rest of the evening to the Walled Garden. First up it’s Bill Ryder-Jones and band in full Neil Young & Crazy Horse grunge mode and it’s  brilliant! Walled Garden Headliner for tonight is Ex:Re which is Elena Tonra’s (Daughter) solo project. It’s a widescreen, cinemascope set of music and rounds off a brilliant Friday.

Saturday dawns with some glorious Welsh sunshine that lasts the day and indeed for most of the weekend. Art School Girlfriend are our first band and what an excellent dreamy outfit they are. Lovely songs enjoyed in the sunshine.

One great tip for anyone attending Green man is that it is a great festival to enjoy with old and new friends. With a Welsh Beer and Cider festival on all weekend long it’s a fine way to pass a sunny afternoon.

We are back at the Mountain stage for a truly wonderful set from Sons of Kemet who are just brilliant and have a massive crowd dancing along. On the 50th anniversary of Woodstock, this is the closest we get to Santana’s ‘Soul Sacrifice’ all weekend. Magnificent!

The reformed A Certain Ratio are back and brilliant. A Manchester band formed in 1977 are on their 40th Anniversary tour and have never sounded better!

Big Thief are our first band of the evening and really raise the bar. Their second album of 2019 is due shortly and they are just superb. The venues will only get bigger for them I guess, well worth catching live next time you can.

Another reformed band next, and an unexpected and massively welcomed reformation it is for Stereolab. It is a brilliant coup for the festival and massively appreciated by the crowd. The music is marvellous and as with all the stages all weekend, the sound is just perfect. Such a joy to see this band live.

Walled Garden for headliners Lamb next. Another Manchester band on dynamic form and with a fine catalogue behind them to play to a fully engaged crowd. Last band of the evening is The Comet is Coming in the Far Out tent.

How to describe this absolutely outstanding band is difficult. A 3-piece, keyboards, drums and sax and a sound that is out of this world. Jazz, Krautrock, funk, soul, rock .... it’s all in there, played with such intensity that the tent is bouncing. An incredible hour.

Sunday is again sunny with a couple of odd showers, so it’s bright sunshine for Rebecca (ex - Slow Club) to unleash her new solo project 'Self-Esteem' on us. Brimming with confidence and some great songs, it a fine start to the day.

One of the joys of any festival is walking past a stage and discovering a musical gem. We did it on Saturday with Art School Girlfriend and today it  is the turn of Foxwarren. A band from Regina Saskatchewan who have a sound you would expect from the prairies and reminiscent of Midlake and Fleet Foxes. Very nice indeed as are, Say Me Sue, a power pop four piece from South Korea who got me thinking, Teenage Fanclub.

Anais Mitchell next playing some songs from ‘Hadestown’ which, is now on Broadway, as well as ‘Young man in America’. She is accompanied by Austin Nevins on guitar for what is a sublime set in the sunshine. Back to the Far Out tent for San Francisco psych merchants The Limiñanas who supply an hour’s sonic onslaught.

For our final evening, it’s a teatime slot for a fantastic happy rocking set from Eels that really gets the crowd in a happy place. This is followed by an epic show from Sharon van Etten and her band. Sharon has really hit the big league this year. Another superb album and a string of fine shows. Tonight was no exception.

Final headliner of the weekend was Father John Misty and his massive stage show. Not just a band but an orchestra and conductor for a 90 minute showcase of one man’s expansive musical talent. The burning of the Green Man and fireworks sealed another fantastic weekend in the shadow of the Black Mountains. 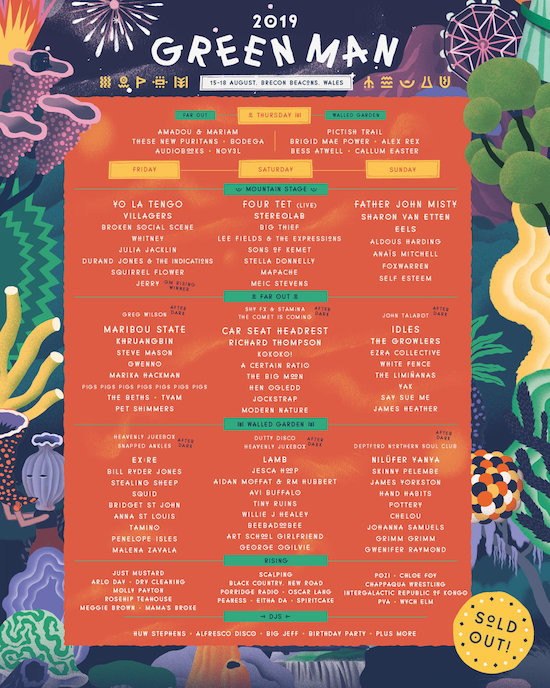