Held in a park in the middle of Winchester, this is a highly family-friendly festival and gave the locals a distraction from the ongoing Tory leadership election, a topic I suspect many of the assembled would be following closely.

The day comprised mainly local acts with a ‘draw’ headliner Magic Numbers, and Milton Jones in the Comedy Tent. Four music stages including the ‘Introducing’ stage supported by BBC Solent which hosted bands for the afternoon before the stage became the Comedy Tent.

The expected array of food stalls and local ales at a reasonable £4.50 with a nod to saving the planet by providing a reusable souvenir cup for £1.

I don’t know have a feel for numbers but this felt like an event that could cater for 3,000 but had only about half that number in attendance. Great in terms of stage access and queues for booze/food but a bigger turnout may have made for a more vibrant experience.

March - Sofar Stage
Female singer songwriter with guitar. Confident stage presence with humorous banter. Accompanied by Fraser and Morgan on guitar and bass. Mostly sweet meandering songs Joni Mitchell style but got more raunchy on older song ‘Difficult’ which saw Morgan wielding a double bass. Occasional dabbling with the lap-top “which I like to bring on stage like I’m an electronic musician”. .

Submariner - Main Stage
Plenty of good guitar work in evidence in these songs; slightly poppey in 2DCC style. Five songs into the set there was a change of pace to a dance vibe with ‘Ghosts’.

Bash! - BBC Introducing Stage
Fronted by the highly expansive Amanda Bashmakova, this six piece were today all in red shirts or red coats - but Butlin’s-style entertainment this definitely was not. A Blondie vibe with excellent harmonies on ‘Lost My Mind’ and a Maximo Park feel to ‘In My Head’. The set started a little early so there was time for an encore which get everyone singing and clapping to ‘Hey Mickey’, a wonderful Wayne’s World guilty pleasure moment.

Lauran Hibberd- Main Stage
Reminded us that her name is with an ‘A’ as dad spelt it incorrectly on her birth certificate. Solid indie pop on ‘What Girls Want’ moving into rockier style with ‘Honey This Is What Adults Do” after which she apologised for singing a song about not wanting children at a family festival

Only The Poets - Main Stage
Four piece from Reading. Enthusiastic guitars in the vein of Magic Gang suiting the family-orientated crowd perfectly. “I was so excited I’ve spilt my beer everywhere”. Their slower songs reminded us slightly of Maccabees tunes, and fair play to the band they got the crowd up and dancing.

Heir - Sofar Stage
From Leeds, initially sounded like an understated Hot Chip. Have recently recorded their ‘Fear Of Falling’ record at Abbey Road studios and in familiar humble style told us all ‘we didn’t deserve to be there’. From where I was standing they justified every minute in those hallowed halls. Concluded the set with an excellent song ‘’After Forever”. Announced they would be touring in the autumn with a full band; though not sure what to make of this as they were 5 strong tonight.

.... after a brief sortie to the Downtown Brown Stage for some slightly drunken dancing with glow sticks we made our way to the main event....

The Magic Numbers - Main Stage
This band is truly ‘of the people’ and lead man Romeo Stoddart could be seen mingling with the crowd as a little as 20 minutes before the set. Given the make up of the crowd it would have been easy for the band to trot out a greatest hits set, but with no compromise they sampled plenty of songs from their most recent (2018) release ‘Outsiders’ including the excellent album closer ‘Sing Me A Rebel Song’ but it was the older numbers from the eponymous first album like ‘Love Me Like You’ and ‘Forever Lost’ that sent a hum through the crowd and showcased the excellent harmonies reminiscent of Magic Numbers live performances 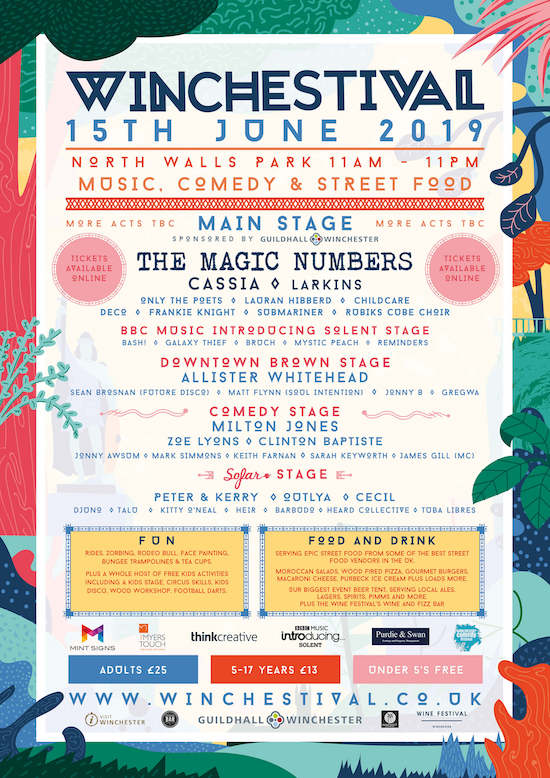