The Great Escape is now a fixture in the Brighton early summer calendar. Multi venues across three days with band playing multiple sets, all having the feel of an industry showcase as well as a good gig-fest. Extending across a wide expanse of Brighton there is most definitely a need for planning. I was able only to attend one day (and had to depart mid evening) but managed to catch a number of great bands.

The Visual (Komedia) - a dreamy start to their set and it rocked up a bit (but only a bit). Penultimate song got really lively with a mic-stand knock-over moment leading to beer spillage over the guitar pedals - resulted in the final song being played with one band-member down but oddly it was the drummer who absented himself, the guitarist played on.

Yes We Mystic (Green Door Store) - was really looking forward to this set after listening to their ‘latest’ album ‘Forgiver’ which Tidal indicates was released in 2019. Turns out this was their 2016 release and the only song I recognised was one they described as an oldie. Only played for 20 minutes, 4 songs. I’m all for brief, punchy sets at festivals but this was most definitely in the underchanged category

Lucia (One Church) – Guitar band from Glasgow, lead by Lucia. In yer face rock barely softened by the roses garlanding the mic stand. Third song in “we wrote a new set list and we both played the same wrong song at the same time”

Pom Poko (Jubilee Square) – this was on my ‘must see’ list so I must confess I was a bit miffed to find they were playing on the ‘free’ stage in the middle of the city. The sunny early afternoon slot meant that a lot of people had wandered across to watch on their lunchbreaks so our best vantage point was from the side of the stage.

Pom Poko’s songs are lyrically crammed with arty references so I was expecting lead singer, Ragnhild, to rock up sporting an either (or all of) an outlandish outfit, hairdo or make-up. None of it. This was a straightforward denim-clad girl-next-door look – but rocked out the excellent tunes on their ‘Birthday’ album with energy and passion. Was able to observe the drummer side-on – always a privilege when it’s someone with such mastery of his instrument.

Pip Blom (Hideout) – the band were playing 3-4 sets across the day, but this mid-afternoon outing required a bigger venue. I managed to squeeze in for second half of the set – but worth the wait. A very tight band. Excellent songs. Very sweaty.

Working Men’s Club (Hideout) – once in the venue decided to stay put even though I had previously decided to swerve this band. Turns out I was listening to the wrong band beforehand. This one, recently described as ‘the best new band to come out of Manchester’ lived up to that billing with an action-packed set of gnarling songs with lead singer venturing into the crowd whilst beating the life out of a cow bell. Interestingly they had no drums on first two songs, using a drum machine instead, but thankfully the sticksman took over for the rump of the set adding a further visceral layer to their tunes. Hat’s off to this band – this was a very small stage and they had only a few minutes to set up but no prima-donnas here – just got on with it.

Indoor Pets (Hideout) - all bands should have walk on music. Even in a small venue such as this with the band pushing through the crowd to get to the stage it enhances the flush of expectation. So hats off to Indoor Pets (previously in slightly different guise Get Inuit). Superb set with shades of a Dandy Warhols/Vampire Weekend mash-up. New track ‘Couch’ from forthcoming album was a particular treat, featuring thrashing guitars

Body Type (Komedia) – a band in the ‘Big Moon’ mode and at one point even did the ‘collective gathering round the mic’ thing. Not loud enough for this venue making it a little underwhelming, a shame as it didn’t do justice to their solid eponymous debut album. 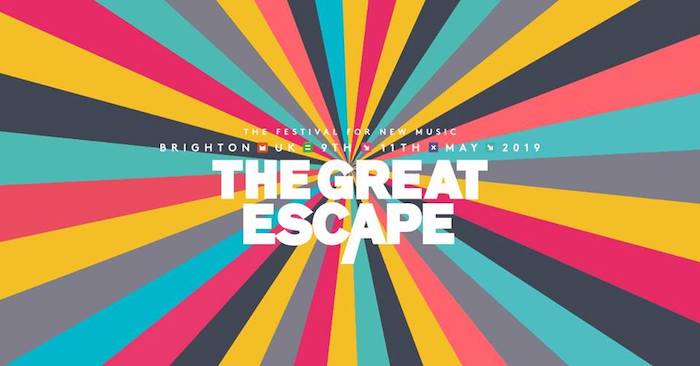