An inexpensive all-dayer (£17 per ticket) featuring 18 bands. As the name suggests, mostly noisy guitar outfits so a full on day. The event was held in Southsea’s Wedgewood Rooms, with acts alternating between the main venue and the smaller ‘Edge Of The Wedge’ which was curated by local DJ and event organisers Calamity Cratediggers.

The festival carried Pistonhead Beer as a named sponsor but sadly this was only available to the bands. The Wedge is however a good supporter of punters looking for interesting beer and had some good bitters on from polypins in both bars. We had to come up for air a couple of times during the day but still managed to catch 15 bands.

Fat Earthers – drum and guitar combo. Topically titled songs with angry lyrics covering taboo subjects ‘Suicide’ and ‘Letter Bomb’ amongst them. Early Clash with added grunge. Very loud - a beer was knocked off the PA and droplets from the ensuing puddle started bouncing upward such was the ferocity of the guitar.

The Howlers – dressed in black, befitting the Horrors/Toy sound from this guitar, bass & drum trio. Recent line-up change had stand-in (Mike) on bass after just one rehearsal

Number 9 – a sixties vibe, not just the music but also the florid shirts. Jangly guitars with the two lead singers switching the lead vocal. Harmonies aplenty and Oasis-like melodies.

Drusila – Only two of ‘em. Drums and a front man on keys/vocals. “We are a Portsmouth band. ...... A psychedelic band..... well I suppose it’s electro-indie....oh, and we’re a bit dancey so please step forward”. If they were a multi-choice question, the correct answer would be All of the Above. Not usually my go-to genre but this was a highly accomplished set, the most uplifting of the day so far.

Japanese Television – well we’ve had ‘House’, ‘Breakfast’... now ‘Television’. Psych funk keyboard front and central, flanked with guitar and bass. Hawkwind with Kraftwerk overtones. Could have been Dr Who backing music. The small Edge Of The Wedge Room was very hot. The excellent drummer was the sweaty backbone of the set.

Freya Beer – easy to misread, but sadly no free booze. Instead an interesting female singer on guitar with drum accompaniment

Mystic Peach – Tuneful indie guitars with lots of angry shouting. Some good tunes but you couldn’t help be distracted from the melodic structures by the shouting. Couldn’t fault the energy of the diminutive front-man

Egyptian Blue – Find of the day. From Ipswich/Colchester. Just when you think you’ve seen every great indie guitar band a new one comes along. The opening chords of many of the songs had a ‘Thrills’ jangle but the motor of the tunes was Cribs-like, with Talking Heads style vocals. The visually excitement is enhanced by the classis right-handed/left-handed lead guitars leading the frenetic assault. Excellent band – looking forward to catching them again later this month at All Points East.

Los Bitchos – This is Mariachi al BigMoon. They were on the bigger ‘Wedge’ stage which suited them well. More guitar breaks than I recall from seeing them previously.

Nice Biscuit – I love bands who make an effort. And this was certainly the case with Nice Biscuit. Two girls in satin, sleeveless onesies with silver collars and matching eye-shadow. Four fellas in white jumpsuits adorned with orange stars, one of whom was sat on the PA with his back to of the audience – not from shyness but rather as had a leg in a plaster boot. Hat’s off to him for commitment ! Poppy tunes with trippy interludings

Black Country, New Road – my favourite new band. Seven on stage and long periods in their set where 3 or 4 of em aren’t playing, notably the Saxophone, violinist or keyboard. In fact the keyboard player is the epitome of cool ‘elegantly bored’. But when this band moves into their stride they present a panoramic free-ranging jazz funk sound like no other. Simply mesmerising and all underpinned with a unique vocal teetering on the disturbed at every turn.

The KVB – A lad on guitar and girl on keys. Drum-infused tunes. Lively songs to make you get your dancing shoes on.

Sweaty Palms –Like a ferris wheel ride..... took a while to get going and I wasn’t certain I was going to enjoy it but once this Scottish five-piece guitar band (plus sax) got into full flow it was exhilarating.

An excellent day to kick off the Bank Holiday weekend and most definitely whets the appetite for forthcoming festival events this summer. 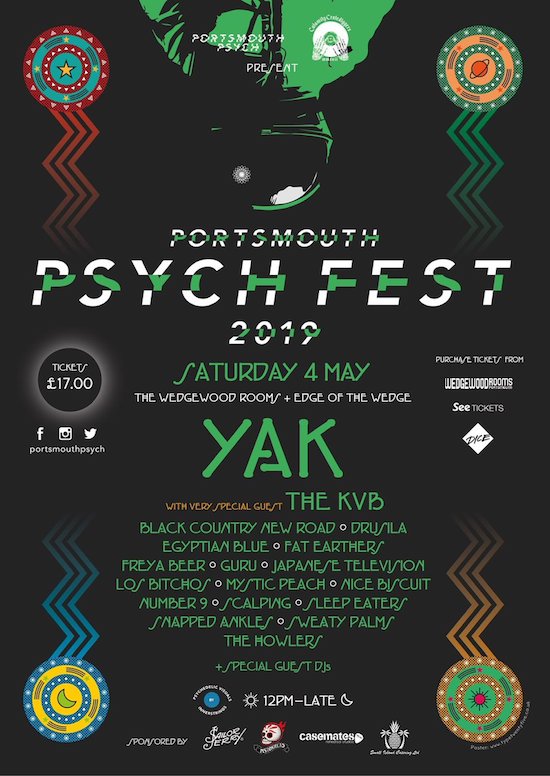