It's the end of the official festival, it's a glorious day, and our plan is to combine 2 of our favourite things...craft beer bars and lovely bands 'Music For Listeners' (a radio program based in San Antonio, Texas) is putting on an afternoon of music at Lazarus Brewing Co..and we wander over to catch a couple of bands...and drink some fine craft ale. Lovely venue for bands, a large outside stage, plenty of room..easily a new favourite in Austin.

Up first is Jealous of the Birds. Led by former English major Naomi Hamilton, she crafts all sorts of songs, from punk to power ballads, and drifting into Americana and her and her band are a wonderful start to the day. Naomi singing and on an acoustic guitar, accompanied by guitar, drums and bass player..it's a great little band and fitting for this sunny afternoon patio.

Another Craft beer is purchased and we stick around so that we can catch the set from the young Welsh kids Boy Azooga. These kids are funky and fun...a big heavy guitar sound..dreamy pop songs performed by a band that's clearly having a good time. It's an energetic set of rock n roll and it is very very tasty

We reluctantly have to leave this perfect venue to return to another of our new favourites and we are back to the Scoot Inn for the Marcus King Band. Marcus is a very talented guitar player and he leads this big band through a set of heavy blues riffs, some classic soul/R&B sounding songs, instrumental jams, and a lot of energy. I think with this local crowd, the band could have played anything and they would have been happy but the bands works hard to make the most out of every song..it's another full set of treats from this talented band.

Now we are off to the Brit Embassy..again

We walk right into the afternoon session to see Harkin perform. Formerly of Sky Larkin, Kate Harkin now heads up this new 3 piece with their 3rd ever show. Unsigned and raw..they work through a straight ahead set of rock n roll. It's pretty solid for a third show

Island is up next. This 4 piece is one energetic guitar band. Very cleverly put together songs, it's a wave of guitar..drums..some great melodies..different levels of intensity comes from the stage and it's rather intoxicating. I had listened to quite a few of their songs before I got to the festival and the songs sound even better live. There is not weak spot in this band. They are very very good

The next band though..takes the showcase to another level. The Snuts are a massive sounding Scottish band. It's Arctic Monkeys..Kings of Leon stadium level and these kids are distinctly more accessible then anything we have heard...but not in a way that would turn most rock purists off. Lead singer Jack Cochrane has a voice...one of those voices that can push songs to a new level. There is something here that is immediately drawing the huge crowd to pay attention and I must say, these kids can play some fantastic indie/rock n roll. These guys will be well beyond this size of stage soon..it's great to see

Seems fitting that we keep to a theme of great Scottish bands as Fatherson is up next. Lead singer has yet another wonderful voice and he sings his indie rock ballads and anthems accompanied by a massive/intense wave of sound from the band. The tempo changes within each song make for a rather exciting dynamic ..with some pretty powerful guitar work and drumming ...it's well planned and orchestrated rock that makes for a great package. It's never too loud or too soft..just a balanced approach that works.

With the showcase coming to an end..it's dinner time and having spent the day here at the British Embassy, we decide to change up our plans and head to Antone's after eating

Antones is having a special evening with a night being curated by the Georgia Theatre..a legendary music venue in Anthens, Georgia. It offers us the opportunity to see a few bands we know very little about..and one that we rather enjoy already

First up is Parker Gispert. Former singer of The Whigs sits onstage accompanied by a keyboardist and they plow through a set of roots country songs. It's a little rough at times but it's often rather delicate..I think with a full band behind him it would fill out the songs to make them a little richer

Illiterate light is up next. Yep..this is the 3rd time seeing them and it's even more beautifully manic then before. Seems most of the bands performing are friends of the band so it has risen them to a new level. By now we know the songs well so it's easy to see that they are clearly having fun and sound wise..the songs have not sounded better.

Next up...it's The Sleepwalkers. We knew nothing about them before arriving but sure took notice of them quickly. Big Keys..big guitars, and even bigger harmonies they create a mammoth Americana rock sound. These guys are the real deal..it's a wonderful Georgia/California blend..it's lush, summery and a bit of a throw back to the 70's. They have perfected a vocal harmony style that is immediately endearing and it is the combination of rhythm, melody and lyrics that make this a fantastic set.

Next is Palm Palm and I have a hard time figuring these guys out. Led by a very charismatic singer, it's more of a production then a set of music. They sure try hard and when the singer slips into what surely sounds like "Journey" mode..it sure gets odd. It's sounds good, but what is it? It's hard to take serious as the lead singer talks in a way that is utterly confusing and before I can really figure it out..it's over

Technical issue now appear to have delayed the next performer and i am only able to stick around for a couple to songs from Susto. This 5 piece start off slowly with a lovely indie rock/acid country? sound..it's an odd mix but interesting enough but I wanted to end the evening where I usually do and it's off to the Brit Embassy

At the Brit Embassy I am able to catch most of the set by Easy Life. These kids make some rather tasty and fun bouncy hip hop/rap. It's funky..it's fun..it's what you kinda need as you approach 1am on the final day of shows. There are 5 of them up there and I gather they have been together for awhile..I actually quite enjoy their entire set.

Last up is The Amazons. It's late but I stick around long enough to hear 4 songs. It sounds better here at this venue..a big full guitar sound, it's a pleasantly sweet rock n roll end to the evening.

That's is for official showcases and it's off to bed!! 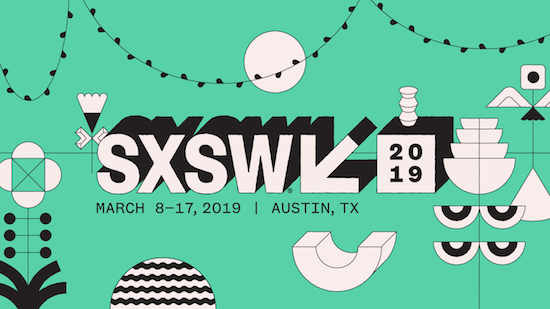