A 2-day festival conceived and curated by The Decemberists and held in their home back-yard in Missoula, Montana. This is the second time the band have organised such an event and this time round they headlined both nights with the promise of playing their ‘Crane Wife’ album in full. As one of our favourite bands this gave us a good reason to organise a holiday in the North West corner of USA, taking in other music hotbeds Portland and Seattle as well. Accommodation for the festival weekend was a motel in Missoula – the handy courtesy festival shuttle was an iconic yellow American School Bus.

The Big Sky Brewery Company were principal sponsors and hosted the event at their facility which incorporates an amphitheatre. For this weekend this main stage was supplemented by a second in an open–sided tent. The brewery made a good number of their excellent craft brews available over the weekend none of which were left unsampled.

Our expectation was this was going to be a crowded festival, but with only 4,000 people this made for a very comfortable weekend with zero queuing. The stage times were dovetailed so we were able to take in almost everything from the varied line-up.

Rotgut Whines – Drum Guitar combo. Kings Of Leon without the brothers and cousins. All American scuzzy guitars. Standout number was ‘Come Over And Kill Me’

Lucy Dacus – With 3-strong band. Featured mostly songs from excellent 2018 album ‘Horizons’ including the wonderful ‘Pillar Of Truth’ dedicated to her grandmother. Set brought to a superb close with ‘Night Shift’

Matt The Electrician – America’s new Seasick Steve ? Originally from California, spent a lot of his life in Oregon but has lived the last 20 years in Austin, Texas. Spun an amusing yarn of how people in Texas had been entirely accepting of him as an Oregonian, but how opinions changed when he revealed he hailed from California (!!). His wonderful songs were supported mostly with his wife Deana Falconbury on vocals.

Tune-Yards – Slaves to no single genre. This was a wonderful mash-up of everything we all love called ‘rock n roll’. Entertaining from first minute to the last

Waxahatchee – Solo this evening. 45 minutes included a strong showing from forthcoming EP ‘Great Thunder’. Her slightly dull-toned vocal is a superb compliment to the keyboard which she described as “an instrument she didn’t know how to play” - it sounded fine from I was standing. A real highlight of the undercard and one of the stand-out sets of the weekend.

Death Cab For Cutie – Interest reignited with airplay of recent single “I Dreamt We Spoke Again”. Played a rockin guitar set with occasional change of pace when lead singer Ben Gibbard took centre stage for a solo number. Enthusiasm across the crowd reflected their status as local favourites

The Decemberists – Headlining both nights; this initial evening was a mix of old and new. Opening few numbers leant heavily on 2018 release ‘I’ll Be Your Girl’, a great addition to wonderful Decemberists compendium. But as the 100 minute set developed so they wove in other favourites. Highlights including Rox In the Box (from “The King Is Dead”) and Rusalka, Rusalka standout track from the ‘I’ll Be Your Girl’ album

Gaelynn Lea - Truly inspirational. Comfortably allowed us to look beyond disability into the beauty of her music. First 3 songs were solo with bowed violin on loop which was a little cloying in parts and had a tendency to swamp the delicate vocal. Latter part of the set saw Gaelynn accompanied by Chris Funk on guitar plus assorted other members of the Decemberists troupe. This gave the songs better balance. A cynic might say the swollen and appreciative crowd were drawn as a result of the inevitable Decemberist personnel appearance. Either way these were excellent tunes with wistful, heartfelt lyrics.

Tiniarwien - Sporting the usual assortment of highly coloured outfits and spotless white headgear. Opened the Main Stage proceedings with a set of meandering and mesmerising tunes. If they were lifted from the stage and dropped into a wedding their moves would definitely be viewed as ‘Dad dancing’ but they somehow pull it off.

Cardiod - Dressed in black. Most songs were dark and moody in nature. Latter half of the set got rockin and featured the best drumming of the weekend. An album worth checking out.

Mavis Staples - Reminded us that her family had been entertaining us for 69 years. An excellent crowd-friendly performance featuring R&B classics across the decades.
Whitney - Not a steel guitar, just an excellent guitarist, Max Kakacek, giving their songs a country-tinged feel with added texture from the trumpet.

Julien Ehrlich - was rooted front and centre playing drums on a riser, remainder of the band (Guitar/Trumpet/Bass/Guitar/Keyboard) behind and around him. Set comprised mostly songs from their first class LP ‘ Light Upon The Lake’

Parquet Courts - Playing the smaller stage so understandably very busy though not as rammed as I was expecting, perhaps reflecting the make-up of the crowd drawn to this festival for the laid back vibe. A simply superb 45 minute set from New York’s finest. I love this band not least for their no-compromise attitude. All the bands were hand-picked by Decemberists leading to them all taking time out to thank their hosts and declare how honoured they were to be playing in Decemberists’ back yard in Montana. Not Parquet Courts........ they simply pronounced they were playing in the State that ‘nobody has ever heard of’ added with “What is a Decemberist anyway? ...... I don’t even like December “. But no time for reflecting on these minor anarchic declarations as they sped through a fantastic set featuring songs from 2018’s ‘Wide Awake’ (Total Football, Freebird 2) and a raucous medley from debut LP ‘Light UP Gold’ (Master Of My Craft, Borrowed Time) which set the crowd into the most frenzied mosh-pit action of the weekend.

The Decemberists – ‘The Crane Wife’ is in my view The Decemberists’ coming of ago album blending as it does the wonderful home-spun yet fantastical storytelling this bank is renowned for, with ever-so-slightly overblown prog rock passages. I am a huge supporter of a band playing a whole album through – and when it is a work as strong as this it makes for a highlight of the gig year. The naturally rapturous reception was followed by a seven song encore with the excellent ‘Everything Is Awful’ and ‘The Rakes Song’ – a brilliant conclusion to proceedings.

In his euphoric state, front-man Colin Meloy declared “we must do this again”, but more measured press comments suggest this is a massive undertaking for the band to organise so it’s unlikely to be an annual event. But should it crop up on your radar over the next few years it’s definitely one to check out! 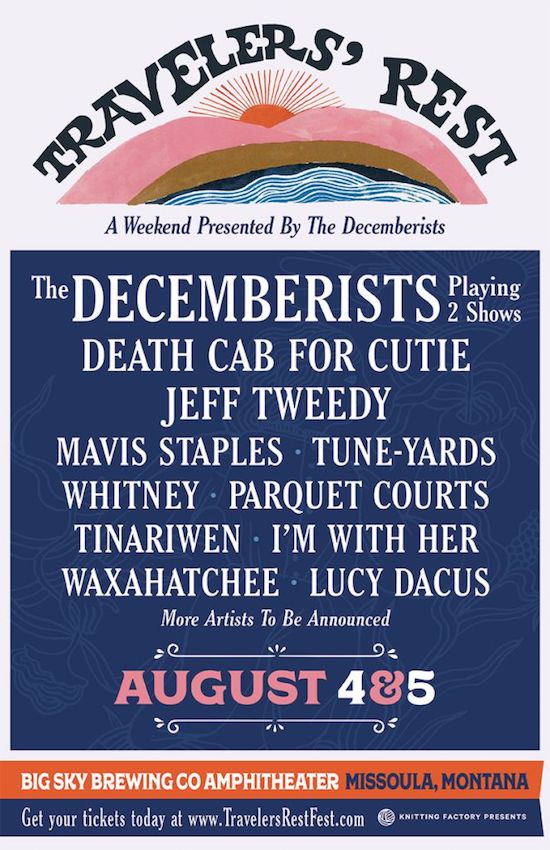