Well the Black Mountains of Wales provided us with a completely dry festival this year with some amazing music, food and err .. beer. This was a weekend to remember.

Thursday with base camp established was a sunny afternoon with plenty of activities going on around the site. The festival has a brilliant family feel and the smiles were broad on most of the faces around the site.

Bands playing on the Thursday night saw International Teachers of Pop, Bas Jan, The Pictish Trail (Johnny and band really threw themselves into this set) and finally, Public Service Broadcasting who now have such a collection of music that each show can throw up different themes. Tonight it’s the latest album ‘Every Valley’ that forms the main part of the set with the story of the Welsh mining community and an added Welsh male voice choir to round off the evening.

The ‘Chai Wallahs’ tent was on the go with up-coming talent all weekend and tonights stand-outs are Hempolics who had the whole tent and the sizeable crowd outside dancing!

The stages around Green Man are easily accessible so provided the bands or artists are not on different stages at the same time there is usually a 20-25 mins overlap so that, you can catch say 20 minutes of 'The War on Drugs' on Sunday then, leg it to the Far Out Tent for the whole of Brian Jonestown Massacre.

The only band I couldn’t get over the weekend were Folllakzoid otherwise there were outstanding performances all of the place. Friday saw great sets on the entire Mountain stage line-up from ‘Rising winner’s Park Motive’via indie darlings Amber Arcades who were followed by a superb solo set from Eleanor Friedberger.

King Tuff rocked and Joan as a Policewoman was sheer class. The Lemon Twigs were the fun band of the day. As their first Green Man appearance was on the main stage, they said next time they expected to play the pizza stall rather than head further up the bill! No chance of that!

Personal highlight set of the day was Dirty Projectors who are such a unique band. All weekend the sound on the Mountain stage was ‘spot-on’ and for this band with so many twists and turns in their music, nothing was loss in the mix.

A couple of year’s ago King Gizzard and the Lizard Wizard played on a Thursday evening in the Far Out tent and were second on the bill. Tonight they headlined the main stage and with the magical psych images on the video screen the first sixty minutes of the set flashed by in a psych whirl. The last 30 minutes saw the band mix up the tempo a bit more presumably, so they could catch their breath! That was just the main stage elsewhere during the day Juanita Stein, Duds, Wye Oak and Snail Mail really stood out.

Saturday’s first really triumphant set was from local heroes Boy Azooga who went down a storm in a packed Far Out tent. Courtney Marie Andrews got the sunshine on the main stage later in the afternoon. An incredible voice backed by a great band playing some great songs of love and heartbreak was just the tonic.

The evening arrived with a beautiful set from Phoebe Bridgers on the small and charming Walled Garden stage. Even the soundcheck was entertaining!. The main stage saw a very confident set from Cate le Bon who really is now a refined performer. This was followed by a revitalised set from John Grant (new album on the way) and the last show of their eighteen month world tour from Fleet Foxes which was superb.

Sunday and the sun was out all day pretty much. 'A charming set from Freemantle’s Stella Donnelly was an early highlight. A great sense of humour and lovely songs. Charles Watson (one half of Slow Club) had a sizeable band present for his Walled Garden stage set. Lovely songs drawn from his new solo album ‘Now I’m a River’ went down a treat in the afternoon sunshine. Jane Weaver, Rolling Blackouts Coastal Fever and Kevin Morby all turned in excellent sets to round off the afternoon before the final evening brought a tremendous show from Grizzly Bear and a head and shoulder triumph of a set from The War on Drugs.

Personally I elected for Brian Jonestown Massacre who played a dark brooding and sonic set to complete another brilliant Green Man! Oh and then there was the fireworks!!! 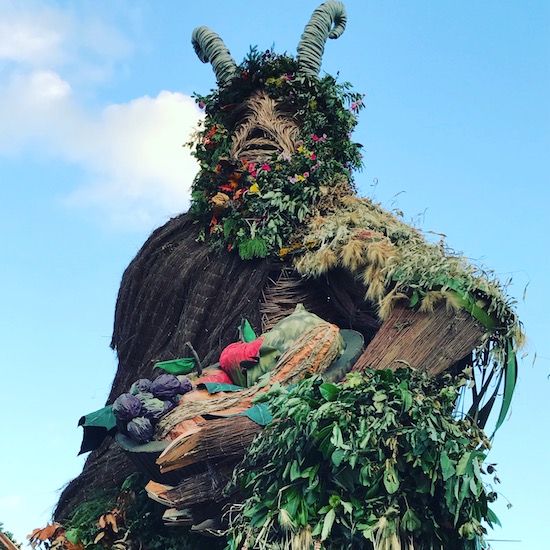