It is not often you find someone so adapt in the movie world that they can switch and make such good music outsi the regular day job.‘A False Para’ has a dark Warren Zevon esque approach and packs a varied pace.’ The Emperor’s Old Clothes’(ballad) and Atmosphere’ (rocker) are cases in point early on.

The record’s focal points are Johnny’s gravelled vocals and scorching guitar solos. The said guitarist is Kevin Armstrong who, is a true Master of his tra then there is, Quillon Larratt on drums, Rob Lucas on bass, Andrew Spooner on keyboards and Christine Lockhart, Vashti Gleave and Laura Matthews on backing vocals.

With such heavyweight backing the songs struggle to remain sparse, which may have suited some of the arrangements more, however, take it as it comes and you have a winner on your hands, The record was written and record over the last two years in gaps between screenwriting and film-making which, must has given a wi ranging perspective to the song writing.

As a but it is impressive and I think a ‘grower’. Another ia would be an acoustic / electric gig, covering the album in both styles and, a bonus disc of acoustic mos! 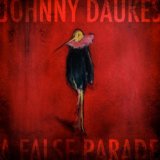 6. First Blood to the Young One