A dreamy record for dark times. Distractions is not ‘a lockdown album’. As singer Stuart Staples says, “I think the confinement provided an opportunity for something that was already happening. It is definitely a part of the album, but not a reaction to it.”

The album has a linkage to its predecessor ‘No Treasure' where as a band they sought new ways to approach known song structures from within familiar band methods and dynamics. For 'Distractions', those dynamics shifted. “It was the opposite of No Treasure but hoping the sense that everybody in the band used their musicality in a different way,” says Stuart “and we ended up in a different kind of shape.”

This is a band undoubtedly not prepared to sit still. Branching out in new sonic directions. 'Distractions' is made up of seven songs, four originals and three very eloquent covers.

“I Imagine You” has a spectral feel with David Coulter on the musical saw yet steered to its own tune. As Stuart puts it, “I think it’s a song from down the back of a sofa, disappearing down there, losing a sense of connectivity to the world.”

An absolutely beautiful cover of Neil Young’s “A Man Needs a Maid” is next up. Something described by Stuart as “unfinished business” for the band had circled it for about 10 years and now with Gina Foster’s aching harmonies it has reached a perfect conclusion. Another song the band had floated around for some time is “The Lady with the Braid” by Dory Previn, which now gets the Tindersticks treatment.

Also reaching back decades, is the cover of Television Personalities’ “You’ll Have to Scream Louder” from the band’s 1984 album, ‘The Painted Word’ “My anger was about thinking: could these things really happen again? Said Stuart.

The third original song on the album is ,“Tue-Moi”, a reflection on the 2015 terrorist atrocity at the Bataclan. Dan McKinna’s piano provides a achingly tender backdrop to the song’s lament, sung – as Stuart felt was needed – in French. “That whole time hit me hard,” he explains. “Just knowing the smell of the place, how it feels to be on stage there, made me feel very close to it.”

“The Bough Bends” is the album’s epic closer. Opening with bird song it rattles with a frenzied guitar break from Stuart Staples rather than band guitarist Neil Fraser, reflecting the willingness within the band to shake-up some roles,  that keep the album buzzing and alive.

The record itself took seed from January to June 2020, before the band reconvened at Stuart’s studio to develop the ideas and the album was completed September.

Where the band go next will be as interesting as how we all come out of our current predicament. Bright and fresh, with the summer sun on our backs and full of new ideas and aspirations. Fingers crossed.

‘Distractions’ by Tindersticks is released on 19th February via ‘City Slang’ 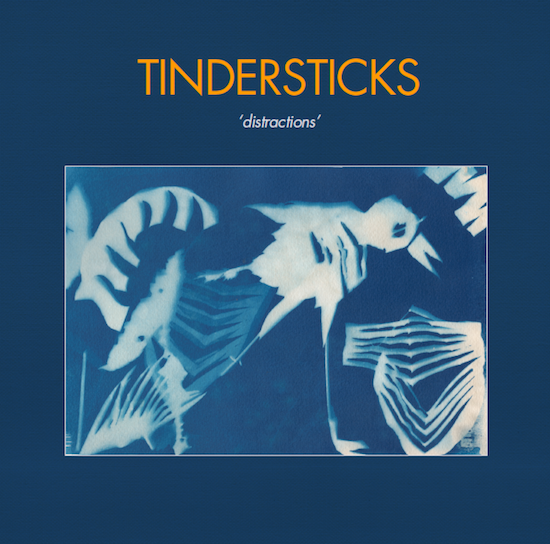