I guess there are two ways of reviewing an album. Number one – dive straight in. That way there are no prejudices, no forced connections, just a natural instinctive reaction to the music.

Number two – do the research, find out about the band, their attitude and approach and what they are about. That way you can get a better insight into what they want their music and lyrics to express.

Oh, I forgot – there’s a third way. See the band live, first hand and - referencing reaction from the vibe, band and music – react to the album accordingly. Warning: alcohol consumption during the gig may seriously cause a live versus studio sonic disconnect.

Option1? Nah. I chose Option 2. Evidenced based facts. You can’t beat them. As it turns out Option 3 would have been difficult if not impossible with TV Priest as they’ve only managed one pre-lockdown gig, and that was in an industrial freezer in Hackney accompanied on stage by a deep fat fryer. “Here’s some music – do you want fries with that?”

So, who are they? London based TV Priest comprise childhood friends Charlie Drinkwater (vocals), Alex Sprogis (guitar), Nic Smith (bass) and Ed Kellan (drums). Charlie has a sideline that you may already be aware of – he designed the cover artwork for Sports Team’s debut record as well as the most recent album from Fontaines DC.

TV Priest have a very spontaneous attitude to song construction. Using a mix of live jams and Charlie’s observational and topical notes and scribbles from scraps of paper, they build up songs piece by delicate piece, taking the mixed collage of music and sound to the studio for mixing and refining. The band literally record and mix everything themselves.

As such “Uppers” was 10 months in the making, very much a product of these - and I hate this phrase, but needs must – unprecedented times. Indeed, there’s evidence of this in the track “Journal of a Plague Year”, which you’d think would be an obvious pandemic reference, but is in fact the result of Charlie reading a Daniel Defoe book and discussing as part of a psychogeography session how London would cope with a plague, and how has it been shaped by the past. Whatever’s behind it, the song certainly fits in well in context – prescient it certainly is.

So, enough of this background stuff Steve – what’s the album like? It’s certainly a stressful record – there’s angst a-plenty on display here, delivered in Charlie’s unique intonation that will draw obvious references to The Fall’s Mark E Smith.

The music itself has a healthy knack of slewing off now and again into interesting territory, evidenced on the track “Power of Ten” where the spoken lyric over feedback drenched guitar slides into an ambient final coda that in itself has connections with the instrumental track “History Week” with it’s doomy keys, scratchy wave like sonics and shimmering guitar.

Powerhouse opening track “The Big Curve” sets the scene with a bass line that Jean-Jacque Brunel would be proud of, swirly organ and a great guitar break – “Where do you sit on the Big Curve?” asks Charlie.

The band are not afraid to wear their left leaning political affiliations on their sleeves, with references to Farage/Brexit/NHS and “sunny uplands” on the more poppy of the selections, “This Island”, and there’s nothing wrong with that. As Charlie says in an interview with Dork, “Bands like Sports Team, who I think have been unfairly maligned because politics are in their songs...aren’t the enemy you know?

The aforementioned Journal of a Plague Year” with its thudding drums and undulating riff is a highlight where the band demonstrate – again – they aren’t afraid to let the music talk as much as the lyrics.

TV Priest can be proud of this debut offering, and clearly they need live gigging to build on this release. As Charlie states in his Dork interview “Man I miss it – I can’t believe we’ve only played one gig – what a mad position to be in”

Well worth a listen then, and one thing’s for sure, when gigging returns TV Priest will be as hot as a ticket dipped in a deep fat fryer... 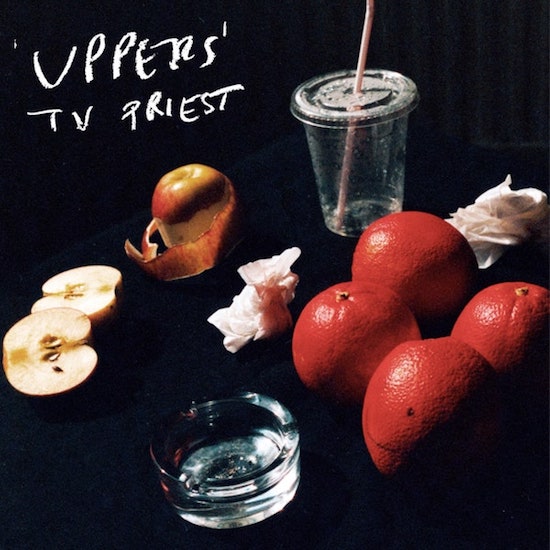