In a career of nearly 40 years Love and Desperation is Rick Shea's 12th album which as recording finished during 2020 is a product of musical distancing. The recording sessions started at Rick Shea's (guitar and vocals) studio in Southern California and the whole process finished with Shawn Nourse (drums and percussion), Phil Parlapiano, David Jackson and Skip Andrews (Accordions), Steve Nelson, Jeff Turmes and Dave Hall (Bass) adding their parts from their own recording bases.

The necessarily socially distant recording techniques do not detract from the quality of the final product; as Rick says “The natural sound of this record is a testament to how good these guys are.” But like most of us he missed the benefits that more immediate contact brings “But it's hard to beat getting a group of guys into a room together.”

'Blues At Midnight' has a strong Blues feel features Rick using his musical education playing the bars and the honky tonks of San Bernardino. The musical theme continues with (Down At The Bar At) Gypsy Sally's where Rick imagines the cast of characters drinking in the bar owned by Gypsy Sally who featured in Tecumseh Valley by Towns Van Zandt. 'She Sang of the Earth' is a lyric sent to Rick by Kim Ringer, daughter of the late Californian folk singer/songwriter Jim Ringer, features a delicate pedal steel and a lovely fiddle melody from Jim Shirey.

The pace slows for a couple of ballads.'A Tenderhearted Love' which Rick dedicates to his wife and features some beautiful pedal steel and a Van Morrison style “Sha-la-la-la” vocal, which complements the feel of the track. 'The World's Gone Crazy' reflects the times we live in and contains a simple message of hope “you better hold onto the ones you love.”

'Mystic Canyon' is named after one of Rick's favourite hiking trails. The picked out guitar part gives you the impression that you could be up there on a ridge above the canyon looking contemplatively to the horizon alongside him.

A couple of the best songs feature Rick's late father-in-law Johnny Moyeda, a strong storyline and some superb accordion playing. 'Juanita (Why are you so mean?)' imagines the first meeting between Johnny and the woman who would become his wife playing hard to get during their courtship and the final track is 'Texas Lawyer' an update of an older song of treachery and deceit on the Texas / Mexico border, in which Johnny provided the Spanish refrain.

There's a strong feel of country music, blues and folk on 'Love and Desperation'. The dominant instrument alongside Rick's sublime guitar is the accordion which gives many of the tracks a strong Cajun flavour. If you like a cool musical mix of a variety of roots styles then check out 'Love and Desperation', you'll be delighted. 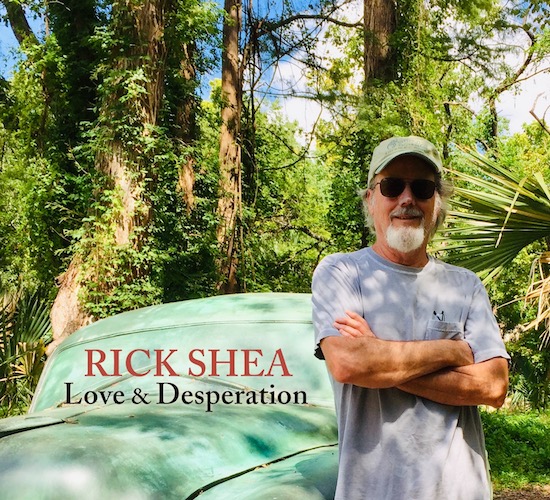