The Lone Bellow - Half Moon Light

What sounds like a piano from a western saloon bookends the almost fifty minutes, of the latest album from The Lone Bellow. The short intro leads into ‘I can feel you dancing’, a diamond of a track, warm storytelling Americana with brass!

'Half Moon Light' was produced by Aaron Dessner of the National at his studio in upstate New York and features guitarist Josh Kaufman and drummer J.T. Baites.

‘Good Times’ is a widescreen song in the mode of Broken Social Scene in full flight. ‘Wonder’ has a ‘Gracelands’ feel. The opening lyrics “I’m sipping on cheap coffee, listening to Gracelands’ is the giveaway along with the backing vocals. The song is a gem.

The three-part harmonies and songwriting are joyous and thought provoking throughout. “I want it to bring comfort,” Brian Elmquist says. “But it’s not all hard conversations. There’s a lot of light and some dancing that needs to happen...We try to invite as many people into the process to see what we can make together. I like that collaborative spirit and that freedom. Then, the songs speak for themselves.”

‘Wash it Clean’. ‘All my life I have tried to let you go but, you stay” A gentle love song which is just quite lovely. The band really have, over the fifty minutes this record lasts, produced that career defining album full of stories and sublime musicianship over the many twists and turns on the record.

Having relocated to Nashville a few years back the band stayed where they were recording this time. This record marked a return to recording in New York with Bruce Dessner, whom the band counts as both a hero and a comrade. “

We already had a friendship with Aaron and a strong, shared understanding of our musical vision,” Williams says. “It’s really important to us to be a part of a community of musicians. We like the collaborative, communal way of making something. Aaron showed us a new way of trusting and collaborating. His idea of bringing in Josh and J.T. was such a beautiful gift. The meekness that these friends brought to the table was something that we will never forget. A sense of controlled fury. Lightning in a shoebox.”

In support of 'Half Moon Light', The Lone Bellow played two shows in London at St. Pancras Old Church recently and return in May for some more shows.

The Lone Bellow are Zach Williams, Kanene Donehey Pipkin and Brian Elmquist –'Half Moon Light' is released via Dualtone Records on 7th February 2020 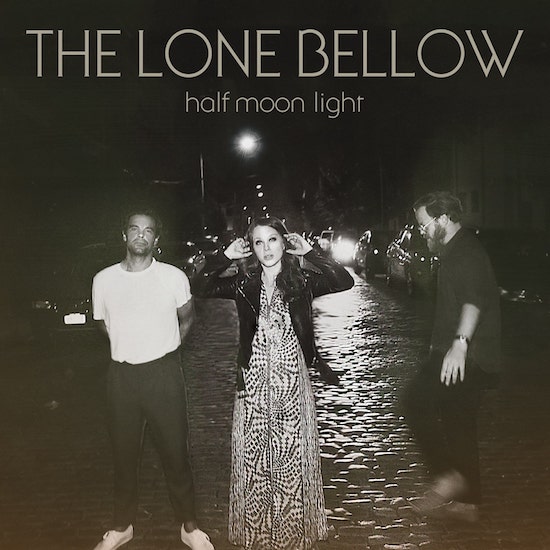